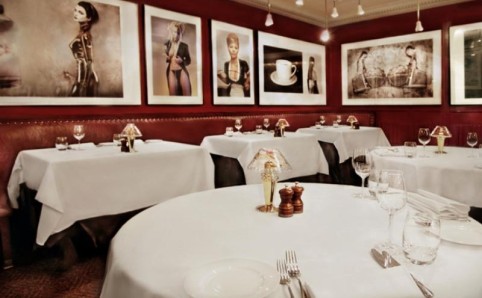 New Dabbler addition Luke Honey writes about food, drink and the finer things in life over at his blog The Greasy Spoon.Today we take a trip to the revamped Wheeler’s, one of London’s most established fish restaurants, where Luke is wondering about the decorum of the decor…

I had been looking forward to eating at the new Wheeler’s for months. The old Wheeler’s was an established fish restaurant (beloved by many) but in latter days a chain, which died a slow death after it decided to serve up pre-cooked dishes, manufactured in a warehouse somewhere, delivered by White Van Man and then re-heated in the restaurant kitchens. Marco Pierre White launched the new brand in 2009 in a joint enterprise with Sir Rocco Forte of hotel fame. The new Wheeler’s incidentally, is on the site of the old Madame Prunier’s fish restaurant in St James’s Street.

Now I happen to have my golden Fauntleroy locks shorn next door at a vast expense, and over the last year or so, had often sauntered past Wheeler’s of St James’s. It looked dreadfully smart from the outside, and dreadfully expensive. It turned out that I was to be utterly wrong on the first count, and utterly correct on the second.

A few weeks ago, Mrs Aitch very kindly decided to treat me to dinner for my birthday. We decided to head for Wheeler’s. The front of the restaurant looks promising- a tiled, fin de siècle style oyster restaurant of the old school, albeit empty; although our faces were to fall when we led into the main restaurant: a cavernous hanger, painted in a shiny red gloss (worthy of a tart’s boudoir or a 70’s Strikes 1926 burger joint), uncomfortable black lacquered cane seated cafe chairs, and decorated with semi-pornographic Bob Carlos Clarke photographs, of gigantious proportion. Look, heavens, I’m no prude, but there’s a time and a place for everything, and I have to admit that I found the prints utterly distracting. There I was supposed to be looking at the lovely Mrs Aitch, but instead, found my eyes drifting towards nubile derrières, clad in oh-so kinky, skin-tight shiny black rubber.

I suppose the two big celebrity chefs of recent years have been Marco Pierre White and Gordon Ramsay. Rock n’ Roll Aristocracy versus Footballer’s Wives. Of the two styles, I infinitely prefer the former: all Wiltshire long barrows, covert coats with velvet collars and Bristol motor cars. And St James’s is very much my sort of place. There’s that endlessly fascinating warren which is the London Library, the understated Budd of Piccadilly Arcade (where you can buy those knitted silk Mad Men ties and super smooth pajamas), Christie’s in King Street, that slightly naff bronze statue of Beau Brummell in Jermyn Street, the impeccable shoe and shirtmaker, New & Lingwood and probably the greatest bookshop in London (and quite possibly the world), Hatchards, where, under the addiction of some form of bibliomaniacal crack-cocaine, I  have spent my inheritance over the last twenty years.

The potted brown shrimps were good. Mrs A thought her smoked eel a trifle bland, and her Halibut Provençal “passionless” (her words). My halibut was reasonable, if a trifle dry. The caulifower cheese was fine, and the braised red cabbage, excellent. We ordered the Gavi de Gavi and were told by the sommelier that it wasn’t cold enough, and that they wouldn’t recommend it. I found this slightly annoying. Why have a wine on the list, if you’re incapable of selling it?  Am I being unfair?  But service was fine, and the sommelier was charming- a substitute Italian white was conjured up immediately at the same price.

The restaurant was more or less empty apart from an odd looking clientele. To our left, a silver-haired military type (in dubious regimental tie) entertained a svelte gentleman with a David Niven moustache (possibly Nigerean?). They moved tables to be out of ear-shot. Were they planning a parachute drop on the former Nyasaland? Otherwise, there were some nonagenarian Teutons with bulbous girths, reminiscent of Baron Bombast in Chitty Chitty Bang Bang. And a sprinkling of goofy-looking American tourists. Swinging London it wasn’t.

It was all a terrific shame. It wasn’t bad, but it wasn’t especially good, and for the money Scott’s or J. Sheekey would have been a better choice. And Mein Gott, Wheeler’s was expensive. Jaw-droppingly expensive. It came to £162 for the two of us. This didn’t include a pudding, and we stuck to the less expensive items on the menu. Dressed Cornish Crab with sauce mayonnaise cost £15.50, Wheeler’s Classic Fish Pie is £15.50, and Terrine of Foie Gras is £14.50. Mrs Aitch found it all a bit formulaic, and I think she is right: I’m not entirely convinced that Marco has had much to do with the restaurant, apart from lending his name to the enterprise and dropping by to say “hello” from time to time. Four and a half out of ten. Sorry.

17 thoughts on “Marco Pierre White at Wheeler’s of St.James’s”