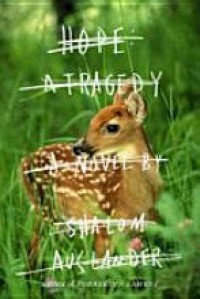 It’s safe to say that the next Dabbler Book Club selection is a publishing one-off. This month you have the chance to win a copy of Shalom Auslander’s unlikely novel Hope: A Tragedy.

Hope: A Tragedy is a hilarious and haunting examination of the burdens and abuse of history, propelled with unstoppable rhythm and filled with existential musings and mordant wit. It is a comic and compelling story of the hopeless longing to be free of those pasts which haunt our every present.

Not quite the full picture. This is how last Sunday’s review in The Observer begins:

It would have been interesting to have been a fly on the wall when Shalom Auslander pitched the idea for his latest book to his agent. One imagines the conversation would have gone something like this:

“I want to write about the Holocaust.”

“A guy discovers her living in his attic. She’s a bitter old woman who swears, eats dead birds and defecates down air vents.”

How to get a free copy of Hope: A Tragedy
If you are already a member of the Dabbler Book Club you will automatically be entered into the draw. If you haven’t already joined, all you have to do is sign up below. It’s free.

After that, you don’t have to do anything. All members will be automatically entered into the ballot for one of 10 free review copies, which will take place on Tuesday 14th March. We’ll email the winners, at which point you can opt out if you really don’t want that month’s choice and would rather another member got the chance.

We’ll be reviewing Hope: A Tragedy in the next month or two, and you can contribute your thoughts (though you’re not obliged to.)

Thank you to our friends at Picador for kindly providing the books.

Ts &Cs: All entrants will automatically be entered into the Dabbler Book Club. This means that you will receive occasional emails from us about the next monthly book and other offers. However, we will not pass your details on to any third party and you can unsubscribe at any time by emailing editorial@thedabbler.co.uk and requesting to be unsubscribed. Winners will be drawn at random from the Dabbler Book Club members at 12pm on Wednesday 14th March 2012. The judges’ decision is final. The Dabbler reserves the right to offer an alternative prize or to offer no prize and withdraw the competition at any time for any reason. More competitions are available at Free UK Competitions.

2 thoughts on “Get a free copy of Hope: A Tragedy by Shalom Auslander”