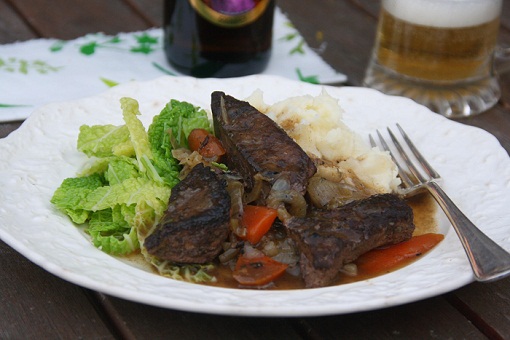 Do innards, entrails and other wobbly bits still have a place in the kitchen? Jassy Davis thinks so and starts our series of offal recipes with a dish of baked livers and mash…

Offal isn’t everybody’s bucket of entrails. Some people’s eyes light up at the prospect of piling their plate high with organs and wobbly bits, but for most people in Britain the fifth quarter is something they’re only prepared to encounter in sausages, and even then they’d rather not know what’s gone into their banger.

Offal’s lot has been one of a slow, steady decline in the UK. It was given a bit of a fashionable fillip by Fergus Henderson, who’s been promoting nose to tail eating in his restaurant St John since 1994. With its butcher’s block menu of ox heart and chips, lamb’s tongue, and his signature dish of roast bone marrow with parsley salad, St John struck out into bits of the slaughterhouse most restaurants had long since abandoned.

It’s a philosophy that’s had a lingering affect. These days the easiest way to spot a fashionable foodie is to look for the person eschewing steak for sweetbreads and chitterlings.

But while the beau monde’s gourmets can’t wait to get their teeth around some tripe, overall offal consumption in the UK has halved in the past 30 years – we eat just 250g of offal each a year. At the risk of aligning myself with the country’s pretentious gourmands, it seems a pity to forgo the pleasures of entrails and innards. They bring texture, challenge and the flavour of hot blood into the kitchen. Not to mention being the only sensible and economic way to make good use of an animal’s death.

Liver seems like the easiest organ to begin with. It’s a bit of organ meat that seems to have escaped the lowly associations that dog other innards. Liver pâté has never made it off the menu and slices of pink pan-fried liver have a whiff of decadence about them, especially when served with a nice Chianti.

Calf’s liver sits at the top of the detox organ tree. Its smooth texture and delicate flavour makes it a good candidate for quick frying. Lamb’s liver is next, also good for frying pink as well as baking. Pig and ox livers are coarser and have stronger flavours, so they’re best braised until tender. For pâtés, chicken and ducks supply the richest slithers of offal.

In the UK there are two ways of serving liver that have hung on: quick-fried with bacon or baked with onion. I’ve opted for baking lamb’s liver with sweet, buttery onions, as it seems to suit the cold winter nights we’re being subjected to.

It’s not a long, slow braise. The lamb’s liver doesn’t need to be mellowed and softened with hours of cooking. Instead, it’s cooked until a skewer slides in easily, but the meat doesn’t fall off when it’s lifted from the dish. It means the liver still has some spring and chew to it, which acts as a nice contrast to the melting onions. Serve it with fluffy mash and squeaky steamed cabbage.

1. Preheat the oven to gas mark 4/180°C/fan oven 160°C. Melt 20g butter in a pan and add the onions. Season, cover with a sheet of greaseproof paper (or a butter wrapper), cover and sweat over a low heat for 15 minutes, stirring occasionally, until the onions are soft.

2. Meanwhile, slice the liver into thick pieces. Season the flour with salt, freshly ground black pepper and a pinch of freshly ground nutmeg and sprinkle over the liver.

3. Melt the remaining butter in a heatproof, ovenproof dish and fry the liver over a high heat in batches, turning, until browned and crusted. Set aside on a plate.

4. Pour the beer into the ovenproof dish and bubble, scraping the pan with a flat-bottomed wooden spoon, until the beer has reduced by half. Add the stock, carrots, thyme and bay leaf and bring to a simmer. Stir in the onions and slide the liver into the dish with any juices.

5. Cover and bake for 45 minutes or until the liver is just tender, but not overly so – stick in a skewer. If it goes in easily and the liver just clings on when you lift it, it’s ready. Serve with buttery mashed potato and lightly steamed spring greens or cabbage.

10 thoughts on “Odds and Sods: Baked liver with onions”