Town planning is predominantly a literary form. The boiling visions of the great city planners remain for the most part locked on the page, quaint and harmless. Writing, insofar as it is a way of bringing the imagination to heal, offers the planner a medium in which he can – imaginatively – tame the baroque and unpredictable growth of the city, and vent his own mania for order.

This is a great pity, of course. The world would be more picturesque were it filled, like Calvino’s Empire of the Great Khan, with Ideal Cities, and Floating Cities, and Radiant Garden Cities Beautiful. But wherever a visionary plan does intersect with the empirically real city, it is rapidly overwhelmed, subducted. Ideal geometry is no match for people, or capital, or time.

Take for example the Linear City of Arturo Soria y Mata. In a series of articles from 1882 onward, Soria theorised a single developed strip of no more than 500 metres in width, with a central tram and roadway and residential and commercial plots on either side of stipulated size and separated by smaller streets, at the intersections of which there would be kiosks and shops, and in the centre of which there would be schools, hospitals, courtrooms and so on as need determined. No point in the city would be more than a few hundred metres from the countryside.

This five hundred metre strip could be as long as humanity required, might ultimately stretch from Cadiz to Saint Petersburg, from Brussels to Peking. 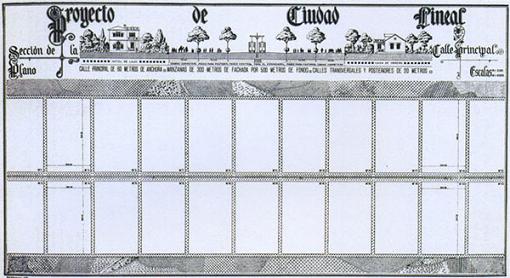 His vision was to unwind the city. In part this was a pragmatic response to the insanitary conditions of the industrialised cities of the nineteenth century, which he regarded as compacted, compressed and diseased organisms lacking proper anatomy. The Linear City, by contrast, would be a strong, healthy, vertebrate animal.

But Soria’s underlying organisational impulse was as ancient as cities themselves – the hankering for a rational civic geometry. Not a geometry in this case of ideal forms, but one which respected the underlying linear forces of the modern city: the railways and tramways, the telegraph and telephone, electric light and steam heat. The city had become an interlacing of lines and networks, draped inappropriately and uncomfortably over antique nuclear cities.

And it was not only rational to give play to the fundamental linearity of the city: it was moral. The straight line sanitizes, purifies, cleanses, it opens up to the light and air: there was to be no more rotten innerness. The straight line – the linea recta – had become prime in all planning.

In 1894 Soria managed to found a company, buy some land to the East of Madrid, and start work on his tramway. The initial plan was for a 55km belt running North to South which would act as an attractor for suburban development, but Europe was already old, all the land had been parcelled up long since, and it proved impossible to put together more than a 5km stretch which was no sooner completed that it was absorbed by the wholly unplanned and riotous expansion of the city.

Of course the Linear City was doomed not only by the contingency of Madrid’s expansion: it was corrupted by its own rationality. Unlike the Linear City, the world is three-dimensional. Thus any connection with an object lying outside the axis of the city – a source of raw materials, an outlet to a port – will create a node, a gravitational point, an attractor; the gentle pulsing flow (trams!) along a single trajectory will be interrupted or diverted, in places it will coagulate, atrophy, and in places accelerate, vivify. It will become, in other words, a city.

The Ciudad Lineal itself is now a leafy district of Madrid, ranged around the Calle Arturo Soria – as though his giant bones had been laid out and petrified.

It will no doubt amuse psychogeographers to think that the original linear city is still there, hidden, silently determining the health and well being of the (wealthy) inhabitants, as though Letchworth Garden City had become a near invisible suburb of London. But perhaps the reintegration of the Ciudad Lineal was apt. Soria was aware that all cities were now, in a sense, linear; perhaps he merely latched on to something that was anyway happening, the gradual opening out of the city. He simply states the logic more clearly. In his mind’s eye, the city is no longer a place of tortuous possibility, a garden of forked paths, but a contemplative ritual cursus, a salutary treadmill of the spirit. And while this is an interesting thought, it is of course a wholly literary one.