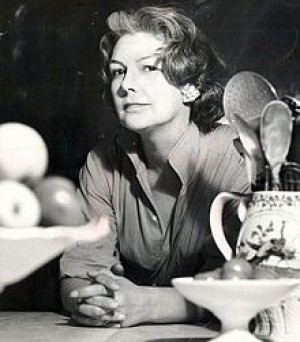 Next year (yes, we thought we’d get in first) will be the centenary of the birth of food writer Elizabeth David who, Toby Ash believes, still has more to offer the modern domestic kitchen than all of today’s celebrity chefs put together.

I just can’t imagine Elizabeth David stealing from Tesco. No, not Elizabeth. She was a no-nonsense type, blunt to the point of rudeness, who’d have been too busy regaling the fishmonger about her favourite bouillabaisse recipe rather than trying to filch a stilton and a couple of bottles of plonk.

I confess to having fallen just a little in love with David since I first discovered her books a few years ago. She was wilful, adventurous, determined and uncompromising. But for more than anything, I love her for significantly improving the quality of my life.

Born into a well-to-do family, David was sent off to the Sorbonne in 1930 to study art. It was there, whilst boarding with a French family, that she discovered her vocation:

I realised in what way the family had fulfilled their task of instilling French culture into at least one of their British charges. Forgotten were the Sorbonne professors…what had stuck was the taste of a kind of food quite ideally unlike anything I had known before.

But there was fun to be had first. After the Sorbonne she returned to England where she tried her hand at acting before running off with a married man with whom she sailed in a small boat to Greece. They were nearly trapped by the German invasion of Greece in 1940 but managed to escape to Egypt where they parted. She then ran a library for the British government in Cairo and put up with a brief marriage to a British army officer, before returning to Britain at the war’s end.

David found post-war Britain dull and grey. And, the food, of course, was absolutely terrible:

There was flour and water soup seasoned solely with pepper; bread and gristle rissoles; dehydrated onion and carrots; corned beef toad in the hole. I need not go on.

And so she launched her career as a food writer, introducing to her hungry audiences such exotic ingredients as pasta, parmesan, olive oil, salami, aubergines, peppers and courgettes. Over the course of her long career (she died in 1992) David wrote eight books and countless articles. In the 1960s she even opened a shop in Pimlico selling cooking paraphernalia, opting not to stock garlic presses which she famously (and quite correctly) described as being “utterly useless”.

Now the thing you have to remember is that David’s books are nothing like most of the recipe books that line the shelves of book shops today. They have lots of recipes in them – in fact I’ll wager her French Provincial Cooking has more recipes in it than all of Jamie Oliver’s books combined – but they are so much more than pretty instruction manuals. As Ruth Rogers, Co-Founder of The River Café, told me last year:

You can take any of Elizabeth David’s cookbooks to bed and read them as you would a novel.

David was a beautiful and observant writer. Her books weren’t banged out to coincide with a TV series; they were the product of in-depth, patient and sympathetic research. She was interested in the places she visited and the people she met. She wanted to learn and was able to listen. She could grasp the essence of a region, and food’s place within it.

Here’s an excerpt from her introduction to Provence:

Provence is a country to which I am always returning, next week, next year, any day now, as soon as I can get on to a train. Here in London it is an effort of will to believe in the existence of such a place at all. But now and again the vision of golden tiles on a round southern roof, or of some warm, stony, herb-scented hillside will rise out of my kitchen pots with the smell of a piece of orange peel scenting a beef stew. The picture flickers into focus again.

David opens up a whole new culinary way of life. With la haute cuisine “I am not here concerned”, she states in French Provincial Cooking. Instead, she offers simple food, simply presented; food that demands less time and expense “but if anything a more genuine feeling for cookery and a truer taste”. The book is full of simple, tasty and ingenious dishes that don’t require a mass of expensive ingredients. It’s a quick sauce here, a long simmer there; a dash of this and a handful of that. It’s the melted butter with Dijon mustard and lemon juice that transforms grilled fish. It’s the ground pepper and grated parmesan sprinkled over a bowl of steaming fennel. These are cooking tips that you can use every day to bring out the very best flavours from the food around you.

So did David really transform Britain’s eating habits? Well, she undoubtedly made a massive contribution to culinary life in Britain. But, let’s face it, for as long as we look for culinary inspiration from a four-eyed, bald chef making “the perfect” scrambled eggs by ramming a stick of dynamite up a chicken (or some such nonsense), we probably still have some way to go.