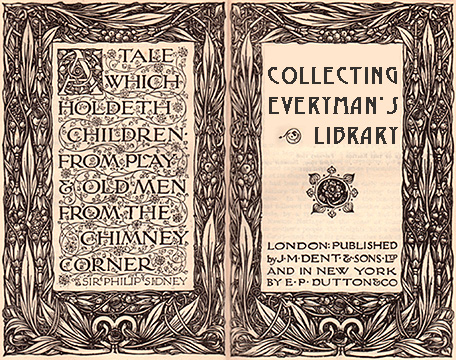 The charity shop where I happened on that indispensable volume, The Making Of A Moron, came up with the goods again soon after, when my browsing eye was caught by the title Far Away and Long Ago by one W.D. Hudson. That was what it said on the spine, and sure enough it was repeated on the front board: W.D. Hudson.

It was one of a series called Literature of Yesterday, published by J.M. Dent of Everyman’s Library fame, and, sure enough, it turned out to be a straight reprint of the Everyman edition of W.H. Hudson’s memories of his early years in South America, rebound in jazzy new boards in black and a rather sickly pale reddish orange in 1965. Naturally I bought it.

J.M. Dent himself was, it seems, unable to spell. Here’s Hugh Kenner in A Sinking Island:

Destiny beckoned J. M. Dent toward the kingdom of books, and without ever learning to spell he became an influential bookman. He was small, lame, tight-fisted, and apt to weep under pressure, a performance that could disconcert authors and employees. When his temper had risen like a flame he’d scream; the scream, one employee recalled, was what broke men’s spirits. His paroxysms were famous; a Swedish specialist thought of prescribing a pail of cold water for Dent to plunge his head into.

Not a man you’d want to have for a boss, then, but he was driven by the best of motives:

Dent’s ungovernable passion was for bringing Books to the People. He remembered when he’d longed to buy books he couldn’t afford. Yes, you could make the world better. He even thought cheap books might prevent wars.

Well, that didn’t work out, but Everyman’s Library was an astonishing achievement that must have brought millions of people of limited means into the world of books. They were handsomely produced volumes too (designed initially in Morris style, then freshened up by Eric Ravilious) – even if standards had slipped somewhat by the time of 1965’s Literature of Yesterday.