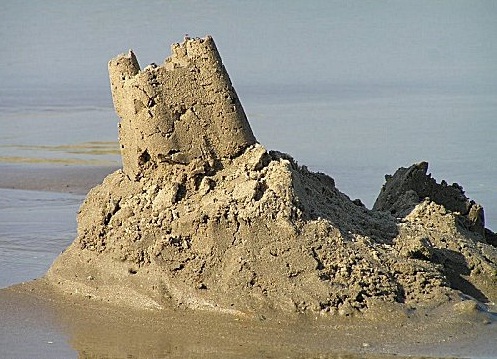 When he saw the title of a Dabbler post earlier this week, Frank Key found himself whisked back into the past…

All of a sudden I was six years old. We were on holiday, at the seaside, en famille, sur la plage… there is a reason why I lapsed into French. For I remember, as if it were yesterday, planting a paper flag atop the highest point of my – admittedly cack-handed – sandcastle when, emerging from the sea on to the sand there came a robot. It was huge, whirring and clanking, like a robot in a 1950s B-movie. It was plodding relentlessly towards my sandcastle. And it was a French robot.

I knew it was French because when it came and stamped my sandcastle flat under its thumping magnetic feet, it made a grating metallic noise of unmistakeable Gallic contempt. Small and spindly, I sprang at it and beat my tiny fists against its hard, shiny panels. I bruised my knuckles on a rivet and burst into tears. The robot clanked onwards, towards an ice cream kiosk.

The sun was shining and the waves sloshed against the sand. I sat, weeping and trembling, my morning’s work undone by a big French metal automaton. The joys of my childhood holiday lay in tatters, never to be regained. I had learned a hard lesson.

Curiously, no one else in my family witnessed this tragedy. Neither my papa nor my mama, nor my siblings, nor my aunts and uncles, nor the dozens of cousins there with us that day had any idea what I was babbling about as I wailed my tale of woe. They claimed I must have been daydreaming. Urgently, with a quivering rivet-bruised hand, I pointed towards the ice cream kiosk, over on the promenade near the bandstand and the pavilion… but the French robot had already passed on, clutching a choc ice from the kiosk in its big metal hand, making its implacable progress into the town, and beyond, on to the Downs, to harrow and ravage everything in its path.

The following day my game of crazy golf was disrupted by a giant plodding whirring clanking Belgian robot, but I cannot quite recall how that panned out.

6 thoughts on “Another Sandcastle And A Different Robot”