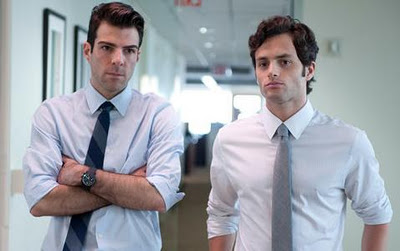 The Epicurean Dealmaker writes anonymously, insightfully and wittily on the world of investment banking, the first because he works in the industry as a senior M&A banker. If you want to understand, and even find amusing, the rarefied and controversial world of high finance you won’t do much better than to follow his blog and twitter account.

Margin Call is on general cinema release and available on DVD and Blu-Ray.

Marty: “When I left, I joined the Army, and when I took the service exam, my psych profile fit a certain… ‘moral flexibility’ would be the only way to describe it. I was loaned out to a CIA-sponsored program, and we sort of found each other. That’s the way it works.”

Debi: “So you… you’re a government spook?”

Marty: “Yes. I mean no. I was before, but I’m not now. Uh, but that’s all irrelevant, really. The idea of governments, nations is public relations theory at this point.”

Marty: “That’s very complicated, but I think in the beginning it matters of course that you have something to hang on to, you know, a specific ideology to defend, right? I mean, taming unchecked aggression, that was my personal favorite. Other guys liked live free or die, but you know… you get the idea. But that’s all bullshit. And I know that now. That’s all bullshit. You do it because you’re trained to do it, you’re encouraged to do it, and ultimately, you know, you… get to like it. I know that sounds… bad.”

Marty: “No no no. A psychopath kills for no reason. I kill for money. It’s a job. That didn’t sound right.”

Your Dedicated Bloggist and Dilettantish Cineaste finally got around to watching Margin Call in the private screening room of the Volcano Lair yestereve, O Dearest of All Readers. Because I am feeling unaccountably magnanimous this evening, I thought I would share with you a brief report of my reactions to the film and a few thoughts which it inspired, out of the goodness of my heart. While you must not expect great film criticism, I believe I can offer a little professional insight which may enhance your experience should you decide to view it.

For let me first say that I recommend the movie unreservedly, not only to professionals within the investment banking industry but also to outsiders still in possession of their moral compass. The lighting, cinematography, casting, and dialogue is, for the most part, pitch perfect, and the movie conveys exceptionally well the mood and atmosphere of the sales and trading end of a big investment bank. The story is simple enough: a junior risk manager played by Zachary Quinto takes over a risk model from his recently fired boss and mentor; he discovers his bank has already begun to seriously violate risk limits in the structured trading book it maintains to warehouse mortgage-backed securities it structures and sells for enormous profit; he concludes the firm faces potential losses which could wipe it out entirely; and he runs his warning up the chain of command, where it ultimately lands in the lap of the firm’s CEO. Where and with whom, as the saying goes, the shit decisively hits the fan.

The film takes place over approximately 36 hours, starting from mass firings at the bank during one trading day, Quinto’s fateful discovery that evening, the hurried, all-hands meetings and consultations among firm management overnight, the liquidation of the firm’s toxic portfolio the following day, and a coda the following night. It is an ensemble performance, and Quinto, Penn Badgley, Paul Bettany, Stanley Tucci, Kevin Spacey, Demi Moore, Simon Baker, and Jeremy Irons all do excellent work. Just like real life, there are no heroes, and just like real life the characters spend little time reflecting or moralizing about how they got into this mess. They decide, they act, and just like most corporate bureaucrats they limit their moralizing to variations on “I told you so” and “It’s your fault, not mine.”*

The moral center of the film is carried by Kevin Spacey, who plays the slightly sallow, squidgy Head of Sales and Trading, a 40-year veteran of the firm with the scars to prove it and a personal life in tatters. He is the only one who stands up to Irons’ CEO when the latter decides to liquidate the firm’s entire portfolio of MBS securities. Tellingly, however, his objection is that dumping these toxic securities on unwitting buyers in a fire sale will destroy both his and his salespeoples’ reputations and careers, not that selling securities you know are about to implode to clueless counterparties is wrong per se. Also tellingly, the film is honest enough to show Irons overcoming Spacey’s scruples with a big, fat check, and Spacey accepting it because he “needs the money.” No-one is innocent here, except perhaps those too junior and ignorant to have done more than act as cogs in the immense corporate machine. The callow immaturity of Penn Badgley’s 23-year-old, who gossips about the rumored wealth of his superiors while his firm teeters on the brink of annihilation, is the film’s answer to those who might think that innocence begot by ignorance is some sort of virtue.

Like anyone who works inside the temple, I do have some minor quibbles with the way the film portrays my industry, but they are of little consequence.** The investment bank is able to extricate itself, at some considerable cost, it seems, from its predicament over the course of one trading day. This keeps the story clear—save yourself and your firm at the cost of your counterparties and your reputation—but correspondingly unrealistic and oversimplistic. Any bank which really faced such circumstances would find its distress telegraphed within minutes of commencing its liquidation, with the consequent disappearance of buyers, massive selling by everyone else in the market, and determined financial attacks on its funding and asset base by hedge funds and lenders alike. No bank could withstand the kind of massive markdowns of its inventory, sold or not, which the movie portrays without calling its very existence into question. Margin Call is not a realistic depiction of what happened to Bear Stearns or Lehman Brothers.

Nor does the movie attempt to explain the financial crisis, or any large component of it. It depicts nothing outside the walls of the firm or actions of its characters. It is a miniature, which drops the viewer in medias res, to look at the behavior of high-powered, well-paid professionals under considerable pressure. It is a study in how bureaucratic organizations respond to life or death threats, and what people who have little choice do to survive. Like most survival stories, it is not a pretty sight.

Perhaps the people in my industry are more callous and calculating than others. It is certain we are more willing than some to sacrifice our own in the name of survival. But I will leave it to you, Dear Reader, to decide whether Margin Call is simply an indictment of investment banking, or an indictment of humanity itself.

* Nor are there any cardboard cutout villains, unless you consider naked ambition, backstabbing, scapegoating, buck-passing, and covering your ass villainy. I, on the other hand, consider those standard corporate policy at any organization larger than twenty people.
** No CEO of a major investment bank would wear his hair as long as Jeremy Irons, for example. Period.