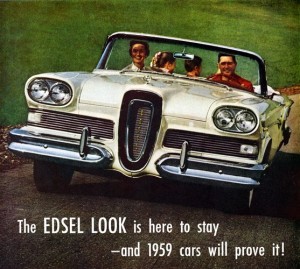 The Ford Edsel was launched on ‘E’ Day, the 4th September, 1957. It was so big, it had its own television special on October 13th, called The Edsel Show, featuring Bing Crosby, Frank Sinatra, Rosemary Clooney and Louis Armstrong. Research and development had gone into overdrive to create the Edsel; this car was jam-packed with modern technology. But production ended on 19th November, 1959. No car has ever been less successful. Only 2,846 of the 1960 model made it off the production line. And The Ford Motor Company lost £350 million (around £2.5 billion in today’s terms).

Theories abound as to why car sales flopped. Some say it was down to technical malfunctions, especially with the push-button gears in the steering wheel. For others, it was the extreme styling: the vulva-shaped radiator grille, and thunder-thigh tail fins. It’s also thought that the name, Edsel, used in honour of Edsel Ford, group president and son of Henry Ford, sounded too much like a tractor named Edson. But perhaps this was simply the wrong car at the wrong time?

Whatever the reason for its failure, the Edsel is more popular today than it ever has been. Fewer than 10,000 Edsels survive, and are now collectors’ items. A mint Citation convertible is likely to fetch over $100,000. What’s more, many of the Edsel’s features, such as transmission lock on ignition, self-adjusting brakes, steering wheel gear selection and multiple colour combinations, which were considered impractical in the late 1950s, are now standard features of modern sports cars.

The Edsel was advertised as the world’s “easiest car to handle “– if you could switch on a lamp, you could drive it:

The car’s marketing was heaped with souped-up, saccharine advertising-speak: “When they move from the line, who can say what unexpected pleasures they will bring and to whom?” One of the Edsel’s key selling points was that it provided a means to “far-flung travel joy.”  On this note, Ford funded a series of cheesy, travel-inspired advertorial films like this one, where a doctor takes his chocolate munching, ‘seen-and-not-heard’ wife on holiday, via a cattle market, to the Okefenokee Swamp – just start watching, and you’ll soon be hooked…

Episode 2 includes a hillbilly version of Amazing Grace that’s better than anything from the Waltons… though you may need some earplugs.

There’s another fascinating promotional film called West to the Tetons too. I’ll leave you to find that one for yourself…

Of course, the saddest part of the legacy is the Edsel graveyard.

7 thoughts on “Cult Cars: The Edsel – A Fashionable Failure”