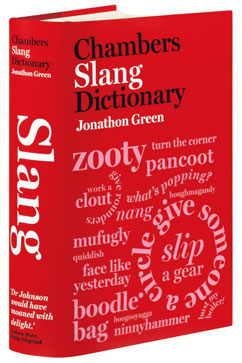 This week Mr Slang has teamed up with quiz-master Brit Snr (the editor’s Dad, no less) to give you the chance to win a copy of his splendid big fat red Chambers Slang Dictionary…

I have been dabbling for twelve months now. There or thereabouts. Many posts, many words, many slang words. The time has come for payback. The challenge: a quiz of fiendish complexity (well, parts of it defeated me). It comes in the form of a monologue in various forms of slang. It is not of my composition, but that of the peerless Brit Sr. against whom many of you have already pitted their wits. The aim, no surprises here I am sure, is to offer a translation of the following story. I would say that all the words have been used in posts, but that ain’t so. But they can be found, and the story pieced together.

A word-for-word ‘translation’ is not expected; a pertinent précis will do, but the more text that is offered the better your chance of success. Should accuracy prove beyond reasonable expectation, I’ll also consider entertainment value.

Post your translation in the comments or, if you’re shy, email to editorial@thedabbler.co.uk  by next Thursday.

The prize is a copy of my Chambers Slang Dictionary. All the usual caveats and provisos apply and this being slang, all bribes, sexual favours and other inducements will be favourably considered. Failing those, may the best Dabbler win.

‘In the balloon car of the pothouse’…

A Slang Story by Brit Snr

There I am, in the balloon car of the pothouse, nursing a wallop and eyeing a well-advertised hornbag, when in mopes Willie the Dip, former cutpurse. Before, he was a bomb-head, but now he looks all Sad Sack, snaky- bony and real mangy. Anyway, I get him a tenip and a young and frisky and require of him his doings.

“Well,” says he, “my life been a mommux all right. I set up this three balls biz, but I was a bit of a gagger on the side, you know. Worse luck, one o’ of me punters was a fizgig. Next I knowed, Uncle Nabs ‘as me in a goldfish bowl for a little jaw. Sad to say, the buzzimag is kosher, so I get dropped in the bucket, right? Buzzkill it were, in rumbo. I ‘ad to sport fish roll, an’ I was in with sharks, Jimmy Sangsters, nummers….skrunty types all, most on ‘onch, lots totally abram. They give you the stink-eye and ‘ang a shanty on you for nada. I jus’ stayed shrumpy. Couthed up, I were, an’ took the gaff.

An’ the gooby, Man, it were gross. Gunky red ‘orse, gamy red mike an’ cold thousands. But one little boy blue, this grundiguts walrus, took a schmear OK so I got consumption sticks and some red ‘eart. Comin’ down the ‘ill’ I got a better seg wiv a skinner, ‘e were just a dromedary in for an ‘oliday.

When I got out me biz were gone, so I were a cadaver, Man. No spon for Burton, even. So I been on the charlie. When I get mazoo I fill me tank, crack some suds or fire the bird. I got me an iron gentleman an’ a piece an’ I do a bit o’ drumming with me yaga, but I don’t really trust ‘im. If the busies done us a stingo, he’d come it strong as a horse, surely.

So, you got a ten for a bottle o’ henry berry, China?”

Well, this Willie was always a yarn chopper, but this time I weened him true, totally. I am fully escamado, specially re the gat. I go oopizootics and hand him a pony and my tick-tock. Then I gave it the toes.

He’s pinched that same night, I hear. Totally Brahms and Liszt and waving his roscoe in a creepjoint. Some marra, eh?