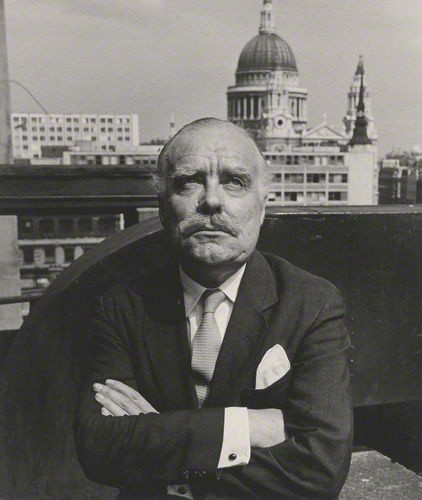 We take a look at the predictions of cartoonist Osbert Lancaster (1908-1986), who thought that any attempt to rebuild Shakepeare’s Globe Theatre would be laughed out of town…

With his tweedy outfits and otter-like head, cartoonist Osbert Lancaster was well known to households of the middle twentieth century. Magnificently named, Osbert rose to prominence via his front page slot on the Daily Express, creating cartoons which were universally admired, though fixed in an upper class milieu of gentlemen’s clubs and country houses that many of the readers could barely imagine (he even provided the illustrations for Nancy Mitford’s Noblesse Oblige). Affecting the air of an edwardian gent, he thus seemed an anachronism in person, and as his topical cartoons lack the historical import of say, Low or Giles, he cannot claim their longevity and these days remains largely forgotten amongst those under 40.

But there is still much to admire and it is in his various architectural treatise that his legacy lies, as many of his observations remain perceptive and strangely up to date. In the same way that the condensed but humorous history of 1066 and All That stuck in the minds of countless schoolboys far more tenaciously than any dry textbook, Lancaster’s brief and witty outlines of fashionable architectural styles are easily absorbed and recalled.  It’s his interiors that shine, where in just a few carefully placed penstrokes he captures a snapshot of the fixtures and inhabitants of a medieval long hall or an art deco flat. As with all good craftsmen, Lancaster was adept at making the complex appear simple, and though the drawings look basic, much thought went into carefully capturing the perfect clothing and furniture to match the period. It’s a testament to his ability that his nonclamenture of various modern styles was taken up by the public so strongly that some are still in use – such as Stockbroker Tudor and Pont Street Dutch. Here’s Lancaster, writing on the afformentioned Tudor in 1964:

Four posts round my bed
Oake beames overhead ,
Olde rugges on ye floor,
No stockbroker could aske for
more.

In interior decoration the antiquarian enthusiast’s cherished ideal, relentlessly and all too successfully pursued, was a glorified version of Anne Hathaway’s cottage, with such mass-produced modifications as were necessary to conform to transatlantic standards of plumbing.

In construction the Tudor note was truly sounded: in the furnishing considerable deviations from strict period accuracy were permissible. Thus eighteenth-century four-posters, Regency samplers, and Victorian chintzes all soon came to be regarded as Tudor by adoption – at least in estate agency circles. Soon certain classes of the community were in a position to pass their whole lives in one long Elizabethan daydream; Spending their nights under high-pitched roofs and ancient eaves, their days in trekking from Tudor golf clubs to half-timbered cocktail bars, and their evenings in contemplating Mr Laughton’s robust interpretation of Henry VIII amid the Jacobean plasterwork of the Gloriana Palace.

It was foolishly supposed at the time that the height of absurdity had finally been reached shortly before the Second World War when it was seriously proposed to build an exact reproduction – only naturally three times the size – of the original Globe Theatre in Southwark to which patrons were to be ferried across the river in Elizabethan skiffs rowed by Elizabethan seamen.

However, this fortunately never achieved triumph of misplaced ingenuity paled beside the actuality of the half-timbered buffet cars with which soon after the war British Railways equipped certain of their more widely publicized express trains.