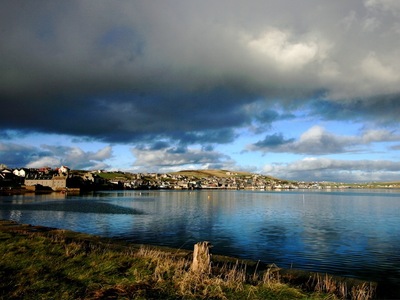 I’m reading Edwin Muir’s autobiography, recommended here by masterly commenter Jonathan Law. As JL remarks, the account of his childhood is terrific. He seems remarkably able to inhabit a child’s perspective – I’ve only witnessed it being done as well in Joyce’s Portrait of the Artist as a Young Man.

I didn’t anticipate that becoming a father, as I did for the first time six years ago, would so powerfully revive memories of one’s own childhood. It all becomes quite fascinating again; there’s a sort of dialogue going on between the childhood being lived out in front of you and the one you recall in memory. (By the way, there’s quite a lot of new fatherhood spreading amongst the people who manage this blog – congratulations Brit! and to Worm for his recent production! – so you might expect us to go on a bit about this subject, you know how it is).

In this passage, Muir denies being able to recall the particularities of the child’s vantage point, the way they lose themselves in intense observation, only to go ahead and do it:

I can still see the scarlet dress and the sailor suit; I can see the rough grey stones spotted with lichen on the top of the Castle, and a bedraggled gooseberry bush in a corner of the garden whose branches I lovingly fingered for hours; but I cannot bring back the feelings which I had for them, the sense of being magically close to them, as if they were magnets drawing me with a palpable power. Reasonable explanations can be found for these feelings: the fact that every object is new to a child, that he sees it without understanding it, or understands it with a different understanding from that of experience – different, for there may be fear in it, but there cannot be calculation or worry; or even the fact that he is closer to things, since his eyes are only two or three feet from the ground, not five or six. Grass, stones, and insects are twice as near to him as they will be after he has grown up, and when I try to re-create my early childhood it seems to me that it is focused on such things as these, and that I lived my life in a small, separate underworld, while the grown-ups walked on their long legs several feet above my head on a stage where every relation was different. I was dizzily lifted into that world, as into another dimension, when my father took me on his shoulders, so that I could see the roof of the byre from above or touch the lintel of the house door with my hand. But for most of the time I lived with whatever I found on the surface of the earth: the different kinds of grass, the daisies, buttercups, dandelions, bog cotton (we did not have many flowers), the stones and bits of glass and china, and the scurrying insects which made my stomach heave as I stared at them, unable to take my eyes away. These insects were all characters to me, interesting but squalid, with thoughts that could never be penetrated, inconceivable aims, perverse activities…

Naturally, I had to splash out on a second-hand copy of his collected poems. In this one he evokes childhood day-dreams, those uncounted minutes spent watching dust-motes, waves, clouds or swaying branches, and idly considering the mysteries.

Long time he lay upon the sunny hill,
To his father’s house below securely bound.
Far off the silent, changing sound was still,
With the black islands lying thick around.

He saw each separate height, each vaguer hue,
Where the massed islands rolled in mist away,
And though all ran together in his view
He knew that unseen straits between them lay.

Often he wondered what new shores were there.
In thought he saw the still light on the sand,
The shallow water clear in tranquil air,
And walked through it in joy from strand to strand.

Over the sound a ship so slow would pass
That in the black hill’s gloom it seemed to lie.
The evening sound was smooth like sunken glass,
And time seemed finished ere the ship passed by.

Grey tiny rocks slept round him where he lay,
Moveless as they, more still as evening came,
The grasses threw straight shadows far away,
And from the house his mother called his name.

Muir grew up in Orkney, but that was written from a very distant land.

6 thoughts on “Edwin Muir and Childhood, near and far”