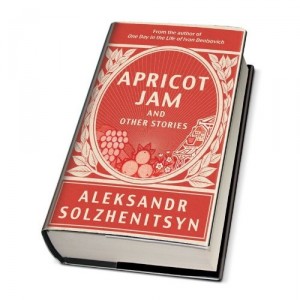 In a little less than a month we mark the twentieth anniversary of the fall of the Soviet Union. I haven’t seen a single mention of this fact. Perhaps there will be a flurry of documentaries noting the occasion closer to the date. However, one can’t imagine there being any sort of ceremony or thanksgiving. The twenty-sixth of December 1991 is clearly no VE Day.

On finishing Apricot Jam, Solzhenitsyn’s final collection of short stories written largely in the ’90s, I wondered whether there might be anything new to say about the Soviet experience. I suspect not, for the immediate future at least: historians have made excellent use of the relatively brief period when the Soviet archives opened and, before them, the odd historian and a rather greater number of memoirists and novelists laid bare the violent and mendacious nature of Soviet Communism. But now I’m rather wondering whether, even if there were something new to say, anyone would be listening.

Why is this? Despite Soviet communism’s existential threat to the West, I suspect any feelings of celebration, or even relief, at the anniversary of its demise are mitigated by guilt. What have we done with our victory? Right now it feels as if we’ve squandered it on dodgy mortgages, bank bonuses and wide-screen TVs (it may well be that people in the BRICs and CIVETs have a different view).

I also suspect that for many a progressive leftist intellectual the end of the Soviet experiment was not an unalloyed joy. After all, the event should mark the end of about two hundred years of abstract philosophical speculation on how we might break through to an earthly paradise. The project still provides an end-of-the-pier show for the odd intellectual clown, such as Žižek. But, on the whole, the futures we are presented with by the idealistic and disaffected today are either rather dark environmental visions, which deliberately reject Enlightenment optimism, or whatever can be meant by the demand to ‘replace capitalism with something nicer’. Not so much fun for an intellectual in that thin gruel.

This is as it should be. Our ‘capitalist system’, as we persist in thinking of it, doesn’t exist as one of a number of radically different options. As Kenneth Minogue put it (much more pithily than I did): ‘capitalism is what people do if you leave them alone’. The lack of specifics in the programmes of the Occupy movements – indeed, their lack of programmes – is a result of the exhaustion of credible alternatives. Post-’91, radical economics, as a galvanising, potentially popular basis for change, is mined out. As far as I can see, what we’re left with to fuel criticism and reform is old-time morality, but cut-off from much of the religious underpinning that gave it general meaning and applicability.

Apricot Jam, like the work of other honest and genuine writers marked by the Soviet experience, isn’t political polemic. It relates the experiences of individuals. As such it blows away the abstractions to reveal the lies and the violence that underpinned them. What’s more the stories come from all perspectives: my favourite is a potted memoir told as interior monologue by the epically effective Soviet general, Georgi Zhukov. One doesn’t just learn why people hated Soviet communism, one comes to understand why some felt huge loyalty to it.

However, Solzhenitsyn’s work doesn’t seem simply a warning from history, a sort of literary inoculation that will help stop such political experiments happening again (though it certainly may be this: A Day in the Life of Ivan Denisovich, read as a schoolboy, haunts me still). What I find really interesting about it from today’s vantage point, is that it sets up the question of where we might go next. Once you’ve told all these individual stories, and once the story of the country they inhabited has been told, and for Solzhenitsyn, once your own story is coming to an end… the question that hovers at the end of the book is ‘what’s next?’. You won’t find Apricot Jam spoon-feeding you an answer – Solzhenitsyn is too much the artist for that.

For Solzhenitsyn, post-Soviet Russia is a moral wilderness, where people struggle to make coherent and decent choices. But the hope lies in individuals continuing to struggle: his characters may be repeatedly compromised but they’re simply not capable of escaping a sense of morality.

Apricot Jam, then, has special interest for us right now. Whether we choose to mark it or not, we in the West live in a post-Soviet world, one in which we are assailed by problems but surrounded by doubts. Apricot Jam contains a subtle, profound and damning critique of Soviet communism. However, whilst we can hardly help interpreting it as an implicit justification of liberal democracy, this certainly wasn’t the conclusion Solzhenitsyn himself came to. The truth of his observation, made in 1978*, has only become more pertinent:

I have spent all my life under a Communist regime, and I will tell you that a society without any objective legal scale is a terrible one indeed. But a society with no other scale but the legal one is not quite worthy of man either.