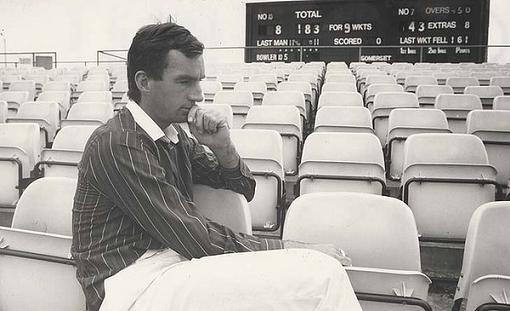 Jon Hotten pays tribute to the writing of controversial cricketer-turned-journalist Peter Roebuck, who died after jumping from a hotel window on Saturday…

In front of me is It Never Rains, Peter Roebuck’s diary of his 1983 season with Somerset. It’s waterstained and foxed, the page edges an uneasy shade of yellow on account of it spending a couple of years in the bottom of my cricket bag. It was there because he wrote it around the time I was playing semi-seriously. A while later, another of Roebuck’s books, Tangled Up In White, was in there too, and I used to take plenty of stick for reading them in the dressing room.

Tangled Up In White contained an epic piece about Dean Jones’ 210 in Madras, an innings that Roebuck sketched, unforgettably, through the conditions (a nuclear sun, its microwave heat), fragments of dialogue (Border: ‘quit if you want, we’ll get a Queenslander out here’) and harrowing notes on Jones’ physical and mental deterioration (dry heaves, urinating at the crease, hallucinating in the shower, on a drip at the hospital). It was impossible to read without being stirred for your inconsequential club game, your appointment with the local quicks…

It Never Rains played a wholly different role. It was the first book I’d read that was equivocal about the game, that made it okay to feel ambiguous about something that dominated your life. It was self-aware, knowing, courageous in its way. Roebuck found cricket and his efforts at playing it funny, ridiculous, poignant, hubristic, bathetic in the sense that it switched from the everyday to the unrepeatable, and slightly, darkly heroic, too.

The start of the season is beset by rain, endless and total, that sends him indoors for hours and hours on the bowling machine. Roebuck’s confidence grows and grows until he strides out for his first innings of the year and lasts one ball. As the summer reaches its height, he’s in the grip of a six-week depression that concludes on the first day of August with the simple words, ‘no entry’. It’s a book full of such cadences, the rhythms of real life. There are the identikit ring-roads and fuming pub grub of the touring pro, the grinding tyranny of the fixture list, the recognition of unfathomable talent far out of reach (Botham, Richards and Garner are perched in their corners of the Somerset dressing room), and the comforting quirkiness of any team, anywhere (Colin Dredge, the Demon of Frome; Dasher Denning, the manic opener). Any cricketer will read it and just know.

What I remember most though is the passage where Roebuck hears that he might be considered for England, and realises, down in his heart, that he doesn’t really want to be, or at least that he is profoundly uncertain about it. That admission, and his honesty in revealing it, rounded the game out for me, completed it in my head. This was why it was great – because it was not easy. Somehow, the joy of it was increased by this. Whether you played cricket, wrote about it, thought about it, lived it or watched the odd highlights programme when there was nothing else on, you could never exhaust it. It was, and always would be, too rich, too human and complex, for that.

Roebuck knew it, too. As obituaries often do, his have turned up some tremendous stories. When he went for his interview for Millfield school his parents went as well, and were both offered jobs. According to Wisden, he was just four feet two inches tall when he debuted for Somerset seconds as a thirteen year old. He once wrote a newspaper piece about the decline of Richard Hadlee and then had to bat against him at Trent Bridge – he made a double hundred, that was, the Notts spinner Andy Afford tweeted, ‘scored entirely off his gloves’. Mark Nicholas once sidled up to Roebuck and said that the pair of them were the two best cricket writers around. ‘Who told you that,’ snorted Roebuck, ‘your mother?’

He was an anachronistic man, which probably cost him. He should have lived in the 1950s, not now. Off the field, he had a rock-solid intellectual confidence that enabled him to lead the sacking of Richards and Garner in favour of Martin Crowe – Botham pasted the famous ‘Judas’ sign over his dressing room peg. On it, the same intellect smothered his instinct. Someone described his stooped stance as being ‘like a question mark’. How perfectly appropriate that was.

Roebuck’s ‘conversion’ to being Australian was always amusing; he was the least Australian man on earth, and yet he found acceptance there after his conviction for assault. The great conflicts in his personality, expressed so well in It Never Rains, leaves an ambiguity over his death too. There is a (mostly) unwritten fear over what its circumstances will expose. Yet his books remain fundamentally true – and they remain in my bag, too.

Jon Hotten is the author of several brilliant books and blogs on cricket at The Old Batsman.