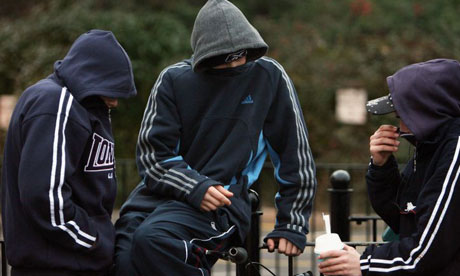 One of the great pleasures of living in Germany is not living in England. In Germany disaffected youths scrawl pointless graffiti and dress in bright primary colours; in England, they take and sell drugs, they torture and murder and rape, and upload these crimes to youtube. My students often ask if my horrible tales of England are exaggerated; I smilingly encourage them to go to Huddersfield, Bradford, Leeds, or Manchester on a Friday night, and judge for themselves. It isn’t that Germany has no criminality or gang culture, but that the English variety is more pervasive, more of an everyday spectacle. Gang culture is the default role model for the young in England, regardless of background; they aspire to dress, walk, talk, think, and act like characters from a gangster rap video.

Knight’s book is a grisly and plausible account of gang life in Manchester, London, and Glasgow. The Manchester scenes are familiar. No need to live in Longsight: in my old home of Didsbury (a posh suburb) I passed a chav, screaming “I’m gonna bleep cut your bleep face, you bleep bitch!” into his mobile phone at about four o’clock in the afternoon. Everybody walked by as if this was normal; and in England, it more or less is.

But onto the book. Knight researched it the hard way, talking to street level crooks, following elite police units. Prefaced with a flat “Hood Rat is a work of non-fiction”, it nonetheless takes some liberties, to present inner mental states as in a novel. Overall, however, it rings true (to my experience). The first part, set in Manchester, begins with Anders Svensson, a cop on the elite anti-gang X-Calibre unit, picking up a low-level gangster from prison, the fittingly-named Whippet:

Whippet’s muttering to himself, running his hand back and forward over his Jamie Foxx buzz cut. ‘I don’t need no babysitter,’ he says, glaring ahead. The side of his mouth twists back as if snagged by a fish hook. ‘I’m respected. Old school.’

The detail with the fish hook; I immediately remember just that vicious, involuntary snarl, the orclike malevolence – not from Whippet, but from hundreds like him, in the city centre, on the bus home, hanging around the hospital where I worked. Svensson employs Whippet as an informant; he is after the big players, Merlin and Flow – both under 35, both lethal. Seen principally through Svensson’s eyes, the Manchester section is grisly and captivating. Svensson is almost a Michael Mann cop: confident, driven, a loner; but unlike Mann’s heroes he doesn’t live in a millionaire’s palace or drive a millionaire’s car:

The secret of Merlin’s success is his ability to exert absolute control over the people around him, something Svensson has never seen on this scale before. Merlin is thirty-one and rumoured to be making serious money. […] He earns £700,000 a year. This is £668,000 more than Svensson. On the other hand, the more murders there are, the more overtime Svensson clocks up.

The Manchester section is the most satisfying, with a clear “hero chases villain” storyline; Merlin and Flow are put away for 30 years each (after Merlin fires his lawyer and tries to conduct his own defence), the murder rate goes down, and Svensson goes to see them in prison, Merlin giving him a friendly hug each time. In true Michael Mann style, Svensson is himself a creature of the terrain he patrols:

But whenever he goes away on a job Svensson misses Moss Side. He wonders what he will do when he retires. Maybe he will just come and drive round here.

The London section is bleaker, mainly told through the eyes of Pilgrim, a Jamaican, and a group of homeless Sikh junkies. Pilgrim’s father

brought his son over from Jamaica at the age of eight, out of a life without electricity or water, and now here the boy is on his nineteenth birthday, a fully-fledged man gangster. He is baffled how this happened.

How it happens: boys are recruited by older gangsters, used for petty errands, drug selling, then murders:

‘Them are Tinies. Eight or ten. You see that a lot now. They’re less likely to be stopped by the police. Their gang leader is about fourteen.’

‘They go younger than that. Babies are getting involved. You know by the time you is fifteen you’ve been stabbed up so many times already you’re like a veteran.’

This is a society where the young are systematically trained.

The Somali gangs own the Havelock. They keep young kids in their school uniform dealing for hours in the stairwell of the tower block. Those who refuse are taken to the park, stripped naked and lashed with a whip. Then they are given a cup of tea and taken back to their mothers. One boy on a nearby estate was thrown naked in a lift with a pit bull and sent to the fifteenth floor. When the doors finally opened another gang member stood there filming him.

The schools are junior league prison. Families are impotent, where they exist. The surrounding culture is the determining factor; and it is a culture formed largely by gangster rap and its mores. The London section is not comfortable reading.

The last section, Glasgow, at least offers some hope – it details Karyn McCluskey’s campaign to break the cycle of gang violence, by bringing gangs together to hear brutal testimonials from ex-gangsters and victims’ families. Surprisingly, it works. But then it is not the “hug a hoodie” mollycoddling of David Cameron: it is old-fashioned in its morality, confronting the perpetrators with the consequences of their actions, stripped of hip hop posturing. Most of the gang members are not naturally sociopathic; they have been led to feel this is normal, that this is just how the world is:

All saying the same thing – it’s just this, that’s the way it’s always been, it’s too bad. You’ll never be able to fix it.

McCluskey, it seems, persuades them that this isn’t the way the world is, that it isn’t normal. This doesn’t take rhetorical tricks or special effects: it’s enough to take away the hip hop caricatures and show wounds and grieving mothers – to show things as they are. Knight has been criticised for not offering some kind of “insight” or explanation. I think it is unnecessary. To portray these lives is sufficient. A delicate order emerges, symmetries between different criminals, and between victims, and cops; it is not necessary to have any explicit agenda; it is enough to show these people as they are, and then one sees that they are all human, however darkly and strangely. As human beings, they make choices. McCluskey simply elucidates these choices, and their consequences. It seems this is enough, and Knight’s book, I think, serves a similar purpose – it shows things as they are, people as they are, all subject to the same world, making different choices.

2 thoughts on “Elberry on the Hood Rats”