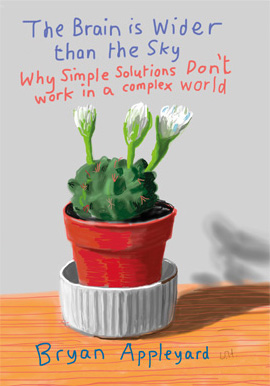 Bryan Appleyard has published a new book, and The Dabbler will be marking the occasion in suitable style. We have two signed copies of The Brain is Wider Than the Sky to give away (see below) and we also have an exclusive Q&A coming up.

But first, Brit reviews the book, and finds a writer whose “superpower is extreme sensitivity to the zeitgeist” and whose “role is to point out trends that are so big that we can’t see them”…

Bryan Appleyard has a knack for ice-breaking book titles. Brandish Aliens: Why They are Here or How to Live Forever or Die Trying in public and there’s a good chance that you’ll provoke someone to ask, “What’s that about?” This will be a hard question to answer, since to properly explain what a Bryan Appleyard book is about would probably require you to read the whole thing aloud from start to finish. They don’t easily reduce. But after um-ing and waving your arms around for a bit, you’ll likely end up saying, “Science and art” or, “The human condition” or, perhaps, “It’s about Everything.”

His latest work, The Brain is Wider than the Sky: Why Simple Solutions Don’t Work in a Complex World (Weidenfield and Nicholson, 10 November 2011), follows the trend. Its theme is the conflict between the urge to simplify and the true, unknowable complexity of the world and of human nature. It is not, however, a linear argument, nor is it a dialectic with a position set up and then knocked down. Rather, Appleyard gives us a series of self-contained essays from which an overall thesis gradually emerges. A quote from the Introduction defining ‘emergent properties’ could stand for the book itself: “These are things the system can do that are not predictable from the constituents of that system, because they do not arise simply as a sum of all the properties of the parts.”

The book’s chapters –  its constituent parts –  deal with matters as diverse as brain scans, financial systems, celebrities and artificial intelligence. Those familiar with the Appleyard modus operandi will know what to expect, but newcomers may be puzzled, for his is an unconventional method. There are a lot of negatives in this review because an Appleyard book is much easier to define in terms of what it isn’t. It isn’t strictly reportage, though there is plenty of first-person material. Some of this is harrowing (for his fMRI brain scan, Appleyard must recall bleak memories of his father’s illness and death). Some of it is funny. Before his meeting with Bill Gates, Appleyard is advised by a Microsoft PR woman that he’ll want to collect his thoughts: “Perhaps, I thought, this was a room specially set aside for thought collecting prior to a meeting with Bill Gates.” Meanwhile, the academic Samir Zeki is a “small, bald seventy-year-old with a gleaming, Yoda-ish face…His room, like every other room I have ever seen in UCL, is a mess – piles of books, furniture near collapse and all illuminated by the weak glow of a pale, greyish sunlight of a type that I have only ever seen in this place”. Appleyard could, if he chose, write a very amusing book on the scientific community in the sort of deadpan English gonzo style peddled on television by Louis Theroux.

But The Brain is Wider than the Sky isn’t that and nor is it popular science, though there is much scientific and philosophical exposition. As his blog readers will attest, Appleyard has an exceptional writer’s gift for elegant concision, being able to capture the essence of a difficult idea and express it – and then its counter-idea – in a minimum of words. For example:

Teleology is the belief that nature itself is goal-directed, that it is moving towards something, whether that is the kingdom of God or the just society… A hard-line teleologist might argue that the ape was purposefully moving towards evolving into a human… But this, to the materialist, is mysticism. On the other hand, teleology is all around us. A mouth and teeth assume a future which involves food… without this form of teleology, the world becomes incomprehensible.

Over the course of a 200-plus page book this has a gripping but slightly dizzying effect, as Appleyard loves nothing more than spinning merrily across centuries of theory in dense, linked paragraphs. This was true of the sci-fi-packed Aliens (his best book, prior to this one), of How to Live Forever and, especially, of Understanding the Present, his remarkably prescient but confusing 1992 anti-scientism history of science. Yet Appleyard is not a populariser in the manner of, say, Richard Dawkins, aiming to simplify arcane or complex subjects for the layman. If anything, he’s the opposite: a complicator of pre-popularised science, forever pointing out ways in which proponents of scientific theories make over-simplistic claims, and often doing so by reference to rather melancholy poetry. In this sense, The Brain is Wider Than the Sky is the book he’s been working towards for years, since simplification is its subject and poetry is at its heart (the title comes from Emily Dickinson).

The emergent thesis of the book is that virtually all areas of human activity– from finance to aesthetics – are unfathomably complex, yet science and technology continually seek to simplify human behaviour  – or, at more of a stretch, ‘human nature’ – for the convenience of problem-solving machines (he cites the example of the automated ‘Press 1 for further options’ call centre systems). In doing so they either threaten what is worthwhile about humanity, or else disintegrate into philosophical incoherence.

Neuroscience is the key example: fMRI technology seeks to link physical bloodflow in the brain with intangible mental properties like creativity or emotions, thus bridging the gap between the material and the immaterial and solving the’ hard problem’ of the correlation between mind and matter. Yet, as Appleyard points out, neuroscience doesn’t even have a viable theory against which to test its observations. Scanners show activity in the brain when subjects think creatively, but we have no idea whether the observable brain activity is causing the creativity or results from it. For the author this is consoling (a favourite Appleyard word) because human aesthetic and emotional capabilities are irreducible – Emily Dickinson’s poem cannot be meaningfully described in purely physical neurological terms, any more than the true value of the Mona Lisa can be meaningfully described in terms of the paint’s chemical properties, or Bach’s music in terms of sound wave frequencies. Where technophiles seek to simplify us, they should be resisted.

Not all of the chapters seem relevant to this thesis. I didn’t follow the point about immersive computer games, which don’t strike me as qualitatively any worse than other hobbies that obsessive people can get obsessed about (football fanaticism, fishing, or gambling, say). Nor do I worry too much about reality shows like The X Factor, the interactive element of which is supposed to be manipulating the public in disturbing ways. To my mind the red top tabloids are far more malign than any form of public or celebrity manipulation that TV or technology have yet contrived.

However, this doesn’t matter since yet another thing that this book is not, is a polemic. Appleyard’s villains are the utopian extremists such as Ray Kurzweil, confidently predicting the imminent ‘Singularity’ when computers will be more intelligent than humans by orders of magnitude. But he does not rail against his enemies, he exposes them by gently putting them in context (though he is much more combative on his blog, interestingly). Appleyard’s superpower is extreme sensitivity to the zeitgeist, and his role is to point out trends that are so big that we can’t see them. Judgement on those trends is secondary. This makes him hard to place and probably hard to sell, because we are so used to polemicists whose arguments can be neatly encapsulated in a blurb or review.

I loved the final flourish on extremophiles – those countless organisms that thrive in places previously deemed impossible, such as below the ocean bed or in incredible heat. Their discovery is what makes science great: it reveals the depth of our ignorance. In the end, where I most approve of Appleyard is that he is an unashamed generalist in an increasingly splintered and specialised academic world. He is interested in everything, so his books are about Everything. Where science and art  try to ignore each other, Appleyard  tries to get them to talk (he ends, optimistically, with the union of art and technology in David Hockney’s iPad paintings, one of which adorns the cover).

Intelligent generalism is the essence of The Dabbler, of course (and ‘The Yard’ was inadvertently instrumental in this site’s genesis, since many of the founders ‘met’ in the comment section of his blog). Specialists, particularly in science, tend to despise generalists for presuming to comment on subjects which have become their life’s work. But wise, disinterested generalists are essential to our culture’s wellbeing, because only by bringing perspective and context to the narrow obsessions of the experts can we hope to hold them to account.

We have two copies of Bryan Appleyard’s new book, signed by the author, to give away.

For your chance to win, just join the Dabbler Book Club (it’s free) if you haven’t already done so by midnight on Friday 2 December 2011. The winner will be drawn at random from members.

One copy is reserved for members of  The League of Dabblers (join here), who have a much greater chance of winning, and will be drawn at random on the same day.

Ts &Cs: The judges’ decision is final. The Dabbler reserves the right to offer an alternative prize or to offer no prize and withdraw the competition at any time for any reason. More competitions are available at Free UK Competitions.

17 thoughts on “Book Review: The Brain is Wider than the Sky by Bryan Appleyard”