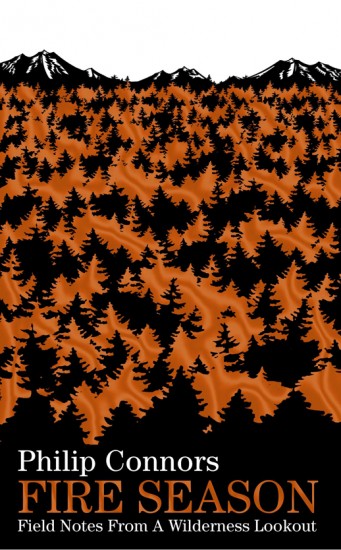 I came to this book via the usual marketing soundbites: masterwork, unforgettable, profoundly absorbing, absolutely compelling, and so on. Not many books can live up to such praise, and Fire Season: Field Notes from a Wilderness Lookout (Macmillan)  falls short. While I enjoyed the book, I did so in a grudging and slightly pissed-off way, as having been defrauded of my time and attention. I had expected something on the lines of Tintern Abbey or Weekend at Bernie’s – a sublime, almost religious work of art. This was too much to expect.

It certainly has potential. Connors abandons the city for a summer in a fire lookout, Kerouac-style. He circles around his solitude, the sublime; and the day to day details of fire watching: clearing rat shit, calling in fires, crawling like the serpent across a snow drift; encounters with bears, hikers, lightning, fog. He also dips back into Kerouac, Thoreau, and the history of firefighting in the American wild.

Despite my disappointment, it’s a worthwhile, sound read. I was only really disappointed by the attempts to describe solitude and the sublime; these sections never moved beyond the obvious, not surprising since they have been so abundantly treated in, for example, Wordsworth, and there is little left to say. So, of a mystic hiker we read:

Coming down off Fuller Ridge in California, over a landscape charred by a wildfire, he felt himself overcome. He leaned against a dead tree, gripped it for balance. The tears began. His nose ran. He felt every emotion at once: sadness, anger, joy, horror, love, hope, despair; every cell in his body quivered in anguish and ecstasy. He both lost himself and felt himself more intensely than at any other moment in his life. And in the aftermath of this moment – this vision, this transcendence, this coming into the world, this death and rebirth – he felt emptied and calm. Ready to begin his life anew. Open to mystery and beauty, reconciled in some ineffable way to loss.

“It was as if I had tapped the source of some divinity,” he says. “Our language does not contain the words to describe it. Perhaps a better way to say it is that some divinity coursed through me; I became the conduit. I was holy and I was nothing and I was inseparable from the world around me, no boundary marking the charred landscape and my self and where they met and merged.”

I don’t question the experience but the expression is, for me, prosaic, the more so as it attempts to rise to peaks of poetical prose. Connors doesn’t have Kerouac’s rhetorical flair, or Wordsworth’s genius. He can have these experiences, but he can’t express them.

My grumblings aside, there is much to enjoy. The book’s real strength is in observation, of what is evidently there. Connors has a good eye, unsentimental but warm, human. His vision of nature is variegated and complex: there are bears (interesting and dangerous), tarantula hawks (horrifying), and an abandoned fawn (mortal). He tries to rescue the fawn, enduring violent sneezing fits in the process. The Game and Fish Department instruct him to leave it to die. He doesn’t quite know what to do and nor does the fawn or his dog, Alice:

The fawn even comes to Alice and crouches beneath her in search of a teat, and Alice simply stands with her legs splayed and looks at me, uncomprehending and perhaps a little scared. Much of the day she barks into the trees at the edge of the meadow; barks seemingly at nothing, at phantoms. As if to say: Do not come near the fawn. Do not prey on the defenseless.

The passage would be stronger if Connors had cut at “seemingly at nothing”. His strength is in observation rather than interpretation (though I guess he is right here). There is, luckily, enough pure observation to keep things going, and Connors has good instincts. The history of fire management in America is well told, and reveals much of mankind’s attitude and response to the wild. So for years fires were suppressed, resulting in a build up of highly flammable matter – resulting in megafires, if you like. Fires are surprisingly good for trees, in a sense:

Sixty years on, the McKnight Fire even begins to look like a blessing. Without it we’d have been deprived of one of the biggest aspen stands in America and much of the wildlife that love it. Its multi-level, herbaceous understory offers foraging, nesting, and denning habitat for all sorts of mammals and birds. Elk and deer browse young aspen sprouts and songbirds nest in the softwood cavities of mature trees. Though aspen tend to colonize fire-disturbed areas at high elevation – they arise in shoots from a shared root colony in what are properly called not trees but ramets – once in place they’re largely burn-resistant, providing a natural barrier to fire’s spread into surrounding coniferous forest. Fond of fire but resistant to fire: how’s that for evolutionary genius?

With such details, the book survives its marketing.

One thought on “Book Review: Fire Season by Philip Connors”