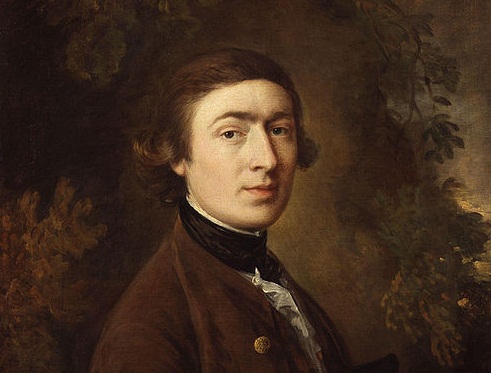 Our friends at Slightly Foxed (the real readers’ quarterly – buy a subscription now!) have once again kindly allowed The Dabbler to dip into its rich archives.

If the figures of history are paraded before the mind’s eye, century by century, once the 1750s are reached one seems suddenly to be looking through a zoom lens. The procession of more-or-less august personages, remote and rather incomprehensible, conventionally portrayed and stiffly posed, and speaking or writing in stilted formulae, is elbowed aside by an animated and colourful crowd, all in close focus. Their faces and their pens are equally lively: here at last are men and women with whom we would like to converse, at whose jokes we could laugh, and with whom it would be our good fortune to become friends.

One does not have far to look for the reasons. British portrait painting was entering its most glorious period, lifted to the highest level by native-born painters like Allan Ramsay, Henry Raeburn, Joshua Reynolds and Thomas Lawrence. If this was partly the result of an increase in self-awareness among the sitters, then perhaps this also explains the outburst of correspondence and journal-keeping at the same time from, for example, Horace Walpole, Lady Mary Wortley Montagu, the poets Thomas Gray and William Cowper, Fanny Burney, James Boswell and Parson Woodforde. Most people, if the name of Thomas Gainsborough were thrown into the ring, would be more than happy to add him to our list of painters. It is only those lucky enough to have come across his letters who will know that he is also more than worthy of inclusion in the ranks of the writers.

In trying to pin down the qualities that make his paintings so outstanding people have used phrases like ‘shimmering fluency’. Something of the same can be discerned in the letters, which are immediate, sparkling, conversational in their flow. The Reverend Sir Henry Bate-Dudley, a friend of and sitter to Gainsborough, wrote of the ‘ease’ and ‘nervous force’ of his correspondence: ‘a selection of his letters would offer to the world as much originality and beauty as is ever to be traced in his painting!’ Another friend, William Jackson, organist of Exeter Cathedral and would-be landscape painter, said it was, ‘like his conversation, gay, lively and fluttering round subjects which he just touched, and away to another . . . his correspondents, considering the letter as part of their friend, had never the heart to burn it’. While his contemporaries may have cherished Gainsborough’s letters, they were too much for the nineteenth century. A bundle of them, on which someone had written, ‘Brilliant but eccentric . . . too licentious to be published’, disappeared. Only 110 letters have survived, which should please those readers for whom short books are the best. Anyone turning to them for discussion of public events of the period or for social commentary will be disappointed. Instead they will find much on how he painted, his views on portraiture, on his patrons and his family, on landscape painting and on music – these last two were his real loves.

Gainsborough’s life divides into three periods: his Suffolk childhood, his training, marriage and early work in London and then back in Suffolk; his time in Bath from 1759; and his period in London from 1774. His father was, of all unlikely things, a shroud maker, but he produced two remarkable sons in Thomas and Humphry, who was a dissenting clergyman and inventor of a steam engine. The letters throw no light on Thomas’s training in the studio of that pioneer of the rococo style in England, the Frenchman Hubert Gravelot, or his study in the salerooms and dealers’ shops of the Dutch seventeenth-century landscapists; or, indeed, on his marriage to a natural daughter of the Duke of Beaufort in 1746, who brought with her an allowance of £200 a year.

This is because none survives from before 1753. Gainsborough did, however, remark in a letter of 1773 that ‘London was my first school, and deeply read in petticoats I am.’ From such early works as the famous double portrait of Mr and Mrs Robert Andrews sitting and standing on the edge of their cornfield (c1749, National Gallery) it can be seen that on occasion he was attempting to combine what he loved – landscape – with what actually brought in the cash – portraiture. 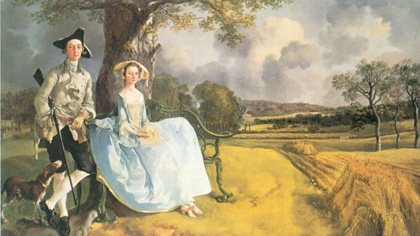 Gainsborough moved to Bath because, as he became more accomplished, he was outgrowing the East Anglian market for portraits, and there would be richer pickings at this smart spa, which attracted all the beau monde. His close study of Van Dyck and Rubens was leading to an ever more sophisticated style and his assurance now allowed him to tackle grand full-length portraits. He was soon a busy man, juggling his commissions, and having to come up with a good line in excuses for delays in completing them:

If I disappoint you . . . I’ll give you leave to boil me down for painters’ drying oil, and shiver my bones into pencil sticks . . . I wish you would recollect that painting and punctuality mix like oil and vinegar, and that genius and regularity are utter enemies, and must be to the end of time. I would not insinuate that I am a genius any further than as I resemble one in your opinion, who think I have no such thing as punctuality about me. In short Sir, I throw myself at your feet and thank God most sincerely that I am not any nearer to them, for surely you could not help kicking me.

In 1763 he caught venereal disease on a jaunt to London and was later dangerously ill, though in July he could still write jokingly to his friend and attorney Philip Unwin about a promised picture of the pregnant Mrs Unwin: ‘But my dear friend how shall I continue with you concerning Mrs Unwin’s picture? I pray Sir, could you not divert yourself with the original for one week longer? I hope Mrs Unwin is not so round but that you can bring that about.’ Gainsborough often longed to get away from the grind of what he called ‘face painting’, once complaining to William Jackson:

I am sick of portraits and wish very much to take up my viol da gamba and walk off to some sweet village where I can paint landskips and enjoy the fag end of life in quietness and ease. But these fine ladies [his daughters] and their tea drinkings, dancings, husband huntings and such will fob me out of the last ten years, and I fear miss getting husbands too. But we can say nothing to these things, you know Jackson, we must jog on and be content with the jingling of the bells, only damn it I hate a dust, the kicking up of a dust, and being confined in harness to follow the track, whilst others ride in the waggon, under cover, stretching their legs in the straw at ease, and gazing at green trees and blue skies without half my taste, that’s damned hard.

Although Gainsborough sketched from nature, his landscapes were really constructs of his imagination. The cantankerous Welsh landscape painter Richard Wilson described the trees and foliage in Gainsborough’s efforts as ‘fried parsley’. He spoke truer than he knew because Gainsborough built up model scenes as visual aids from bits of cork, coal, moss, mirror, lichen and sand, with broccoli standing in for the wooded background. Maybe the reason for this was that in his portrait painting he was always subject to the discipline of close observation, so was happy to get away from this by adopting such a bizarre alternative method. His methods when painting a portrait were also very much his own. He started them in subdued light, getting down the general form of his subject before increasing the illumination as the work went on. He was also reported as using brushes on six-foot sticks so as to be at the same distance from the canvas as he was from the sitter.

Gainsborough was adamant that he wasn’t going to turn his landscapes into ‘history’ paintings – that is, fill them with mythological, classical or biblical characters and episodes. ‘Do you consider, my dear maggotty Sir [Jackson again] what a deal of work history pictures require to what my dirty little subjects of coal horses and jack asses and such figures . . . as fill up a space (I won’t say stop a gap) or to create a little business for the eye to be drawn from the trees in order to return to them with more glee.’

Sir Joshua Reynolds, in his attempts to bring seriousness and prestige to his profession, was always promoting ‘history’ painting as the highest form of art, but as Gainsborough said, he ‘either forgets, or does not chuse to see that his instruction is all adopted to form the history painter, which he must know there is no call for in this country’.

With those aristocratic customers for whom he had respect, Gainsborough was soon on intimate terms, as shown in a letter to the Hon. Constantine Phipps, which he signed ‘Your Likeness Man’:

By God you are the only great man, except George Pitt, that I care a farthing for, or would wear out a pair of shoes in seeking after. Long-headed cunning people and rich fools are so plentiful in our country that I don’t fear getting now and then a face to paint for bread, but a man of genius with truth and simplicity, sense and good nature, I think worth his weight in gold.

He was also free with the politician Lord Shelburne when he felt Francesco Bartolozzi had done a less than adequate job of engraving Gainsborough’s portrait of Shelburne: ‘Why will Bartolozzi, my Lord, spend his last precious moments in fucking a young woman, instead of outdoing all the world with a graver; when perhaps all the world can outdo him at the former work?’ But he was clear-eyed about what a distraction to the artist upper-class patrons could be:

Now damn gentlemen, there is not such a set of enemies to a real artist in the world as they are, if not kept at a proper distance. They think (and so may you for a while) that they reward your merit by their company and notice, but I, who blow away all the chaff – and by God in their eyes too if they don’t stand clear – know that they have but one part worth looking at, and that is their purse. Their hearts are seldom near enough the right place to get a sight of.

In his last years Gainsborough fought with the Royal Academy, not for the first time, but he became the favourite painter of the Royal Family, ‘talking bawdy to the King and morality to the Prince of Wales’, as someone recollected. He died in 1788 and his last words – eminently quotable as is so much of his correspondence – were, ‘We are all going to heaven, and Van Dyck is of the party.’

ROGER HUDSON has worked in publishing all his life and has compiled a number of books for the Folio Society in which letters have figured largely. For him, nothing beats a good correspondence.