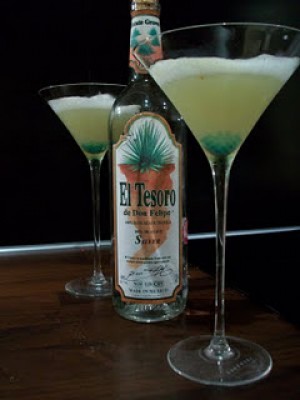 Have a cocktail, why don’t you? One of our editors was fortunate enough to try a couple of delicious ones at L.T.D at The Social, highly recommended and just two minutes walk from Oxford Circus. There he was fortunate to run into Will Lowe of Bibendum Wine, an expert in all things booze-related, including the intimate wonders of the cocktail.

Naturally, Will couldn’t resist the (strictly non-pecuniary) allures of The Dabbler when we begged him to become our Cocktail Correspondent (we think the title swung it). In his inaugural post he comes up with a novel resolution to a perennial debate.

Salt rim, or no salt rim?

This debate has divided the Lowe household for quite some time.

For years, the most obvious answer has been the classic “half-salt rim” solution. Half salted, half not, and everybody’s happy. Except they’re not, are they? Everybody’s half happy.

A new approach was clearly required. Enter the Cocktail Chemist.

Molecular Gastronomy has been working it’s way into the mainstream for some time now, spearheaded by names such as Heston Blumenthal. Molecular Mixology, its far more excitingly named cousin, has been lagging somewhat behind, but is definitely starting to emerge.

So what’s the answer then? Well, it’s air. Obviously.

Using a solution of lecitihin, salt, and mineral water, and mixing up a froth with a hand blender, it’s possible to make a very stable salt flavoured froth which will maintain it’s form for hours, and float rather attractively on the top of your drink (a margarita in this case).

Simply skimming the foam with a slotted spoon allows the excess liquid to drain away, allowing the ‘air’ to be added to the drink.

Of course, there is little or no point in going to this effort unless the margarita itself is top notch.

Using absolutely the best ingredients money can buy is essential. Scrimping and saving on cheap tequila is a false economy, which will be shouted loudly from your glass, no matter how much you try to drown it out with a cacophony of sugar and lime.

For this occasion, I opted for El Tesoro Blanco. Its fragrant, floral, highland 100% agave flavours are perfect for creating the delicate nuances I require in the margarita. Having been voted ‘Best Tequila In The World’ seven years running, it gets a lot of praise from the trade press, but is woefully absent from far too many bars. Not mine, I hasten to add.

The tequila was sweetened using an organic agave syrup, and shaken hard over ice with freshly squeezed lime juice. Delicious.

Almost finished, but something was missing. I wanted a citrus edge to come through right at the end of the drink, so created a citrus caviar which could be sunk to the bottom of the cocktail. This is a basic caviar concoction of soduim alginate, sugar, water, and an orange liqueur. Once formed and strained, they are ready for adding to the freshly double-strained margarita.

Next, we add the salt air, and we’re ready to serve. I was very pleased with the end result. More importantly, so was my long suffering drinks guinea pig, Mrs Lowe. The best margarita she’s ever had, she proclaimed. Praise if ever I heard it.

If all that chemistry was a bit much to follow, here’s a practical demonstration: