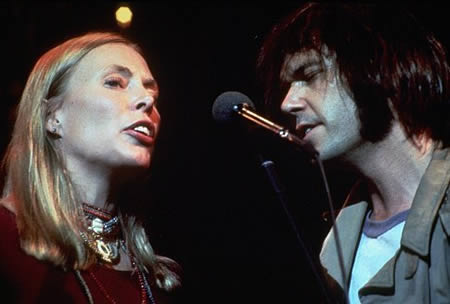 Leaving aside His Bobness who, for most of us, sits in very thin air atop Mount Olympus, there are a handful of greats still sucking in denser gas below him. Just the mention of their christian names, like Bob, identifies them to most music lovers. And the fact that two of these giants hail from Canada should be no surprise to anybody familiar with the Wainwrights, the McGarrigles, and a certain L Cohen – though a glance at that huge land mass (bigger than USA), and armed with the knowledge that each one of the 34 million folk that live there has almost 4 square km of space each, makes you wonder how those Canadian do it – and why we can’t do better. Perhaps it’s because they have 4 square km of space each?

Joni Mitchell, a near contemporary of Neil Young (below) was born in the frozen north-west of the Canada in 1943. Before Jonas Salk had developed his vaccine, she had fallen victim to poliomyelitis which left her with restricted use of her left hand, but her innate intelligence and musicality overcame this problem by a non-standard open tuning of the baritone ukulele she began with and later, the acoustic guitar she strummed to create her unique sound. Add to this a high, pure singing voice (amazing considering she is known as ‘one of the world’s last great smokers’), and an ability from an early age to write music as well as perform it, and you have perhaps the preeminent singer-songwriter working today, a sublime Lady of the Canyon. Here, in her late 20’s, she fiddles around with the tuning on an Appalachian dulcimer before laying out four minutes of magic on her composition California.

Born a couple of years after Joni in warmer Toronto, Neil Young was also caught-up in the polio outbreak that blighted her youth, diabetes adding to his problems. And ill health has stalked his life in the form of epileptic fits that he still fears, and a son with his wife Pegi, who was born non-oral quadriplegic. An earlier relationship with the flakey actress Carrie Snodgrass had also produced a disabled son. He is known as the Godfather of Grunge, but this odd title doesn’t begin to do justice to his wide ranging talent and interests. The music he listens to? Recently Beethoven and Wagner. The music he writes and plays is primordial and cataclysmic, and yet has an intense, homegrown, front-porch quality and, more often than not, a beguiling lyricism. On this rather cheesy vid there is a great example of that lazy lyrical touch on one of his standards, Harvest Moon, the corncrake voice still in great shape, the angst of Buffalo Springfield and Crosby, Stills and Nash a lifetime away.

Music runs like a seam of gold through the family of Randy Newman, a sassy Californian born just three weeks after Joni; his most famous relative, uncle Alfred, produced a hat-full of wonderful film scores in Hollywood. The owner of a mordant wit which he links to a deep melodic gift, and a capacity for hard work, he seems to improve with each passing year. A wonderful pianist, he composes for large orchestral forces, and is a highly skilled arranger. Influences are not obvious but, whenever I listen to one of his bittersweet ballads (see I Think It’s Going To Rain Today below), I am reminded of the composer Aaron Copland, the father of America’s wide open spaces; there is a yearning quality they both share.

Born in New Orleans 71 years ago Malcolm John ‘Mac’ Rebennack, or Dr John Creaux, or better still The Doctor, is as close to a living legend as we are likely to encounter in these pages. He began his colourful life as a guitarist, but a shooting incident in defence of a friend left him with a damaged ring-finger and he switched to piano, with spectacular results, mastering not just his native deep-south boogie, but a range of styles embracing Blues, Rock, Jazz and Zydeco, a form of Creole folk music originating in Louisiana. The result was, that in recording studios across the land, the phrase ‘Ring The Doctor’ was all you needed if a particular piano sound was called for. On Thanksgiving Day in 1976 he joined Robbie Roberson and the rest of The Band (all Canadians save drummer Levon Helm) on stage at the Winterland Ballroom in San Francisco to play Such a Night, and unknowingly became part of quite a night of music making, captured on film by Martin Scorsese.

6 thoughts on “Joni, Neil, Randy and The Doctor”