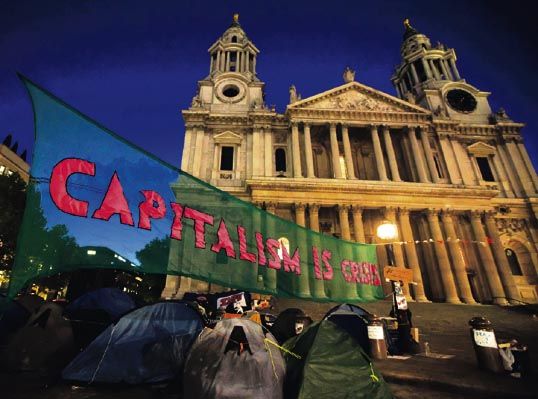 Capitalism for and against. There’s a lot of it about, mostly against. But, this thing ‘capitalism’ – it doesn’t really describe anything in particular, does it?

Capitalism, at its most basic, is an arrangement where there are property rights and market relations governed, to some degree of effectiveness, by the rule of law. This now describes practically all of the world, with very minor exceptions, such as North Korea (more of a weird cult-state than an alternative model).

It seems that once societies achieve a certain level of wealth and complexity, the package of private property and exchange through trade under some form of law becomes the default arrangement. It just seems to have happened, rather like, at various points in human development, town-dwelling, agriculture, romance, and the practice of science.

A good way to test whether the term describes anything useful is to consider the improbability of its absence. Despite the banners informing us that ‘Capitalism is in Crisis’, I don’t believe anyone is seriously expecting the demise of property rights and trade. Or at least no-one who’s serious is doing so.

In the modern world, the idea of capitalism as something that we could choose – a ‘model’ – was only really tenable whilst there seemed to be an alternative which could be presented as potentially viable. Most notably, this was Soviet Communism. It’s now evident that the Soviet economic experiment was a journey down a dead end.

In much the same way, various strains of utopian communism sought to abolish other things that appear fundamental to developed societies; romance and town-dwelling, for instance. We regard these efforts as rather crazy, like trying to abolish gravity.

In any event, twenty years after the collapse of capitalism’s ‘other’ I think the word’s retirement is overdue. Tidying up our language in this way is well worth doing: if we stopped using the concept we’d see the options ahead of us more clearly.

When we look at things through the prism of capitalism we end up dwelling on systemic tweaks. Fairness becomes a matter of adopting the right economic model; if we get that right we can expect the right moral outcomes. It becomes easier to abdicate moral agency and personal responsibility.

Ralf Dahrendorf in his post-Cold War Reflections on the Revolutions in Europe concluded that we need to get away from the primacy of economics, that we should stop looking for our solutions in all-encompassing systems. The important thing is for there to be an open society. This will help ensure there is the best discussion and determination of how resources should be distributed.

Protesters’ banners say futile things like: “Replace capitalism with something nicer”. They would be more meaningful if they simply read “Be nicer” (or more responsible, generous, unselfish, etc.). For instance, I don’t think we should see excessive executive pay as the ineluctable outcome of our ‘capitalist system’, an intrinsic part of the package –  it’s more the product of a failure of moral restraint, a collective greed justified with what system-thinking made permissible.

You see, there’s no system to replace and we aren’t living in a model. There’s just you, me, others and what we believe – and, through our democracy, agree – to be fair and efficient. However, it’s at this point that the really hard thinking begins…