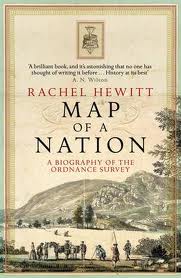 Our Dabbler Book Club choice for September is Map of a Nation – A Biography of the Ordnance Survey by Rachel Hewitt. Here’s the blurb:

‘This is a brilliant book. . . . history at its best’ A N Wilson, Reader’s Digest

‘Hewitt tackles the subject exuberantly … the book won me over’ Jan Morris, The Times

A map of the nation was first conceived while war raged in Scotland. The British troops were unable to find the Jacobites as they disappeared into the unknown Highland landscape. In what was initially a military endeavour, a quiet but determined surveyor named William Roy was commissioned to map Scotland. After Roy’s death, his dream of an Ordnance Survey map of the whole nation was finally realised.

Map of a Nation is filled with stories of the other incredible characters who funded and created the Ordnance Survey. They were frequently mistrusted by the locals and challenged by heavy and flawed equipment, but they were also inspired by the time in which they lived and the extraordinary breakthroughs that were being made in art and science. When revolution erupted in France, the coast was prioritised by the map makers so that any weak spots could be found and protected. But despite long-running battles with the French, the English mapmakers also worked with their rivals across the Channel to improve their techniques.

The excitement of the first accurate map of our nation had its detractors, including artists such as Blake and Wordsworth, didn’t want to see the magic of the landscape reduced to lines on a graph. Others, particularly in Ireland and Wales, rebelled against the standardisation of the names of local rivers, hills and other landmarks. But it was generally greeted with excitement by a nation tired of a jigsaw of inaccurate local maps.

This is the remarkable story of a group of highly intelligent men, incredible breakthroughs in scientific discovery and a philosophy that changed the way the world was seen forever.

But what will you make of it? We have 10 copies to give away to members of the Dabbler Book Club, and 2 extra copies for members of the League of Dabblers.

How to get a free copy of Map of a Nation

After that, you don’t have to do anything. All members will be automatically entered into the ballot for one of 12 free review copies, which will take place on Monday 19th September. We’ll email the winners, at which point you can opt out if you really don’t want that month’s choice and would rather another member got the chance.

We’ll be reviewing Map of a Nation next month, and you can contribute your thoughts (though you’re not obliged to.)

Ts &Cs: All entrants will automatically be entered into the Dabbler Book Club. This means that you will receive occasonal emails from us about the next monthly book and other offers. However, we will not pass your details on to any third party and you can unsubscribe at any time by emailing editorial@thedabbler.co.uk and requesting to be unsubscribed. Winners will be drawn at random from the Dabbler Book Club members at 5pm on Monday 19 September 2011. The judges’ decision is final. The Dabbler reserves the right to offer an alternative prize or to offer no prize and withdraw the competition at any time for any reason. More competitions are available at Free UK Competitions