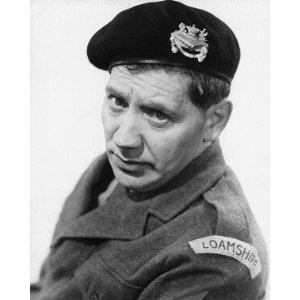 This week Mr Slang settles back into the deep leather armchair in his favourite corner of the club and raises a fourth glass of port to the famous Loamshire regiment, heroes of innumerable imaginary battles…

‘All that remains is the orderly –sergeant’s voice reading orders to the new blood in the quiet summer evening in sleepy Loamshire, with its laughing English fields and gay hedgerows spread about the lazy canal. ‘The O.C. regrets to announce the following casualty in the Expeditionary Force…’

But let us not weep. They have good wars, the Loamshires. They usually do. What d’they call them? The ‘Knock-Outs,’ and they earned that a century back. I know, the Loamshires, as they say in the canteen, ‘think no small beer of themselves,’ which is to say that they are uppish.1 But dammit, they deserve it.

Loamington, where they have the great school, sent along its OTC in ’14, but they weren’t the first of the county’s sons to see service across the Channel. The Loamshires had fought with Marlborough in Flanders.2  And in India too. Harry Wharton went to Greyfriars but his father was a  Loamshire and died on the frontier around 1900.3 Blessed useful when Harry and the boys were in Aldershot watching the Regiment play the Artillery: up jumps a gang of gypsies, starts laying about them with bludgeons. Not for long: the troopers remembered Harry’s father and a few knocks with the belt buckle had gyppo cutting his stick smartish.

And there had been tricky moments serving the Flag. A nasty standoff with the Tugrawallahs in ’17. There’d been that bother in Amritsar and now the lads were facing off a mob. Some problem with the bullets, or was it independence. Unfortunately one of the Loamshires accidentally let off his rifle. The Tugrawallahs immediately leapt to the conclusion that they were going to be shot down where they stood.4 Johnny panicked – they’re not all Gunga Dins, Mr K.  – and that was that.

No, it wasn’t all a cakewalk. Saw off the Boer5 but then there was that time in ’03, formed up in front of the Blankshires. Their men were jumpy and once, when a horse got loose and galloped across their front, thenearly fired a volley into the Loamshires in front of them.6 Our lads just laughed.

Trouble was, wasn’t it for them all, that the Hun could fight too and the Sixth form were gone and the rest of Upper School with them. The Loamshires began as decent country chaps, but had been filled up with town riffraff as the war went on – better at dogery than a square fight7. ‘Knock-outs’, perhaps, but the C.O. did not believe very much in sniping. Used to tell us that sniping will ‘never win the war.’ Not for gentlemen. Maybe so but it made the Loamshire sniping section a pitiable affair.8 Chalk up a few more for the Hun.

Of course one thing the sausage-eater didn’t have was the Bulldog. Captain Hugh Drummond, D.S.O., M.C. of the Loamshires, to you, my boy. Good god, what a fellow. Fit as a whole orchestra of fiddles, drank like a fish, laughed like a drain, and killed as to the manner born. Silent, deadly. What a fellow, never happier than whipping some Bolshie Jewboy,  dismembering a Transylvanian dwarf or going one-on-one with a hideously deformed yet strangely powerful darky. Yes: happier days.9

Trouble is, they didn’t last. You wouldn’t have known Colonel Blimp, charming to a fault. Brought out of mothballs for the second big one and what do they do? Sic some grammar school oik on him. Claims he’s a one-pipper with the Loamshires, ‘Spud’ Wilson he calls himself.10 Laughs at the old boy. At least Waugh gave us a fair crack of the whip. Loamshires all over Sword of Honour. That’s the ticket. Even if there was a bit of a cock-up in Crete.11

Of course we’re traditionalists in Loamshire. Conservatives even. Large or small C. Fighting aside, there’s one thing that counts in Loamshire, and it isn’t radicalism. Fellow called Felix Holt tried to stir things up in 1832 and where did that end: on the front page of the Courant and sent down for manslaughter. That author-chap Eliot wrote a book about it, except it turns out he was a ruddy woman.12 No, Loamshire is a sporting county, and if Loamshire cricket goes on for ever,13 and old Blenkinsop remains the Club’s most enthusiastic supporter,14 the three great festivals of its year are the Hunt Steeplechases in March, the Loamington Polo Week in August, and the Loamshire Coursing Cup in December.15 Lord Loamshire up at the big house ran a ringer in the ‘Chase in ’6016 but the local man, out of regimentals  and dressed in the Loamshire Hunt colours —scarlet coat with pea-green facings17 – carried the day. Loamshire’s got a touch of the hairy hoof himself. They do say the butler runs the place: Crichton. ‘Admirable’ they call him.18

And I’ll be frank: we don’t like a man who won’t work. There’s a good train, the Great Loamshire railway runs down to Queen’s Cross (you’ll remember the disaster of ’71?),19 but our highways are constantly infested with tramps. Off to gaol with the lot of them. And ‘tramp’ moreover has a wide meaning in Loamshire: all wandering musicians, German bandsmen, Italian organ-grinders, acrobats, stilt-walkers, conjurers, open-air performers of all kinds, have a hard time of it. The county constabulary and the warders of the local prison have to do with so many outlandish foreigneering folk that they have invented a sort of lingua franca which does with all, especially when helped with shrugs and nods, and wavings of the hand.20

But things have changed. Not for the better. There’s a technical college at Camford now: proposing to set up a course in Window Cleaning21. As for the regiment, it’s the first time since ’91 there’s no Fenwick serving with the Loamshires22

Worst of all some little popinjay just out of Oxford turned the whole place into a laughing stock. All floppy hair and nancy manners. ‘If you seek a tombstone, look about you; survey the peculiar nullity of our drama’s prevalent genre, the Loamshire play. Loamshire is a glibly codified fairy-tale world, of no more use to the student of life than a doll’s-house would be to a student of town planning.’23

Fetch me another port, will you. And my horsewhip. Wouldn’t be surprised if he enjoyed it.

7 thoughts on “The Fighting Loamshires”