Before plunging into the ocean, snorkelled and flippered or, as it may be, encased in full body diving gear, it is critically important that you are aware of the actual size of the innumerable life forms that teem within the vasty deep. If you have read Pebblehead’s bestselling paperback The Neurasthenic Aquaperson, you will appreciate the force of my argument. In this book, the author ploughs through a relentless litany of aquatic diving enthusiasts of a nervous disposition who came a-cropper in the water because they feared an encounter with some monstrous sea-being whose picture they had pored over in an album of marine life, without having taken care to read a parenthetical addendum to the caption saying (actual size) or (not to scale).

For the hearty and the reckless, of course, there is no problem. They will topple off the side of their boat and go happily splashing about in the depths with the same gusto they would take to striding across a wild and desolate moor, or tucking into breakfast in a magnificent hotel dining room. But woe betide the mentally fragile diving person, one who suffers from attacks of the vapours, should they jump into the broiling ocean unprepared!

Let us consider an example. Here is a picture of Zoanthus socialis: 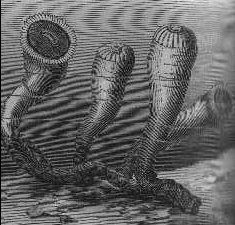 In reality, these are tiny things, greatly magnified in our reproduction, and threaten no peril to the average-sized human diver, whether hearty or neurasthenic. Yet the latter, those whose brains are given to fuming imaginings based upon anatomical inaccuracy, may have understood these wee creatures to be titanic in size. They may fear being sucked into Zoanthus socialis’ hideous maw, helpless and alone. Such timidity in the sea is desperately bad for the moral fibre.

Pebblehead acknowledges that many nerve-wracked oceanic explorers will prepare themselves by swallowing a draught of some brain tonic or emboldening potion before clambering into their wetsuits. He condemns this practice in prose of towering vigour. “There can be no substitute,” he writes, “for preceding each dive into the squalid black depths of the oceans with untold hours of study of the actual size of thousands, nay, millions of grotesque life forms that populate those very same squalid black depths into which the neurasthenic aquaperson is due to plunge!”

How right he is.

2 thoughts on “The Neurasthenic Aquaperson”