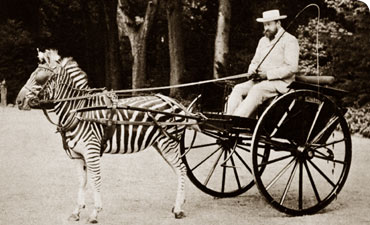 Nige finds two extraordinary collectors within the pages of that lepidopterist’s Bible, The Aurelian Legacy: British Butterflies and Their Collectors …

Like Gaul, The Aurelian Legacy is divided into three parts – a history of the British butterfly fancy, a biographical dictionary of notable butterfly men and women, and essays on some of the more historically interesting of our butterflies.

Browsing in the biographies, I found the chap with the zebra cart above – Lionel Walter Rothschild, 2nd Baron Rothschild of Tring, who sounds like a delightful fellow. Temperamentally unsuited for the normal occupations of the world, he devoted himself entirely to building up the largest collection of animals ever assembled by one man – everything from starfish to gorillas and giant tortoises (144 of them), with butterflies and moths to the number of 100,000 species, with the greatest range of variants ever seen (‘I have no duplicates,’ he declared).

As a student at Cambridge, he kept a much-loved flock of kiwis, and kangaroos, ostriches and, of course, zebras roamed free in his grounds at Tring. He once rode a zebra carriage and four through Piccadilly to Buckingham Palace. Such exhibitionism is often a product of shyness, and Rothschild was cripplingly shy. He was also apparently unable to control his voice, which alternated quite unpredictably between a low stammer and a loud bellow. He grew very stout, tipping the scales at 22 stone, his vast 6ft 3in body balanced on tiny feet, giving the effect, when he bowled around his mansion, of (in his niece Miriam’s words) ‘a grand piano on castors’. His younger brother, Charles, was also a collector (and a pioneer of nature conservation) but his main interest was in fleas, on which he became – like his daughter Miriam – a world authority.

Here’s another brief life – of a fat, genial chap, bearded and jug-eared, who is photographed reclining on one elbow in a meadow, looking more like a farm worker enjoying a break than the successful tax accountant, first-class shot and fly fisherman and eminent butterfly collector that he was. This is Robert ‘Porker’ Watson (1916-84), who began life selling rabbits, running a paper round, then a milk round, and winning wrestling prizes at fairs.

How he made the transition from milkman to tax accountant is not clear, and his love life too hints at mysteries, including as it did four marriages and a remarriage. He named the house he built ‘Porcorum’. In his butterfly collecting, he aimed for a collection of perfect specimens, and ‘his setting was described as a miracle of perfection, despite his being virtually blind in one eye’. It is a wonderful world, the world of the butterfly fanciers, and The Aurelian Legacy is an endlessly rewarding guide to it.