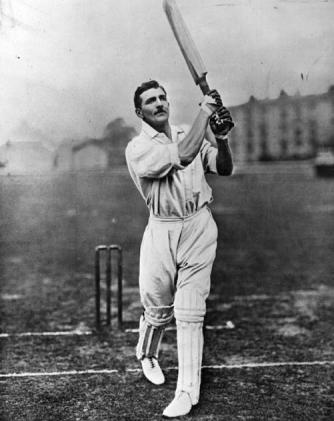 John Arlott called him ‘the most variously gifted Englishman of any age,’ and Arlott, conjuring his musty magic from an old typewriter set next a glass of something good and red, was probably right. The sheer unlikeliness of CB Fry continues to astonish, more than half a century after his death.

Had he confined himself to the cricket field, his 30,000 first class runs, made from 1892 to 1921, would still have secured his legend. On the bombshell pitches of the Victorian era, Fry averaged 50.22, a mark that today would make him a high-class player but back then, as the modern game was beginning to appear, made him a genius. Only his great friend Ranjitsinhji averaged more, and he was a Prince. England did not lose under Fry’s captaincy, and the six consecutive first class hundreds that he hit in 1901 has never been surpassed – The Don and Mike Proctor have equalled it, but it is a feat of batsmanship that has eluded everyone else from Boycott to Tendulkar.

Yet cricket was a sidebar to the rest of his life, which reads as if it was invented by Monty Python. He was a golden god long before the phrase was thought of, and in his golden youth he was known not just by his initials, which were as recognisable as WG’s, but as ‘Charles III’ (after a cartoon of him that appeared in Vanity Fair in 1894), ‘Lord Oxford’ and simply ‘Almighty’. He was physically beautiful enough to be described as ‘the handsomest man in England’ and academically gifted too – his ‘gentleman’s fourth’ in Classics from Wadham College Oxford came only after his first mental breakdown. And then there was everything else: He equalled the world long jump record, appeared in the 1902 FA Cup Final, played rugby for the Barbarians, stood as an MP, became an advisor to the League of Nations (where he may or may not have been offered the throne of Albania), launched and edited two magazines, invented the concept of the sporting star’s newspaper column, was the fifth person to appear on This Is Your Life (when his guests included Jack Hobbs and SF Barnes), taught at Charterhouse and became a captain in the navy reserve.

His party trick was to jump backwards onto a mantelpiece from a standing position.

He engaged in a bizarre marriage, probably for money, to a terrifying woman named Beatrice who was 10 years older than him and who’d had a lover called Charles Hoare since the age of 15. Mental illness shadowed his limitless gifts. He first endured it at university, but the real horrors descended later in life, when he fell in thrall to Hitler. He tried to persuade von Ribbontrop that Germany would produce ‘a blond Grace’ should the Reich take up cricket, and developed an irrational fear of Indians despite his lifelong friendship with Ranji. He dressed eccentrically, suffered paranoid episodes and was once found running naked on Brighton beach. 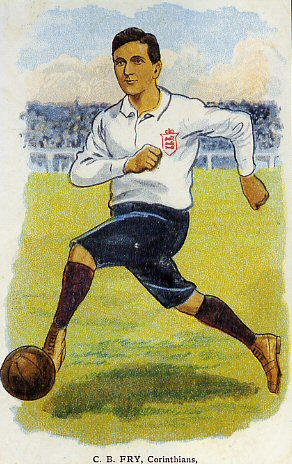 It was an epic life with a great sad sweep to it. A long time ago, my dad and I found a copy of Ranjitsinhji’s Jubilee Book Of Cricket in a junk shop. It’s a beautiful thing, one of those childhood objects that, when I pick it up, immediately transports me. It was only a few years back that I discovered that Fry probably wrote most of it. CB seems almost as distant as that book now. Life and sport have become atomised, and you just can’t do everything any more.

Fry died in Hampstead in 1956. In his obituary, Neville Cardus had these last words:

‘Fry must be counted among the most fully developed and representative Englishmen of his period; and the question arises whether, had fortune allowed him to concentrate on the things of the mind, not distracted by the lure of cricket, a lure intensified by his increasing mastery over the game, he would not have reached a high altitude in politics or critical literature. But he belonged – and it was his glory – to an age not obsessed by specialism; he was one of the last of the English tradition of the amateur, the connoisseur, and, in the most delightful sense of the word, the dilettante.’

Jon is the author of Muscle and The Years of the Locust and also has a fine cricket blog called The Old Batsman.

7 thoughts on “The sheer unlikeliness of CB Fry”