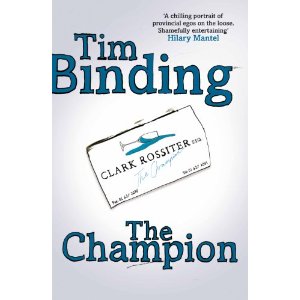 Brit: Money stinks, is the message Tim Binding first appears to want to convey in The Champion. Literally so in this passage.

I’ve come to make my money respectable, give it a bit of breeding… It gets up people’s noses. It does that anyway…Did you know that? I read a book by one of them Great Train Robbers once, how they had all the money stashed in their house, how it stank the place out. Every time they opened the door the pong hit them in the face, like they had a stiff under the floorboards.

Money stinks and so do the people who pursue it. Foremost amongst these malodourous mammon-worshippers is Clark ‘Large’ Rossiter, a vulgar, charismatic bully who comes back from the City with a wodge of cash, to rule the roost in a small, class-obsessed Kent town. Not so pleased to see him return but nonetheless powerless to escape his magnetic draw is his school contemporary Charles Pemberton, the novel’s narrator, an emotionally-constipated chartered accountant who loathes the changes being wrought on ‘his’ town even as, in his capacity as Large’s finance manager, he helps to facilitate them.

Large is a familiar personification for the supposed excesses of Thatcherism, but he is no less fun for that. The Champion is a rollicking good read, ripping along at a good pace with plenty of nasty laughs and a handful of even nastier surprises. Two financial crises, both involving reckless betting on insurance policies, cast shadows over The Champion. The first is the Lloyd’s of London ‘recruit to dilute’ scandal of the late 1980s and early 1990s, in which the elitist reinsurance market allegedly began deliberately recruiting many more investor ‘Names’ in order to spread the hit it knew (but which the new Names didn’t know) was coming from an avalanche of asbestos-related illness claims in the United States. Charles’ father is one of these suckers, and, bankrupted, he ends up hanging himself in his wife’s greenhouse – a nasty surprise indeed.

The second crisis, interestingly, occurs after the book’s end. Large has borrowed recklessly to finance a string of luxurious elderly care homes, which relies for its soaring profitability on customers paying for policies which guarantee them places long before they need them. In the light of the Southern Cross story – the real-life retirement home chain which saw years of booming success followed by collapse in the 2008 global banking crisis – we can see that Large is doomed for a financial comeuppance.

Good-oh, we might say, if we have been rooting for the narrator Charles, who spends much of the novel sharpening his hatred of Large to a fine point. But this is where The Champion gets interesting. Money stinks, and so do its worshippers… and yet so does everyone else. This is a novel almost entirely populated by baddies, from Charles’ snobbish mother to the cruel beauty Sophie. And as Thatcherite bully anti-heroes go, Large Rossiter is surprisingly sympathetic. He also has a moral compass, or at least code of sorts.

Charles, we eventually discover, is the real anti-hero of the piece: a stuffed-shirt Iago who hatches a sneaky revenge plot far more tasteless than anything Large could devise. I won’t spoil it with details, but in the end I was glad Charles didn’t get what he wanted, and the last three or four pages – which consist of an eye-wateringly nihilistic, misanthropic rant – confirmed my growing suspicion that, as in Zoe Heller’s classic of the unreliable narrator genre Notes on a Scandal, we had been looking through the eyes of the true villain all along.

Toby Ash: I would be happy to wager a decent sum that Tim Binding wrote the first draft of The Champion about 15 years ago, decided it wasn’t up to scratch and stuffed it in a drawer. It might have been best to have left it there.

The book is set in a small market town in Kent in the early 1990s, although it is not an early 1990s that is entirely recognisable. People were not buying birthday cards on the internet then and the Bluewater shopping centre didn’t open until 1999, to cite a couple of examples of the chronic chronological dizziness that plagues this book.

Anyway, meet Charles Pemberton. He’s an unremarkable man whose father was governor of the local private school and a man of local standing. Unfortunately Dad was persuaded to become a Lloyds Name in the late 1980s and was subsequently wiped out. The shame proved too much, and Pemberton senior hanged himself in the greenhouse on the day they were moving out of the family home.

Just as this middle class family faces ruin, the vulgar, wheeler dealer Clark Rossiter, the council estate boy who managed to get a place at Charles’ private school, waltzes back into town. Flashing his cash, he buys local businesses and even the Pembertons’ old house. He is also married to Sophie, the object of Charles’ teenage longings.

The whole narrative feels a bit dated. It’s a cliché of the 1980s. The old order pushed aside by the brash barrow boys who made good under Maggie. There is nothing new here, despite the blurb on the back of the book straining to make a connection between the Lloyds debacle and the current economic crisis.

We are also repeatedly told that Clark’s businesses are leveraged to the hilt, a clumsy nod to the current debt-fuelled financial crisis and designed to give the impression that Clark’s voracious business expansion is bound to end in disaster. But the story is set some 15 years before the current crisis and the descriptions of cash-rich banks and investors throwing money around are inaccurate. In the early 1990s, banks were busy recalling loans.

None of the book’s characters are likeable or fully formed enough to be particularly interesting. Charles Pemberton is just plain dull. It is hard to empathise with an accountant whose idea of a good time is to celebrate American Independence Day alone eating burgers, buying cowboy shirts and reading Time magazine (do people like this actually exist?). Come on Charles why don’t you pack your bags, leave your dull little town and actually go to America! But alas, no. Charlie (sorry, Charles) is a small town boy simmering with resentment at the vulgarian invasion, yet also happy to take the new money that comes his way.

He duly makes his stand, burning wads of the odious Clark’s cash. He also shags the lovely Sophie. But by the end I really didn’t care much who won this depressing small town turf war. Of all the characters, Clark holds the most interest. Brash and flash he may be, but he is smart, worked his way out of the council estate and at least possesses a degree of awareness of his many shortcomings, confessing he wouldn’t want his daughter going out with anyone like himself. We also discover at the end of the book that years before his mother had to sleep with the ever-so-respectable Pemberton senior to get him into Charles’ school. The final indignity for poor Charles.

I lived in the home counties during the period the book was set and could barely recognise the rapid social upheaval and tension set out in The Champion. For fictional accounts of this time, I’m happy sticking with the likes of Amis and Hollinghurst.

Audrey: This is the world of the nineteen eighties and nineties as seen by a callous Adrian Mole. The trouble is that for those of us who are Adrian Mole’s contemporaries, it was easier to sympathise with those troubles of a provincial loser. However, Charles Pemberton, the outsider of this story, doesn’t elicit that sympathy, because he never seems real enough.

The trouble with the book is that although it wants to use recent history as a peg from which to hang the story, it’s frustratingly vague about real places and real dates, with the result that nothing seems convincingly remembered. We are somewhere in Kent, some time after 1987. Real events have real consequences – like the Lloyd’s Names scandal – but the historic events aren’t anchored by any of the trivial memories that should go with them to make them real. What did these people look like? Listen to? Watch? Read? I’m not saying that the novel should become a literary version of one of those Channel 4 “100 things you remember about the Nineties” programmes – but it lacks subtlety and texture.

For example, the house where Charles grew up is a focus for many of the book’s emotions: greed, envy, despair and loss – but it’s hard to see it clearly in your mind’s eye. It has “front stairs and back stairs”, and dark panelling, and a greenhouse, but lacks the small details that would conjure it up compellingly. It’s no Howards End, even if we understand the point that these days, Howards End is probably a footballer’s mansion or a care home.

The Champion has many of the faults I associate with Martin Amis: the anti-hero, Large, is sprawling, thuggish and macho; the women are mostly just ciphers, objects of lust with no coherent minds of their own. There’s also a casual brutality towards minor characters in the service of satire. One dies, for example, in a car crash on the way back from a booze cruise to Calais on the Euroshuttle. (Was it ever even called the Euroshuttle?)

The book’s premise seems to be that nothing good has happened, at all, since 1979; but it’s not sure whether what came before was any better – the old world of pubs and croquet lawns is as corrupt and false as the new one of wine bars and swimming pools.

You can buy The Champion from Amazon here. Next month’s Dabbler Book Club book is Rupert Thomson’s acclaimed memoir This Party’s Got to Stop and we’ve got loads of copies to give away… sign up free now.

10 thoughts on “The Dabbler Book Club Review: The Champion by Tim Binding”