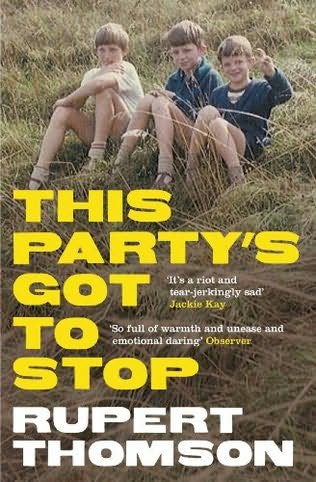 This Party’s Got to Stop by Rupert Thomson has been described as “Darkly comic, disturbing, strange and ultimately humane, a memoir that discovers love and human kindness in the most unexpected places’” by the Sunday Telegraph, and as  “A Masterpiece, in its own modest way … humanely funny, wryly anarchic, achingly poignant” by Time Out.

In his first venture into non-fiction, the celebrated novelist Rupert Thomson has produced one of the most extraordinary and unforgettable memoirs of recent years. On a warm, sunny day in July 1964, Thomson returned home from school to discover that his mother had died suddenly while playing tennis. Twenty years later, Thomson and his brothers get word that their father, who suffered chronic lung damage during the war, has died alone in hospital. In an attempt to come to terms both with their own loss and with their parents’ legacies, the three brothers move back into their father’s house. The time they spend in this decadent, anarchic commune leads to a rift between Thomson and his youngest brother, a rift that will not be addressed for more than two decades. “This Party’s Got to Stop” works Thomson’s memories into a powerful mosaic that reveals the fragility of family life in graphic and often heartbreaking detail. It is both a love letter to a lost brother and a chronicle of the murderousness and longing that can characterize blood relationships.

That’s the blurb anyway. What will you make of it? We’ve chosen it as our Book Club selection for June, and thanks to our friends at Granta, we’ve got 12 free copies to give away!

After that, you don’t have to do anything. All members will  be automatically entered into the ballot for one of 10 free review copies, which will take place on Wednesday 8 June. We’ll email the winners, at which point you can opt out if you really don’t want that month’s choice and would rather another member got the chance.

See more information about the Dabbler Book Club here. We also have two extra copies set aside exclusively for members of the League of Dabblers, so they will have a greater chance of winning.

We’ll be reviewing This Party’s Got to Stop next month, and you can contribute your thoughts (though you’re not obliged to).

Coming soon – reviews, prize draws, signed copies, exclusive previews and more
Over the coming months we’ve got some great literary giveaways exclusively for the Dabbler Book Club, including signed copies and much more.

Our review of May’s book choice, The Champion by Tim Binding, will appear on the Dabbler next week.

Ts &Cs: All entrants will automatically be entered into the Dabbler Book Club. This means that you will receive occasonal emails from us about the next monthly book and other offers. However, we will not pass your details on to any third party and you can unsubscribe at any time by emailing editorial@thedabbler.co.uk and requesting to be unsubscribed. Winners will be drawn at random from the Dabbler Book Club members at 5pm on Wednesday 8 June 2011. The judges’ decision is final. The Dabbler reserves the right to offer an alternative prize or to offer no prize and withdraw the competition at any time for any reason. More competitions are available at Free UK Competitions