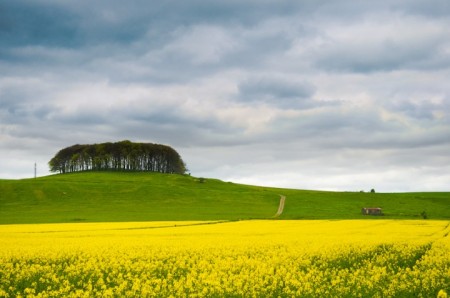 The unsettled weather of the last few days – the British weatherman’s ‘sunny spells’ interspersed with the same’s ‘thundery showers’ – brings to mind a poem by Louis MacNeice, June Thunder. It was published in 1938, and it’s difficult to read it now without thinking of it as pre-war, a foreshadowing of larger storms. It is, though, sufficient in itself, even if I do think it’s more convincing as an ebulliently Romantic description of an atmosphere than as a frame for romantic yearning.

It has startlingly vivid imagery, as well as a slight awkwardness, what with its rather clotted, alliterative rhythms and the ungainly words that occasionally hold you up. But that seems to me just right for evoking those strangely beautiful moments when sunshine and dark clouds heighten colour and sound, and the world seems to hold its breath.

The Junes were free and full, driving through tiny
Roads, the mudguards brushing the cowparsley,
Through fields of mustard and under boldly embattled
Mays and chestnuts

Now returned but I note as more appropriate
To the maturer mood impending thunder
With an indigo sky and the garden hushed except for
The treetops moving.

Then the curtains in my room blow suddenly inward,
The shrubbery rustles, birds fly heavily homeward,
The white flowers fade to nothing on the trees and rain comes
Down like a dropscene.

Now there comes catharsis, the cleansing downpour
Breaking the blossoms of our overdated fancies
Our old sentimentality and whimsicality
Loves of the morning.

Blackness at half-past eight, the night’s precursor,
Clouds like falling masonry and lightning’s lavish
Annunciation, the sword of the mad archangel
Flashed from the scabbard.

If only you would come and dare the crystal
Rampart of the rain and the bottomless moat of thunder,
If only now you would come I should be happy
Now if now only.