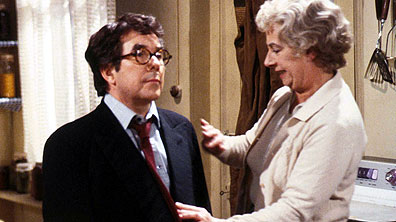 Given slang’s track record, it is to be assumed that no one will expect that mother, that sacred, venerated figure in much of the wider world, receives any favours from the lexis. While slang observes man’s time-honoured division of women into whores and mothers, the difference here is that the latter, while acknowledged as abjuring a hands-on role in the game are often to be found running it as procuresses, bawds and madames. Then of course we encounter the oedipal polysyllable and all its prolific quasi-euphemisms.  Indeed, since I do not wish to dwell, let us offer some now: mother-for-you, mother hubbard, muddy funster, Mister Franklin, molly-dodging, mother-loving, motorcycle and triple-clutcher. There are dozens of others. We may pass them by. The inventfulness is not, pace Frank Richards, terrific.

Mother herself fares a little better, but her first, mid-16th century appearance remains at the brothel door. Sometimes she takes on a greater specificity. For instance there is  Mother Cunny,  Mother Knab-cony (i.e. ‘Mother Snatch-Sucker’),  Mother Midnight, covering those who pursued a sideline as an abortionist and Mother Damnable who, while usually generic can be found in Caulfield’s Blackguardiana (1793) in a portrait entitled ‘Mother Damnable of Kentish Town Anno 1676’ with an accompanying verse which notes that ‘So fam’d, both far and near, is the renown, / Of Mother Damnable, of Kentish Town’. (Mother Goddam was, however, the late Bette Davis). She can also be the mother of the maids who in standard English is governess to the Queen’s maids of honour.

The result, at least c. 1600, of visits to such mothers might well be a follow-up sojourn in Mother Cornelius’ tub: the sweating tub used in the cure of venereal disease. The term is assumed to memorialise a real-life Mother Cornelius, whether a nurse or a procuress; but John ‘The Water Poet’ Taylor’s Travels to Bohemia (1620) has ‘Or had Cornelius but this tub, to drench / His clients that had practis’d too much French’ (i.e. venereal disease rather than oral sex). Here the reference is possibly to the physician Henry Cornelius Agrippa (1496–1535) a leading advocate of hot baths for medicinal purposes. It has also been suggested that far from eponymous, the term reflects the use of a hard dense wood, known as cornel-wood, necessary to withstand the heavy salt brine used in ‘pickling’ patients. Finally, inevitably, are the puns: on the ‘cornuted’ cuckold or Latin cornu, a horn, the source of one’s current incapacity.

Mother can also mean a pub landlady, thus the generic Mother Bunch, originally a noted late-16th century ale-wife. Back with sex, but in solitary, is Mother Fist, blessed with her five industrious daughters. The unadorned word can also mean one’s wife; the self-proclaimed name of a female owner of a pet, especially a dog (‘Come to mother, baby!’) and as the senior member of a pimp’s stable of whores. It also be used as a female self-reference, a style that is extended to camp gaiety (‘Your mother…’),, wherein one also finds Mother Ga-ga, a gossipy older homosexual and Mother Parker, who is older too, but tough.

Mother has her little specialities. There is mother’s cramp, a hernia; mother’s life,  imprisonment for life; mother’s day, a US black term for the day when welfare cheques arrive from the government (the US military use it for payday). There is mother’s friend, a quinine pessary and an elementary form of contraceptive, the inefficiency of which gave it a parallel name, the midwife’s friend. Still medical are mother’s nature, menstruation (or marijuana) and mother’s blessing, laudanum (as used for fractious mother’s darlings). Mother’s milk can be either brandy or gin, as is mother’s ruin which ought to be earlier but appears to date only from the 1920s. Alternatively there is blasphemy: the mothers, respectively  of all saints, of all souls, of St Patrick and of St Paul have all denoted the vagina. So too has the mother of all masons though there seems no discernible reason for such singling out. Nor is mother always flesh and blood. The mother of… is used of the ultimate example or extreme version of something and enjoyed a 1990s flourishing  after the hyperbolic use of ‘the mother of all battles’ by the Iraqi dictator Saddam Hussein (1937–2006) to describe what his antagonists termed Operation Desert Storm.

The mid-19th century was big on catchphrases. Mother gets her share. There was does your mother know you’re out? a sarcastic comment aimed at one whom the speaker feels should be elsewhere, whether due to immaturity, foolishness or  inexperience. Contemporary was the gnomic has your mother sold her mangle? (sometimes extended by ‘and bought a piano’)? This remains pretty much incomprehensible, but was available to be cried at any passer-by. (Fans of Paul Whitehouse will recall his cod music hall comic character ‘Arthur Atkins’ and his catchphrase ‘Where’s me washboard?’.) More recent is how’s your mother off for dripping? The obscene possibilities cannot be denied, but we are more likely in mother’s traditional domain, the kitchen.

Unknown in the UK, but long-established in the US black community is the mama’s game, otherwise known as the dozens or snagging. This is a ritual game of testing a rival’s emotional strength by insulting his various relatives, especially his mother, thus mama’s game, in twelve ‘rounds’ of attack; one then takes similar insults – usually sexual and/or scatological – in return. The game can be ‘dirty’ or ‘clean’, depending on the level of obscenity involved. To play the game is to play in the family, put in the dozen, shoot the dozens and slip in the twelves. This idea of ‘dozens’ may be linked to 12, a guaranteed losing throw in craps dice, or as suggested by folklorist Gershon Legman, ‘possibly from the Saxon word “doze”, to stun or overwhelm, as in bulldozer’. It may also have a simpler folk origin: the practise of reciting a set of ritualized verses, usually in rhymed couplets, which ran through twelve specific sexual acts, each rhyming with the numbers one to twelve. (This has vanished though remnants can perhaps be seen in various drinking songs). The mama’s game is at least one root of the competitive side of rap lyrics while the modern phrase ‘Your mother!’ or in the UK, which has borrowed and modified it, ‘Your mum!’ is a two-word abbreviation of the ritual.

The UK, of course, has its own rhyme scheme.  Mother’s joy gives a boy and mother’s pride a bride. Mother Kelly is jelly, when it’s not the telly. My mother’s away means  the other day. Finger and thumb is mum (as well as dumb), while one or the other is mother. So too, and I speak as the most apostate of God forbids, is God love her.

8 thoughts on “Matrilineality – Slang and Mothers”