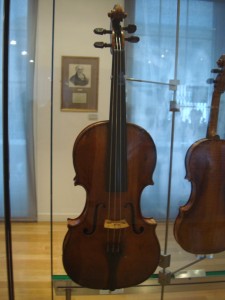 On a recent tour of the Royal Academy of Music Museum, the violin was described by Peter Sheppard Skaerved as “the epitome of understatement in working with wood.” A lapsed violinist, I’d never really contemplated the design of my instrument – just its sound. Suddenly, thanks to Peter, the skillfully turned scroll, even the tuning pegs, became worthy of my admiration…

The violin is an object of noble beauty: Anthropomorphic in shape, its various features are named after parts of the body – the neck, the belly, the shoulders… All violins are exquisitely decorated with purfling and marquetry. And even the oldest and most worn of bows are embellished with tortoiseshell, mother of pearl, gold, or protective whale bone. 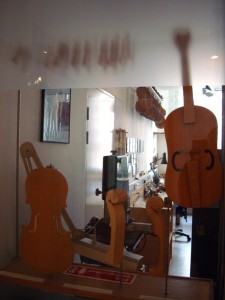 Another thing I discovered is that stringed instrument makers are called Luthiers. The Luthiers at the Royal Academy of Music are responsible for maintaining the college’s collection and acquiring additional instruments. And what a collection it is. There’s an early example of a ‘grand Amati’, a model adopted as the ideal by later generations of violin makers. The most famous violin maker of all, Antonio Stradivari, who may have worked for Amati, developed new designs. Stradivari was most famous for his ‘golden period’, when the craftsman was in his seventies and at the height of his powers. There are several examples of Stradivarius violins at the museum, including some with the famous golden varnish – the Viotti ex-Bruce violin (1709) and the Maurin violin (1718). 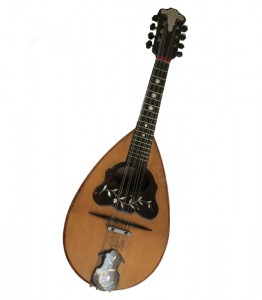 The allure of the seductively shaped mandolin is even greater than that of the violin. I was totally charmed when I purchased one recently at auction.  The strings are tuned to the same notes as the violin, so it’s relatively easy for a violinist to master this instrument.

Curiously, the painful sounding first attempts at playing my much cherished acquisition, made in Napoli in 1890, reminded me of Paganini – who brought aspects of guitar playing to the violin. He apparently kept one nail on the fourth finger of his left hand long, so he could use it to slice through the strings. He broke three, and completed his concerts on just one string. 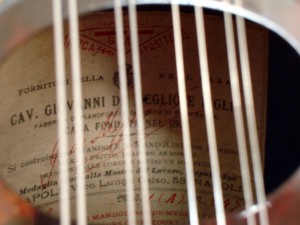 Another instrument I rather fancy trying out is the air piano.

Since the late 1960s, most experimental musical instruments have incorporated electric or electronic components. However, few classical musicians believe that electronic instruments will ever replace acoustic ones. In 1997, Patrick Ozzard-Low’s Alternative Tuning Projects undertook a pilot feasibility study funded by the Arts Council to establish a Centre in the UK for new acoustic musical instruments. When this project came to and end, Ozzard-Low decided to concentrate on his career as a composer – though in a 2008 book, New Instruments for New Music, he considers an innovative selection of hybrid acoustic-electronic instruments. These include the Virtuoso Violin (1998) – perfomed from a MIDI keyboard or sequencer to produce an acoustic sound without strings, which can be purchased for a highly charged $21,995; guitars with interchangeable fretwork by the likes of Didier Aschour (also in the 1990s) – and the horseshoe shaped Unicorn NanoPiano, (due out in 2013). 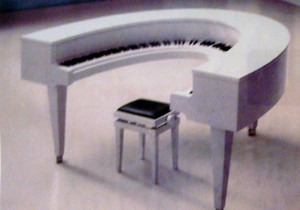 Although technology has changed design dramatically since the 1960s, the manufacture of traditional acoustic instruments still goes on in specialist workshops the world over. And there are also dabblers, like Stan Hershonik (below), who enjoy producing cutting edge musical instruments in their spare time, including some that even play themselves. “It’s such a cool hobby,” he says. Just take a look at his designs: pure joy.