In the final extract from our serialisation of Blogmanship (available to buy here), Noseybonk looks at some special cases, including the most Blogmanlike positions to take on every topic, and women and blogging…

The blogman owner of the blog on which debate occurs must know something of the sufferings of Tantalus. He has, seemingly within his reach, the ability to silence all opponents, yet by doing so he would automatically go ‘one-down’.

For example, the host cannot:

However, even with these devices out of the question, the blogman host does have certain unique privileges, and he is wise to take full advantage. Here are just three:

1)    Aloofhostship – This sustained form of abovethefray play is only available to the blog host. Skilled use of infrequency of reply to regular commenters, condescension-scattering and single, catch-all replies to multiple commenters who all made quite different points are the tools of the aloofhostman.

2)    Forgetmanship – A subploy of aloofhostship, much profit can be made from forgetting which of your many, many commenters said what. “Was it you who told me about x?” and “I think it was one of the Davids who used to harass me about that” are both sound ploys.

3)    Carry-on-regardless play – This losemanship ploy is a privilege of the host, simple but immensely effective. When a commenter corrects you on a point of ‘fact’ or points out an inconsistency in your arguing, instead of responding in the comment thread, the blogman writes another post making exactly the same point as if the accusation isn’t even worth addressing. (TIP: The effect can be intensified by making short replies to other commenters.) 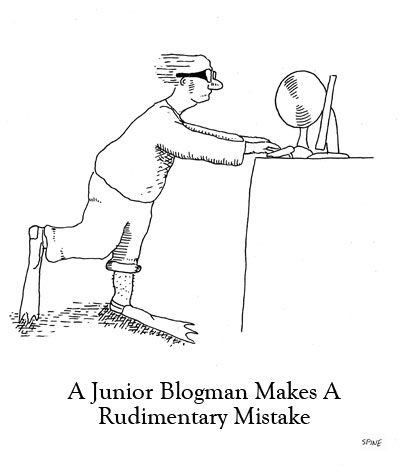 Although the skilled blogman can take literally any position in a debate and, with the parry and thrust of flatteryplay or bookrecommendship, reasonably expect to emerge victorious, the following starting positions in the principal areas of online controversy are considered by the National Society of Blogmen to be particularly suited to the blogman’s craft.

God versus atheism
Plague-on-both-houseplay is the touchstone, but the Blogman should show increasing degrees of contempt for ‘I believe in some sort of lifeforce’; weak atheism; Bible literalism; and strong Dawkinsism in that order.

Climate change
Bet-hedging is advised, but gentle barbs should be made at sceptics, and strong ones at earnest believers. Never pass up an opportunity to note that “Weather is not the same thing as climate”, nor that “It used to be global warming, but is now just climate change. Funny that.”

Nb, if taking a strong denial tack, a useful pre-empting anti-counter ploy is to say, early, “In a minute some earnest young fellow is going to come along and tell us that weather is not the same thing as climate.”

Capital punishment
Be against, but for hard-nosed reasons. Fair’sfairmanship will allow you to attack both bleeding hearts and hangers-and-floggers for precisely similar reasons.

Legalising drugs
Be for, but for anti-libertarian reasons. Make frequent but non-obvious references to Prohibition-era America and Al Capone.

Gay marriage
Again, be for but take care to criticise not praise Elton John.

American politics
Abovethefraymanship is the only possible option here, shading strongly into wouldn’ttouchwithabargepolemanship

Although arguing-for-arguing’s-sake on the internet is a heavily male-dominated activity, the determined female blogman can make use of most of the techniques in this guide*.

Furthermore, the ladyblogman has the following additional ploys at her disposal:

A) abovethefraywomanship – “You boys and your little games” is an immensely annoying Stopper, but should not be over-used or it will be vulnerable to never-mind-dear plays.

B) mothership – “You might have a different perspective if you’d given birth to children” (condescensionplay), and “Two words: labour pains” (nonsequiturwomanship) are effectively unanswerable.

C) hurtfeelingship – The I just don’t see why it has to get so nasty gambit is simply not available to the male blogman.

A note on women’s blogs
Official study of women’s blogs – the recipes, cats and books kind – is still in its infancy, but knowledgeable commenters including Eleanor Dove-Grey have convincingly argued that the ‘friendly’ gambits commonly in use on such ‘domestic’ websites are in fact far more advanced, nuanced and, indeed, vicious than those of ordinary Blogmanship.

*with the exception of logicship but the special inclusion of moral indignationship.