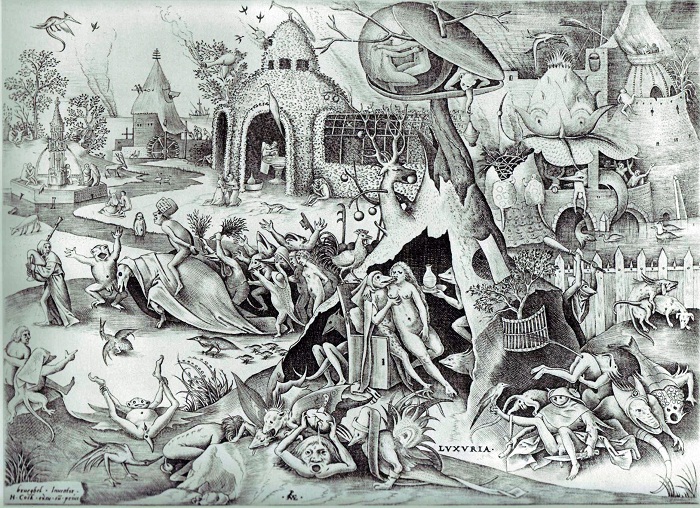 Jonathon Green – visit his website here – is the English language’s leading lexicographer of slang. His Green’s Dictionary of Slang is quite simply the most comprehensive and authorative work on slang ever published. Today Jonathon concludes his epic survey of the Seven Deadly Sins of Slang with a lascivious look at Lust…

Lust. The bad boy. All the way back through a procession of Teutonic tongues to its Sanskrit roots. Pleasure, delight, desire, relish. Until the Church stepped in and the sensual turned sinful, pleasure meant libidinous and delight was yoked with sexuality. Last was out and its animal passions turned into sin. Lusts of the flesh, a concept implying, underlines the OED, intense moral reprobation. There have been some jolly synonyms: golehead, from gole meaning merry, wanton, lascivious, lustful and the equivalent of German’s geilheit; gigletry, from giglet, a wanton girl; ustion, from Latin ūrĕre to burn (that burning that Augustine suggested should be sublimated in marriage), and epithymy, from Greek ἐπιθυμία, desire. Too jolly: they haven’t lasted. Lust has.

But we have a problem. or I do. Lust, I had thought, would round off our sins very nicely. The naughty one. Nudge nudge, wink wink. Know what I mean and say plenty more. And my problem? Simply, and fittingly: excess.  Slang, taken in its massy whole, is an epitome of lust. The love that definitely dares speak not merely one name, but spits out a myriad.

To return to what should now be a proved trope: slang reifies. Preferring practise to theory slang opts for the concrete. Lust as a concept scores low; lust in action dominates the horizon. Looking at the various categories of word that might be recruited to sexual desire and its achievement (or indeed frustration or sublimation), one finds nearly 10,000. Taking the objects of one’s lusts (male, female; enthusiastic, acquiescent, unaroused; voluntary, paid) , its achievement (seduction, intercourse of whatever orientation), its sublimation (masturbation, frustration),  the bodily parts that it sets in motion (generally but far from unrestrictedly genital), the environments of its attainment (horizontal, vertical; bed, brothel, boskage), its possible pitfalls (impotence, disease), one is overwhelmed.

Thus lust as desire, the b.u. (biological urge) as they once said on US campuses, is as often associated with the body as the brain. It is the lech, back-formed from lechery, itself from old French lechier to live in debauchery or gluttony and linked to modern French lêcher to lick. Thus one may letch about, feel letchy, and lechwater was once semen or vaginal fluid and a letching piece a sexually active woman. It is a yen, which began life in the context of opium and supposedly originated in the Beijing dialect yen, smoke, though it may well be reinforced by SE yearn.

It is much to do with heat. The fiery humour of yellow bile. One is quite simply hot. And has the hots. He has hot nuts, hot rocks or a hot-on. She is (and perhaps has) a hot tongue, but more usually has hot pants (or hot drawers or the coyly euphemised warm britches). She’s hot-arsed, –backed, –bummed, and –tailed. Ennobled as Lady Hot-bot, she’s hot to trot. He can be a hot stick, she a hot pot. She can also be mustard, notwithstanding the adjuration in Slang, Phrase & Idiom (1931) ‘It must never be used of the female sex’. They can be stoked (on), torch (for) and catch vapors. They can also be bothered up, fiending on, freakish and, though long abandoned, bouncing or chopping. She and only she can be begging for it. Men who beg for it are not lusty, merely abject.

We cannot avoid the body. What she cannot have, but he does, are swollen balls. (Which in their state of lust supposedly turn blue). He was once proud, reflecting on his physical excitement and defined by the 17th century lexicographer B.E. as ‘desirous of Copulation’. The term has also been used of a bitch (the canine variety) that is on heat. Blinded by desire he is led by (the head of) his dick and the stereotypically phallic nose gives African America’s have one’s nose open and thence a nose job, which here stands not for cosmetic enhancement but the lust itself. To have an aching or longing tooth represents the same emotion; the organ itself has a toothache. Finally there is the hard-on, usually physical, but in this context all in the mind.

The eyes also have it. To offer a lustful glance is to sweeteye, to give the eye (one can also get it) and coarsely to eyefuck, though that can as often be as challenging as it is concupiscent. One who is hairy is desirable and to feel hairy is to feel sexually inclined. The word comes from hair, first pubic then mentonymized into the entire woman.  (Glasgow’s hairy, for a working-class woman, has other origins; the presumed one being that such a woman lacked the money to buy a once near-mandatory hat). Back, of a woman means sexuality. Thus the male observation, I’d knock the back out of that!

Lust is an animal passion: we must have animals. The ram, who is rammish and evolves into an old ram who can in turn be a goat, goatish and similarly old. There is the verb horse, to lust after which conjures up a horse straining at its bit, although the word is also dialect for a mare in heat. Mad as March hare usually suggests insanity; it can also refer to lust; like the rabbit, the hare is seen as a ‘sexy’ beast, thus a hare was once a whore, and a hare-finder a womanizer. To have sparrows and goats in one’s eyes is to be casting lustful glances. The term evokes the belief among classical and some later writers that sparrows had sex up to seven times every hour (which also accounted for their short lives). Thus the Cockney cliché ‘cock-sparrow’, recorded as a term of address since the 17th century, was originally hinting at the state of the addressee’s sex-life.

So there we are. Slang’s Seven Deadly Sins. Wasn’t so bad, surely. And Easter’s on the way. Enough with penance. Go now, and sin some more.