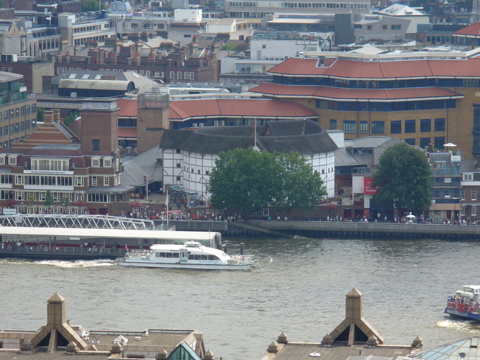 A recent rainy half-term morning found us at Shakespeare’s Globe Theatre — or rather, Sam Wanamaker’s hard-won rebuilding of the theatre Shakespeare knew, which burned to the ground in 1613 — on the south bank of a very low-running, misty Thames.

Expectations, admittedly, ran equally low. Things Thespian so often get on my nerves — semi-entertaining dissimulation dressed up as sacred revelation, Harold Pinter, the delusional self-regard, the stale old hatred of Mrs Thatcher, ‘brave’ productions, Arthur Miller, that weirdly besotted catch that blights Andrew Marr’s voice when called upon to chat with ‘actors’ about their ‘craft’ — that I was braced to do some acting of my own, simulating enthusiasm for the benefit of our local six-year old who has recently become fixated on Shakespeare’s history plays.

But here’s the plot twist: the Globe is a delight.

Not least, while the theatre itself — in the sense of the physical structure — shocks with the enchanting paradox of a ‘new’ Tudor building, its massive oak timbers weathering from tawny-brown to silver practically in front of our eyes, it also pleases with the modest, human proportions so natural to early renaissance architecture. Having expected some rough-and-ready wooden mock-up, I was absolutely unprepared both for the elegance of the stage — those enormous Corinthian columns, all that gold paint and faux-marble, the signs of the Zodiac circumnavigating the coffered ceiling of ‘Heaven’ — and unprepared, too, for the admirable purist zealotry which insisted on holding together a present-day, working building with hand-hewn wooden pegs.

Then there’s the permanent exhibition. It’s not unusual for cultural attractions, generally housed in an expensive set-piece ‘iconic’ building parachuted down into areas notably in need of regeneration, to stage exhibitions that are strong in ‘relevance’, ‘access’ and enormous refulgent touch-screens, yet lacking any collection of actual objects, focus or indeed purpose. In my initial mood of pessimism, this is what I expected of the Globe.

Again, though, in the most delightful way possible, I was proved wrong. True, some of what is on show — excavated skulls of bear-baiting mastiffs, blackened hazelnut-shells upon which genuine seventeenth century theatre-goers actually trod — has been borrowed from the Museum of London or elsewhere. And much of what is on show is a mock-up or modern replica. But at the same time, it’s all to a purpose — and it works. My companion and I — which is to say, a six-year old schoolboy and the possessor of an only slightly dusty doctorate in history (specifically, English reformation era history) from one of East Anglia’s better-known universities — both emerged having learned quite a lot about the theatre, Southwark and life more generally in Shakespeare’s day. We were thoroughly entertained, too.

It helps that the exhibition space is extremely well-conceived. It requires an act of some imagination to realise that the very functional and attractive arrangement of demonstration area and gallery occupies what might otherwise have looked very much like an underground carpark. But it also helps that a lot of imaginative enthusiasm has gone into the Globe Theatre project more generally.

The story of how one man’s slightly quixotic idea became a concrete — or indeed oak-timber-plaster-and-grease-paint — reality is an inspiring one, to put it mildly. Further, the enthusiasm of the staff is astonishing. From the lady who sold us tickets, to the tour guide, to the man who sold us sandwiches and coffee, to the specialists demonstrating Shakespearian theatrical costumes or sword fighting (of which, more soon), not a single one seemed anything other than totally thrilled by what they were doing. For a high-footfall London tourist venue, in the thick of school half-term holidays, this is by no means an inevitable outcome.

That the Globe Theatre was brought to life in the teeth of opposition from the local council, Health & Safety officers and planners, all apparently without a single penny of government funding, speaks volumes. All those plangently wailing ‘save our library!’, ‘save our forest!’, ‘save the outward and visible signs of our jealously-guarded middle class status without expecting us to do anything other than whine at the government about it!’ types out there really ought to take note — although I don’t expect for a moment that any of them actually will.

And then, finally, there was the sword-fighting. Now, as a mother, I understand the logic of laying on a bit of term-time sword-fighting wherever possible. There is something about the clank-clank-crash of steel that exerts a natural pull on the human psyche. It’s not in our nature to ignore potential bloodshed taking place nearby, no matter how tame or lamely-simulated. Few cultural attractions fail to benefit from the clash of arms, especially when there are six-year old boys about.

But again, the demonstration sword-fighting at the Globe Theatre this week was something else.

The first hint that it wasn’t the standard-issue version came with the sound itself, echoing around the gallery of the exhibition space. This was the crash of steel on steel — literalsteel. Closer examination revealed that the young men who were doing the fighting were in fact weilding proper, forged-steel, sharp-tipped Elizabethan-type weapons. What’s more, although they were doing this with notable energy and conviction, they weren’t wearing any kind of protective clothing. Not that this held them back. Indeed, at one point the action actually spilled out beyond the roped-off safety cordon, to within a few inches of where we sat. My son was charmed. Actually, so was I. As for the actors, they are apologetic — but hardly able to speak, so completely out of breath were they from what they had been doing.

In the course of testing out the weapons ourselves, we got into conversation with an older man who had been standing next to us. Will it lower the tone of this narrative irreparably if I write that he bore a distinct resemblance to Obi-Wan Kenobi from Star Wars — white hair, ambience of transcendent knowledge, Alec Guinness diction and all?

In any event, it turned out that he had made the weapons himself, having got fed up with productions elsewhere in which Shakespearian sword-fights were carried out with a random assortment of present-day fencing foils, nineenth century military swords and fancy-dress accessories — anything, in fact, except the sort of weapons that Shakespeare himself would have known. This was fascinating, obviously, in a geekish, re-enactorish sort of way. As the older man told us about it, the young men who had been doing the fighting gathered round, leaning on their swords, still breathless, listening — for all the world like trainee Jedi knights listening to their master.

We all listened. It turned out that much of the information about the weapons — their nature, weight and use — had come directly from Shakespeare himself. This was not so much as matter of literal naming or description, as from something far more magical. Pausing and looking into space for the words, this older man began to recite some relevant passages from various Shakespearian plays. We saw immediately what he meant. There were lines where one could hear the full unweildy weight of a heavy two-handed broadsword — others where the actual sound of the words themselves jabbed or slashed like a rapier.

Listening with a purpose like this, to lines produced with such apparent sponteneity from a person who had clearly internalised them as part of his innermost being, was really an astonishing experience. The young fighters, drenched in sweat and still breathing heavily, were spellbound. So was I. This was a new way of hearing Shakespeare — new for me, at least — an instinctive and active form of listening, which somehow collapsed the distance, the alienating air of falseness and pretense, that sometimes spoils stage performances for me. The lines really did — the weary old cliché can no longer be avoided — come alive. And as for my six year old son, he was spellbound too — how could he not be?

In short — and despite the fact I have not yet seen an actual production there — I find it hard to imagine that Sam Wanamaker can have wished much more for Shakespeare’s reanimated Globe Theate than experiences like this one. 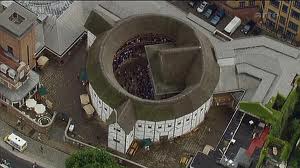 13 thoughts on “On Shakespeare’s Globe Theatre”