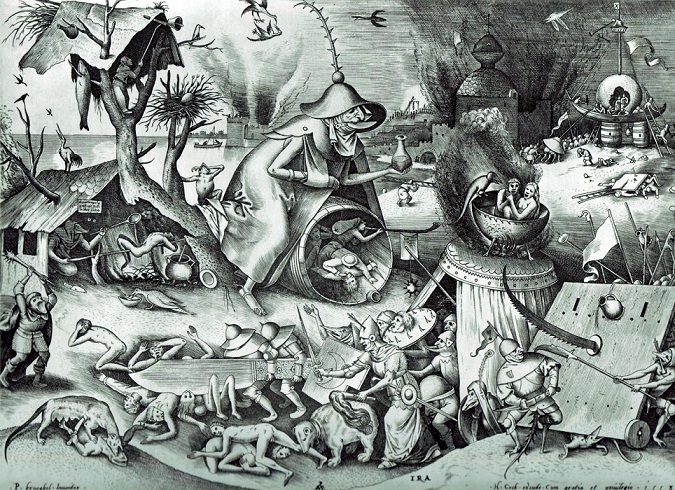 Jonathon Green – visit his website here – is the English language’s leading lexicographer of slang. His Green’s Dictionary of Slang is quite simply the most comprehensive and authorative work on slang ever published. Today Jonathon continues his epic survey of the Seven Deadly Sins of Slang by getting mad, with Wrath…

And the angel thrust in his sickle into the earth, and gathered the vine of the earth, and cast it into the great winepress of the wrath of God. And the winepress was trodden without the city, and blood came out of the winepress, even unto the horse bridles, by the space of a thousand and six hundred furlongs.
Revelations 14:19-20 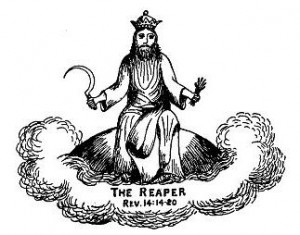 Oh yes, that old-time religion. They may not love you, but who needs love when you’ve got Armageddon? Smitings, lightnings, tramplings, terrible swift swords. What self-respecting deity ever did meek and mild? The Son may turn the other cheek, Father is more hands-on. Wrath starts off Teutonic and is linked to a variety of roots, meaning angry, cruel and twisted, and thus connects to writhe, which adds some serpentine imagery for good measure. The ‘a’ began short, as it remained in Hollywood epics where God, often as enunciated by Mr Heston, is also ‘Gahd’ , but the UK has opted for an o, ‘roth’ or even, classily, ‘rorth’.

But what the OED defines as ‘righteous indignation on the part of the Deity’ becomes quite unrighteous in human heads and hands. A form of lèse-majesté. A sin. It becomes anger. And anger, according to St Basil, is a form of reprehensible temporary madness. Losing it, as the slang would say. Loss – of control, of temper, of emotion, of stability – is as the heart of slang’s take on wrath. Images of explosion. For a lexis that tends to eschew the abstract, anger gets serious attention. A by-product, or perhaps a precursor of aggression, which is always popular with the counter-language.

One may lose one’s bean, one’s bap, one’s lunch or one’s stopper. Explosively, one blows up. As in blow one’s top, topper or cool. Since one can bust one’s boiler (and indeed a blood-vessel or gut) one can also blow off, let off or shoot steam, blow one’s stack, jets, gasket or gauge (preceded by getting one’s gauge up), most of which suggest a more melodramatic era of railway travel. Like the engines, one is bent out of shape. One can blow one’s roof, go up in the air, go to the moon, hit the ceiling or roof and climb or go up the walls. All of which leaves one atop of the house or possibly up in the boughs. After blow comes flip: one’s bean, one’s bananas, one’s lid, one’s cookies and one’s cork.

If not the metaphorical boiler, there is the imagistic head. The cap can be snapped, busted or popped; the gourd can be flipped as can be the wig or top (and a fliptop is a madman). One can be off one’s block and hot in the biscuit. One can do or go off one’s melon, chuck, crack or do a mental, do a loony, go off one’s pannikin (a small container that doubles for the skull) and get one’s dandruff up, which combines a corruption of get one’s dander up and the image of flecks of dandruff rising as one gesticulates with rage. Presumably a more extreme form is get one’s hair off or get one’s wool off, though this latter, being Australian, may apply to the more irascible breeds of sheep.

Meanwhile, an errant garment. Coined in the early 1960s and still popular is get one’s knickers in a twist. Which twist can also be applied to panties, frillies, Tampax, turban, balls, tits and prosaically underwear. The twist can also be a bunch or a wad, and a further uncomfortable option is up your crack. The nuts are also subject to twisting, and indeed knotting, and the face, guts and nose can all be in a knot too. Nor is the underwear or its contents the only symbol of rage. The disarrangement of one’s clothes that may follow a fit of arm-brandishing fury brings in get one’s shirt out (one can thus, transtively, get someone else’s shirt out, reducing them to rage) and it this phrase that gives the better-known shirty. To get one’s rag out or up is synonymous, and leads to lose one’s rag. To lose one’s vest takes us back to underwear, while infants, real or imitative  jump out of their pram. They may also, like the unlamented teppischfresser, Herr Hitler, chew the carpet or simply do a chewy.

There are a number of similes. Mad, in sense of furious rather than insane, gives Ausralia’s mad as a cut snake while American regionalisms include mad as (old Dan) Tucker, mad as hops, as a hornet, a wet hen, a maggot and madder’n snakes in hayin’. Why such entities embody fury is debatable, but they do, as do seven boiled owls and nine hundred dollars. Not to mention a woodheap, and a meat axe, which can also be both savage and wild. In all cases the object in question is like a cock-maggot in a sinkhole. Sore synonymises mad, and offers a range of puns: sore as a boil, a boiled owl, a gum boil, a pup, as sox, and sorer than a mashed thumb. Hot provides more: hot as a (two– or three-dollar or ten-cent) pistol, hot as a bad girl’s dream, as July jam, and naturally as mustard.

Last, and possibly least, a nasty little list of racist stereotyping. The black person as psychotic is a well embedded trope: thus we find a variety of nouns such as African, color, guinea (as in the Guinea Coast) and inevitably nigger. In all cases one can get one’s – up, in other words lose one’s temper. That this can also be applied to one’s Irish or one’s Italian, and that Scottish has been defined as irritable and easily annoyed (caused perhaps by the 17th century Scottish fleas: syphilis?) does not mitigate. At least zorba’d has a certain complexity: Zorba the Greeked = leaked = synonym for pissed = pissed off. One always gets there in the end.