Following his look at Edwardian football hooligans, James Hamilton continues his latest Row Z series on the reality of vintage soccer by turning to the violence and bad behaviour on the pitch…

Two things get in the way of many otherwise decent attempts to write football history. Cloying nostalgia, that polyfillas the writer’s ideal of a working class society all over the past until all the messy lumps and cracks are gone. And the insistence that everything that happens in football before (insert date) is a quaint and amusing run-up to the stuff that matters.

When it comes to Edwardian football in particular, there’s a reluctance to admit that the game, far from representing “a simpler, slower world” was a finished project by 1913. Finished to the point where 121,919 people could ride brand new electric trains and trams to the beautiful stadium at Crystal Palace, buy a glossy colour match souvenir and, surrounded by lakes and parkland, watch Sunderland and Aston Villa, the two richest sides in England, conclude a bitter and physical feud that had gone on for the whole of the preceding season.

It’s in every early football memoir – the moment when the debut player realises just how much covert violence went on in league football. Subtle pinches and kicks, sometimes spitting. The 1913 Final was bad, worse than most perhaps, but no outlier.

According to one report: “Thomson had great difficulty in holding the nippy Villa inside forwards and fouled Hampton so badly that the centre forward was prostrate for several minutes. Later in the game Hampton viciously retaliated by kicking Thomson when he was on the ground and it was regrettable that the game was marred by such unseemly incidents.”

On the pitch for Sunderland that day was trainee teacher and new England international Charles Buchan, who wrote: “Thomson and Hampton soon got at loggerheads and rather overstepped the mark in one particular episode. Though neither was sent off the field, they each received a month’s suspension.”

Elsewhere on the pitch, Villa goalkeeper Sam Hardy was off the pitch for much of the second half with a badly smashed knee, and defender, Harrap, put in goal to replace him, took rough treatment from the Sunderland front line until Hardy returned.

Film cameras were almost certainly present. Although no footage of this Final survives, it does from earlier rounds, and there is no shortage of press images. Football photography had found its modern action-shot form by 1900. But they are hard to link decisively to the Thomson/Hampton battle.

An extraordinary seventeen minutes were added at the end for injuries, and referee Adams never saw a top-level match again. Villa won 1-0, including a missed penalty and a goal ruled out for offside. They lost out narrowly to Sunderland in a title decider shortly afterwards in front of 70,000 spectators. 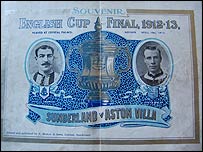 The 1913 Final, and the era it epitomises, needs to be understood on its own terms. Yet, and breaking that rule immediately, the future of football was on the pitch that day. Buchan and Aston Villa’s Clem Stephenson would both be intimately involved in Herbert Chapman’s disgrace at Leeds City in 1919 – and both would play a part in his astonishing triumphs of the next fifteen years. Buchan himself would rewrite English football tactics in 1925 after the pivotal change to the offside rule, and teams would adhere to his style right through to the end of the 1960s.

And he’d go on to found Charles Buchan’s Football Monthly, the magazine whose back numbers and turgid writing have inspired so many football men to look up, sigh, and write it was a simpler, slower world…