[The story so far… Alain de Botton has failed to persuade the Adult Contemporary sing-songwriters to build him his own international airport. Ed Balls is trying to ‘squash’ all of his rivals but particularly Ed Milliband. Meanwhile, Chakrabati and Bidisha, chief minions of sinister mirror-licking mastermind Julian Assange, have captured elusive poet Grayson Ellis and notorious hack Rod Lidl after Ellis survived an assasination attempt by a three-man team consisting of Tom Paulin, Micah White and Slavoj Zizek; Nina, Boris Johnson’s indomitable Latvian nanny, is in pursuit. …]

There is only one Perfect Spy and that is Noseybonk. Humming the above to the tune of Robin Hood, he tiptoes through the debris of a ransacked Montmartre apartment. Somebody has been searching here before but only Noseybonk knows where to look. From a false panel beneath the grime-smeared window he retrieves a safebox, and from that safebox, quickly cracked, he pulls a leatherbound journal and holds it up to the thin Parisian dawnlight…

May – Paris
In many ways I have become Dr Dylan Trigg and he has become me. When I enter this room, I do so knowing that the act of orientating myself in the room must in the first instant involve a dialectical standoff between the spatiality of my-Self and my-Other: my cover.

That, for example, is exactly the sort of thing that Trigg would say.

When ‘I’ first came to Paris, to the Centre de Recherche en Epistémologie Appliquée, struggling to make the transition from Visitor to Resident, then from Resident to Poseur, I took to walking the banks of the Seine at twilight, getting deeper into cover, meditating on the phenomenology of agoraphobia, getting deeper into Trigg.

Several times, on the way to a dead-letter box or to just to a lonely cinema down un rue, I caught the eyes of Others on me. Femmes with silent prams I half-recognised from my training jours, dogwalkers who lingered just a little too long over picking up merde (poopscooping is something true Parisians never do). I was not afraid for I knew they were just Control’s pavement artists making sure I was staying on the straight and narrow: the Circus keeping an eye on its investment. I would know the Sarratt tradecraft anywhere; I was there for trois years.

Paris Station took a month to make contact, and two weeks later I was running my first Joe: a sulky college girl, heartbreakingly beautiful but with the certain knowledge of death dans her eyes.

Now here I am, deep into my day job, my Professorial cover, turning up at school tous les jours to confront the remnants from the fallout of post-industrialism and postmodernism, trying like sheer bloody hell to create a model of post-rational aesthetics in which spatial order is challenged by an affirmative ethics of ruin.

July – Paris
Through my sulky, heartbreaking college girl Joe I have made contact with the enemy. What is the ‘enemy’? Merely the Self seen through the eyes of the Other. Who is the enemy? That’s easy, if we want to be literal. It’s Slavoj Zizek. And above him, the poet Tom Paulin. And below him, Micah White, codename ‘Messiah’. This is the three-man cell I am tasked with penetrating.

Paulin is the brains, eyes comme a hawk. Zizek is brute muscle, a scalp-hunter. I have attempted to emulate his imposing left-wing beard. White is the baby of the cell but in some ways he worries me the most: sometimes I feel he sees right through me. Or perhaps he just sees through Trigg.

October – Paris
It is colder every night. I am colder every day. Trigg is me, and I am the Other. I feel that more and more. But do I feel really feel anything? My suitcase is packed. Is his?

Trigg was close to a breakthrough in creating a new phenomenology of agoraphobia – I swear that – when London Station came knocking. The knocker was A.G., one of Control’s lamplighters. A decipher-yourself telegram between the book review pages of a two-day old copy of Le Monde. That’s typical A.G. handwriting.

By then I was running three Joes and sending six boxes of raw intelligence to Paris Station a week, without any idea of my mission. I found out that night, shivering over a café au lait with a cognac chaser under candlelight dans the Roue de la Prétentieux. It is the grand one. It is Julian Assange.

So now we know. Zizek, Paulin and White are just the monkeys we’re going to use to catch the organ-grinder. We are going to turn him inside out.

For a moment I felt the fleeting thrill of excitement, like the day when Control first made a pass at me and made me the latest star University of Sussex recruit to the Circus. Soon the thrill passed. That boy is dead. Decayed. I am too much Trigg now. That garcon is just a memory of Self-ness imprinted on this corporeal body.

Zizek and White are going to meet me in London. They trust me completely. Now I must go to Gare de Nord. The heavens are bright tonight. The Dog Star is watching. The Eurostar is waiting.

December – Shropshire
London Station is in uproar, Control is on the warpath. The elusive poet Grayson Ellis has been missing for three weeks and the whole mission is in jeopardy. Some hack called Lidl has got involved, also a Latvian domestic attached to the Mayor, status unknown. A.G denies the rumours she’s being run by Moscow Centre. It looks like she’s just rogue.

I am in a ruined safehouse at the edge of the moors, at the edge of the world. Something has happened at Titterstone Clee. Paulin came in with eyes like the certain knowledge of death, then disappeared into the driving rain. Zizek is crazier than ever. Neither is talking to White, and I’m stuck in the middle, undercover. A spy on a knife-edge, a Nobody.

A Big Lie dans a world of little lies.

Zizek, White and I have been holed up in this shotgun shack, drinking green tea and waiting in vain for word from Paulin, but he is nowhere, barely even a Memory of Corporeality. Over bratwurst and schnapps I tried to engage Zizek in a discussion of how phenomenology might contend with the abyssal experience that is no longer reducible to the objective components of space, but he just picks at his imposing left-wing beard and breaks wind inventively. Yet when the heavies turned up I saw real fear in his eyes.

They came like death, Bidisha and Chakrabarti, tiny in stature but with terrifying unity of movement. These are Assange’s real scalp-hunters, and for the first time I knew that Zizek and even Paulin were just more pawns dans le jeu.

Bidisha drove us to the capital, changing cars twice. Another safehouse, another seedy guesthouse, where I pen these words, against all sense. I have had no word from London Station. Do they even remember I exist? I am entirely alone. Alone except for Trigg, and even that Self decays by the hour, by the second.

January – London
I have seen Hell, for today it broke loose. Micah White is a double agent. He’s been playing both sides. Why didn’t London Station warn me? I am adrift.

The crisis came deep in the bowels of Assange’s lair, below the geeking minions.

Zizek, White and I were assigned to guard Grayson Ellis and Rod Lidl, two hollow men, bound, gagged and used up. Without warning White seized a hardback copy of Environmental and Architectural Phenomenology Vol. 17: Issue 1, 2006 (which coincidentally contains my, or should I say Trigg’s, essay Memories in Site: Towards a Renewed Understanding of Starbucks) and clubbed an unsuspecting Zizek on the back of the head with it while the deranged academic was attempting to break wind to the tune of the Star Spangled Banner.

I was frozen as White approached me. “It is safer for you this way,” he said. “Pretend you put up a fight.” And then he raised the heavy book and all was darkness. 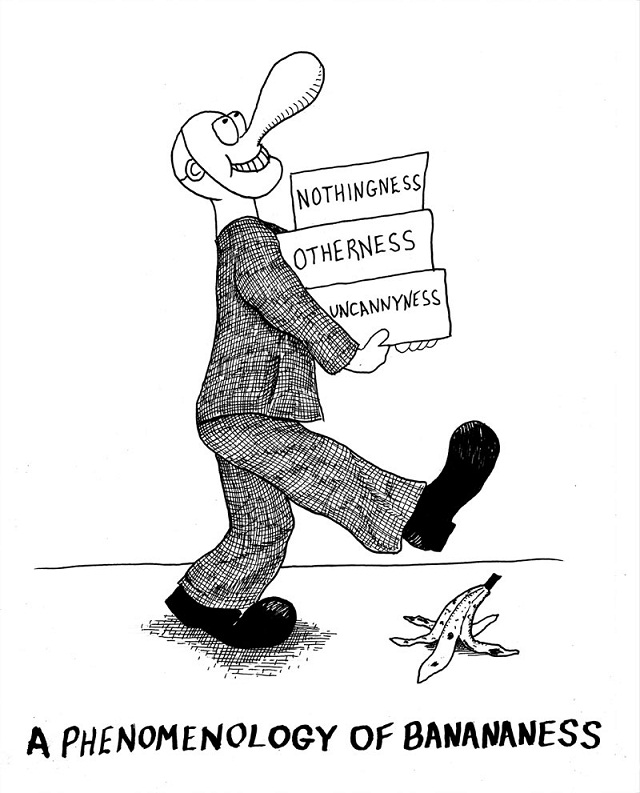 Bored, Noseybonk tosses the journal of twaddle aside and hops onto the ceiling to wait.

Bang! Bang! Bang! And at the sixth bang the door gives way to the force of the elegantly stilettoed kick. A figure enters the Montmartre apartment and scans the ransacked ruins. Her face is indomitably Latvian. She is Nina, nanny to Boris Johnson, Mayor of London.

Peering determinedly left and right, but not up, she crosses the room and picks up the journal…

February – Paris
I am back at the Centre de Recherche en Epistémologie Appliquée. I am back to walking the banks of the Seine by twilight. Perhaps I never left, because Trigg never left.

I am no longer running any of my Joes parce que nobody is running me. The Zizek-Paulin-White cell is finished. White vanished to qui knows where, Paulin is dead or worse. Paris Station is blown and has been rolled up. A.G. and a faceless housekeeper from the Circus came and took the backbearings, subjected me to a three day ‘interview’ then decided I was safe to abandon to the rues of Paris.

If the human being dies, leaving only the body in its place, then the reverse is also vrai: sometimes, the body remains in place while the Self disappears.The self shrinks from the world, as the body blindly persists in the darkness, its organs and internal structure maintaining homeostatic balance. Only now, at the service of a self whose identity is not entirely clear, is the corporeal ‘real’. I feel I am approaching a unity. Trigg is me and I am Trigg.

As with any new projet, the probleme is one of getting placed, of establishing orientation amidst a labyrinth of different ideas, all of which are framed entre the themes of embodiment, inter-subjectivity, and agoraphobia. My point of departure is this question: how can the gaze of the other make me disappear? I have skirted around this in various ways before, largely through considering Heidegger’s analysis of anxiety and the Nothing.

Now I am ready to face it.

I am ready to Disappear.

Unseen by the Latvian nanny Noseybonk swings out the window and off along the rooftops and lampposts, humming the below to the tune of Robin Hood …

Dylan Trigg, author of
The Aesthetics of Decay
His cover’s blown, he’s all alone
And now he’s flown away.
But who is on the trail
Deeper and deeper?
Nina theeee … Latviaaaaan … Housekeeperrrrr!

To be continued. Apologies to Dylan Trigg, John Le Carre and both the English and French languages. Noseybonk can see you. Illustration by Stan Madeley.