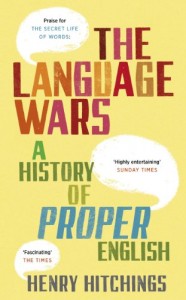 As well as being the theatre critic for the Evening Standard and an occasional television presenter, Henry Hitchings is one of the leading authors on language and cultural history. His book The Secret Life of Words won the John Llewellyn Rhys Prize and his other acclaimed works include Who’s Afraid of Jane Austen? and Dr Johnson`s Dictionary.

Henry’s latest book is The Language Wars, described in the Sunday Times as “a richly detailed and often delightfully combative….guide to the sometimes splenetic battles that have been fought over English down the centuries”. In an exclusive post for The Dabbler, Henry examines the language of blogging…

The Dabbler, if I’ve properly understood its name and ethos, is all about exploring subjects in which one is not an expert. So, at the risk of seeming tricksy or ironic, I want to use this platform to reflect on my experience of blogs.

I am not a blogger. I don’t say that proudly; I enjoy reading blogs on many different subjects – theatre, for instance, and tennis and books – but before now I have not added my voice to the blogosphere.

In many of the areas that interest me most, bloggers have become an important part of the critical ecosystem. For example, in the world of theatre, as an increasing number of knowledgeable amateurs post online their assessments of current and forthcoming productions, there is a persistent debate about whether the professional critics who write for ‘dead tree’ publications are obsolete.

This is not the place to revisit that controversy. Rather, as someone who reads blogs, I want to reflect – in tentative, Dabbler-ish style – on the question of whether there is a kind of writing peculiar to this newish medium.

I recently asked three friends if they thought there were features of the language used by bloggers that distinguished it from other forms of writing. One replied, ‘Yes, obviously.’ Another felt the opposite: ‘Why should there be? If anyone insists that blogging is somehow an amazing step forward for language, it’s just a way of trying to dignify blogs.’ The third did a good impression of having spent the last few years living under a stone, saying, ‘Remind me what a blog is.’

I first started reading blogs in 2001 or 2002. Blogging has been around since the 1990s, but I think the first blog to which I paid much attention was Glenn Reynolds’s Instapundit. Reynolds was at one time arguably the king of the bloggers – he has since fallen some way down the pecking order – but I can remember his arguing, in his heyday, that the rise of bloggers and the tools they use would soon force the traditional media to become more agile.

In 2006 Time magazine, in its own bid to appear more agile, acknowledged the rise of blogging when it announced that its ‘person of the year’ was ‘you’. Though widely criticized, the magazine’s choice was an endorsement of the increasing significance of user-generated content, for by ‘you’ it meant ‘the many wresting power from the few’ – those furnishing sites such as Wikipedia and YouTube, and of course the increasingly vocal authors of blogs.

That emphasis on the personal is apt. When people blog, they know they are making their thoughts public, but, whereas in many other public performances (a radio appearance, say, or a speech at a wedding) they are likely to temper some of their idiosyncrasies, in a blog the style of writing is nakedly personal, as if the author is thinking aloud.

No reader will be dazzled by the brilliance of this observation. Of course blogs tend to be characterized by an air of intimacy. Yet this intimacy is often a posture. It involves some packaging. There is a common perception that blogging is an activity that people fit into their leisure time, but every blog is strategic – a private matter that manifests an awareness of its also being a public matter.

The blog is an example of a technology that is ‘pull’ rather than ‘push’: it is a case of your finding it, not of its finding you. Blogs don’t foist themselves upon your consciousness. This is why blogs begin conversations; instead of having the sense of being bombarded with unsolicited rubbish, we feel as though we have bumped into someone we’d like to know better.

Yet no matter how candid or unvarnished their self-revelations seem, bloggers are always projecting personae. Indeed, one experience bloggers often mention is that through blogging they have discovered a sense of self quite different from the one with which they set out.

Critics complain that this sense of self is rendered in infelicitous ways. They note that the phrasing of many blog posts is untouched by conventional notions of grammar. They also point out that quirky punctuation proliferates, and that clannish in-jokes share space with opaque abbreviations. Emotions are exaggerated. Informality reigns.

It is true that some bloggers make use of strange acronyms and cutesy emoticons. It is also true that new words have been coined by bloggers: some have gained currency (‘dooced’, ‘troll’, ‘teh’ as a perverse alternative to ‘the’), while many others just seem esoteric. In general, new media have encouraged an expressive shorthand – a significant linguistic development.

However, lots of bloggers are scrupulous about observing the conventions of standard written usage (though the ‘standard’ is hardly a matter of concrete certainty). More interesting perhaps than the localized stylistic peculiarities of blogs is the influence of blogging on the way we write elsewhere. This is at once more subtle and more pervasive.

Blogging has played – and is continuing to play – a crucial role in redefining notions of what it means to be a reporter, a journalist, a chonicler and a commentator. A blog is a real-time news channel, even if it may not always feel that way (the news may be about the antics of someone’s kitten or the slow conquest of a daunting work of literature).

Increasingly, news reporting and other forms of non-fiction are taking on ‘bloggy’ characteristics: in particular, an obsession with timeliness, a love of insider knowledge, the assumption that the author and reader are friends, an addiction rather than an aversion to being composed on the fly, the belief that stacking fragments can be just as valuable as creating smooth narratives, and even an attempt to reproduce that staple feature of the blogosphere, a miscellany of relevant and not-so-relevant links, which at its best makes our experience of information three-dimensional.

Blogs appear to foster an unlimited expository style of writing. By this I mean that they are not constrained by the norms of any formally defined genre. The linguist David Crystal has termed this unfettered and idiosyncratic style of writing ‘free prose’. As a friend once said to me, with delicious ambiguity, ‘On the internet you don’t have a bottom.’ In other words, there always seems to be room for more: more information, more personal reflection, more conversation.

In the blogosphere, what we write is provisional. When we blog, we don’t think about producing a text that at some point in the future will have an adamantine fixity; instead we enjoy the immediacy of what we write, savouring its sheer presence, and knowing that the positions we are taking now can be adjusted tomorrow.

This has a paradoxical effect. Because we know that the things we say in a blog are provisional, we say them with greater vehemence, not less. That vehemence is in part an invitation for disagreement. As one of the UK’s best young writers about the theatre, Matt Trueman, puts it on his personal blog, ‘The contents of this blog should be shouted down, ridiculed and torn apart. Please comment and polemicize.’ Although Trueman is not guilty of being immoderate, the implication is clear: the arguments being set out are a goad.

If we can take back what we’ve said, but if in the first instance we want it to be heard, it makes sense to say it loud. Is it possible, then, that the freedom afforded by blogging is a chimera? That the medium, instead of helping us to be discreetly exploratory, obliges us to be noisy? That while it turns us into curators, it also requires us to be free-associators, for whom making a racket is a sort of heroism?

The Language Wars is available from Amazon as well as all good bookshops (and some rubbish ones).

6 thoughts on “Henry Hitchings – The Language Wars… and Blogging”