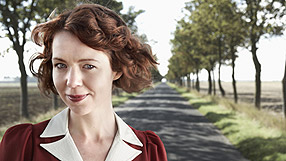 Sunday evening, you’ve gloomily ironed your shirts for the week and now it’s time to settle on the sofa with a dram and see what the BBC has to offer you.  A train appearing through steam, a man on a horse galloping along the beach, cars with running boards and a woman in a bright red calf-length dress and round hat, who shines out among the grey of a town and the faces of the unemployed. You are warned that there will be scenes of a sexual nature.  Of course, it’s an adaptation by Andrew Davies , the man who loves a good corset-undoing scene for the Victorians, wet breeches for the Regency period and this one, South Riding (BBC1, Sundays 9pm) being modern, we can expect stocking tops and suspenders.

Andrew Davies’s adaptations vary  in quality.  Vanity Fair was excellent, while the last Emma was a downer, as was Daniel Deronda, partly because the actress in them, Romola Garai, is a lightweight and spent most of her time smiling like crazy, as if advertising toothpaste.

You can expect in a BBC period drama that the researchers will get the cut of the clothes and the shape of the vehicles right, but Davies is responsible for the dialogue.  I haven’t got a copy of South Riding to hand, but I’m pretty sure this was not 1930s speak:-

“it sends a message that the girls are valued”

A school is “affordable”

About a Council decision “What is needed is transparency”

Those phrases are from more recent times, that of the Today programme interviewing a politician post about 1980.  Are we going to have “robust” by-laws next?

Despite those niggles the story has got going nicely.  Sarah Burton, a progressive and socialist, has been appointed headmistress to the girls’ high school in a Yorkshire town.  Her appointment is opposed by the Conservative councillor and landowner, Robert Carne, who is struggling financially and has a neurotic daughter and a wife in an asylum.  Sarah Burton is played by Anna Maxwell Martin, and looks and feels right, not celebrity pretty but attractive, a red-haired powerhouse full of reforming zeal, a Jennie Lee of her time and place. David Morrissey as Robert Carne is heavy and brooding, which is all you need for the part.  Robert Carne has a grand house, a  tragic life and a masculine presence, which is enough for romantic appeal.  After the initial antagonism the two have been thrown into each other’s company in a calf birthing scene in a barn, and that was mellow and warm with the colours of the Jersey cows and the hay.  The scenery of wide skies and flat countryside, the shabby school, the grey town and the general period feel are well done.

South Riding was made into a series  in 1974 with Dorothy Tutin playing Sarah Burton.  It was thirteen episodes long, while this series is three only.  The earlier series was panoramic like Winifred Holtby’s novel, the structure of which was held together by the decisions of the town councillors, and how they affected the different characters, from high to low.  That big cast of characters are mostly going to have to be dropped or reduced and we’ll lose the wide view for a more focused drama but that has plenty going for it. Lydia Holly, for instance, (Charlie-May Clark), a clever, talented girl with uncontrollable hair has a short scene with her impoverished family, when her ebullient labourer father and she quote How Horatio Kept the Bridge at each other.  The family’s life is very poor – they live in a railway carriage – but not loveless and miserable and that gives Lydia a real spark.  Andrew Davies has kept Councillor Huggins (John Henshaw) the lay preacher and adulterer, who I would guess has been left in as he’ll grope around a few stocking tops and he has a great good-time girl (Janine Mellor) to fondle.

So plenty of dramatic interest, competent acting, a fine appearance, an okay script.  Not up there with Cranford but of a reasonable standard, and like the Shipping Forecast, shows that the BBC is ticking along and all is right with the world.