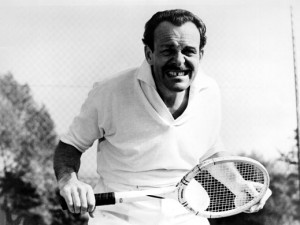 Our friends at Slightly Foxed (the real readers’ quarterly – buy a subscription now!) have once again kindly allowed The Dabbler to dip into its rich archives. We have handpicked this gem for you from the Autumn 09 edition, in which author Andrew Martin looks at the ‘Upmanship’ books of Stephen Potter…

I first encountered the work of Stephen Potter in a TV sketch show that conflated the great comedy quartet of his ‘Upmanship’ books: The Theory and Practice of Gamesmanship, Lifemanship, One-Upmanship and Supermanship, published by Rupert Hart-Davis between the late Forties and late Fifties. The TV series began in 1974, when I was 12, by which time Potter had been dead for five years. Having recently discovered A. G. Macdonell’s England, Their England, I was just learning that sustained drollery is better than a series of gags, and these programmes seemed another lesson to that effect.

On taking the books out of York Library (you won’t find Potter in many public libraries today) I was struck by the combination of well-mannered elegance in the writing, and the brutality of the cod social advice given: the section in Lifemanship starkly headed ‘How to Make People Feel Awkward about Religion’ . . . or a passage in the same book about how to trip up a man who really knows what he’s talking about. The example is given of an ‘expert’ annoyingly holding the floor after a fortnight in Florence: ‘And I was glad to see with my own eyes that this Left-Wing Catholicism is definitely on the increase in Tuscany’, to which Potter urges the Lifeman to counter, ‘Yes, but not in the South.’ This struck me as not only amusing but also practically useful – a remark that really would check the speaker, and at no cost to the Lifeman, it being completely unanswerable. When Potter added that ‘Yes, but not in the South’ would do for any argument about any place, I believed him, and I still do.

I have always felt a kinship with Potter. By the age of 12 I’d worked out that the sole point of social interaction was to make the other party feel slightly inferior, and he was the first person I encountered bold enough to say so. There was one mystery about him, however. Whereas my own northern, upper-working/lower-middle circumstances would seem to justify a degree of churlishness and chippiness, Potter’s did not appear to do so. I was vaguely aware that he was a shambling, endearing chain-smoker who’d lived the sort of well-padded life that writers used to have, progressing urbanely from public school to Oxford, to the BBC via a stint in academia. But when, in 1980, Alan Jenkins’s excellent biography of Potter appeared, I began to see why he would want to write a series of books setting out the absolute necessity of ‘breaking the flow’ of the man who was genuinely good at golf or billiards; or how to counter ‘the deadly one-upness of the man who, say, has really been to Russia, has genuinely taken a course in psychiatry, has actually read history at Oxford, or has written a book on something’.

Potter was educated at Westminster, but he grew up in Clapham, and his father was an accountant. He became an officer in the Coldstream Guards, but only just (Second Lieutenant), and he was too late to see action in the Great War. He went to Oxford, but he missed out on a First and the Blue that he might have expected in tennis or rowing.

He became a successful BBC radio producer with an iconoclastic style – his trademark was the cross-fading of gramophones – and this is not at all surprising, since his comic books demonstrate a wonderfully acute ear. But he always wanted to be a Great Writer, or at least a literary critic. His first book was a psychologically intense novel, unpromisingly entitled The Young Man. It was praised by Vita Sackville-West and L. P. Hartley, but Potter knew it hadn’t really worked. He then produced a rather po-faced, if competent, study of D. H. Lawrence, for which he would atone in Supermanship by inventing the character of ‘The Lawrence-man’, an arch, ginger-bearded figure whose ploy is deliberately to exasperate people by making wispy remarks such as ‘the cool prying of the North child can never find the secret of Poplihotl’. When invited to ‘make himself clear’, he responds infuriatingly, ‘Can anybody make themselves clear?’

Next came The Muse in Chains, a semi-satirical take on the industry of ‘lit. crit.’, and this laid the ground for the humour that would follow, which itself would be couched, like 1066 and All That, in a quasi-academic style, with footnotes and elaborate, courtly acknowledgement of sources, all meant to give the impression that seeking to be One-Up is a legitimate and widely practised discipline.

The first book, Gamesmanship, is devoted to ‘the art of winning games without actually cheating’ and begins with an account of ‘Joad’s Gambit’, which was essayed during a tennis match in London on 8 June 1931. Joad was Dr C. E. Joad, the pugnacious popular philosopher and Lifeman, who would go on to annoy thousands of listeners to the radio programme, The Brains Trust, every week by responding to audience questions with the supremely patronizing formula, ‘It depends what you mean by . . .’ Joad was a good friend of Potter’s, and they played tennis together, so the story of the gambit – which runs as follows – may actually be true.

In a game of doubles, Potter and Joad were up against two athletic, well-mannered young men. They were forty-love down in the opening set, and Joad had just managed to get a racket on the rocketing serve of one of the two young men, only for his return to volley into the stop-netting a good twelve feet beyond the base line, whereupon he called across the net in a perfectly even tone: ‘Kindly say clearly, please, whether the ball is in or out.’ Potter observes of his friend’s sally: ‘Crude to our ears, perhaps. A Stone-Age implement. But beautifully accurate gamesmanship for 1931.’ The point being that there’s nothing more off-putting to the well-bred young sportsman than ‘a slight suggestion that their etiquette or sportsmanship is in question’.

In Gamesmanship we learn that there are eighteen ways of saying ‘Bad luck’; and how to irritate an opponent by talking ‘Snooker-player’s Drivel’: a matter of not saying simply ‘five’ or ‘eight’ after scoring five or eight, but always ‘five skins’, ‘eight skins’ and so on. Golfers will learn how to distract and annoy an opponent by constant references to the apparently more important game lined up for the next day. Potter suggests, ‘Construct a story that you are playing A. J. du C. Masterman.’ (Names, he observes in a footnote, ‘impress according to the square of their initials’.)

The book is very funny, and the next two are just as good, and even more cynical. As a Grub Street practitioner myself, I particularly enjoy the notes on ‘writership’ in Lifemanship: ‘A. C. Y. Davies invented a means of wording his dedications so that criticism of his book was practically impossible, e.g.: “To Phyllis, in the hope that one day God’s glorious gift of sight will be restored to her.”’ Among the techniques for inducing ‘glaciation’ (‘gambits designed to induce an awkward silence’) he includes ‘languaging up’ – ‘to confuse, irritate or depress by the use of foreign words’:

If the subject is the relative methods of various orchestral conductors, for instance, say something early on about the ‘tentade’ of Boult. Three minutes later contrast the ‘fuldenbiener’ of Kubelik, and the firm ‘austag, austag’ of his beat ‘which Brahms would have delighted in’.

From One-Upmanship, I would commend the notes on ‘winemanship’, and Potter’s recommendation against saying ‘too much about the wine being “sound” or “pleasant”: people will think you have simply been mugging up a wine-merchant’s catalogue’. He urges instead the ‘boldly meaningless’ remark: ‘It’s a little bit cornery’ or, simply, ‘Too many tramlines’ (which I’m sure would still be infallible today if there still were trams).

On the strength of Lifemanship, Potter acquired a large manor house near Aldeburgh, and he was overwhelmed with journalistic commissions. He was also fêted in America; Adlai Stevenson used the word ‘brinkmanship’ to describe the foreign policy of John Foster Dulles, and at a cocktail party he acknowledged, to Potter himself, that he had borrowed the word from him.

But this was Potter’s high point. One-Upmanship, although another best-seller, did not quite match its predecessor. Potter then went into a minor key with a thoughtful but specialist book called Sense of Humour, a survey of British humorous writing in which he selected among his personal favourites The Diary of a Nobody, Peter Ustinov’s stage patter, and the spoof exam papers from 1066 and All That (‘Do not attempt to write on both sides of the papers at once.’).

In it he concludes that observation is the secret of English humour, but I like his own writing best when it goes beyond well-observed psychology and into the sheer liberating silliness of ‘too many tramlines’. This quality is certainly present in the last of the quartet, Supermanship, especially in the section on ‘reviewmanship’: ‘Reviewing novels is a more difficult problem and may even entail actual reading of the first and last chapters.’ The book is sprightly on the theme of ‘when to use spidery handwriting’ and on babies: ‘babies are by nature one-up. Whatever they do is your fault, and your fault only.’ But there are signs of strain, and a melancholia that is always likely to manifest itself when the theme is curtailing the success of others. By now Potter had divorced and remarried, a heart condition was asserting itself, and his audience was dwindling.

In later life, Potter was proud to have the approbation of James Thurber, but he’s funnier than Thurber if you ask me. If you ask me, he’s funnier than anyone, and I wish that Penguin, who reprinted his books in the Sixties, would do so again. Would the social ploys he describes work in our coarser, less nuanced era? I think so, and in any case the attentive reader would extrapolate from them. I’ve been doing this for years. If I attend a rather precious literary gathering with a copy of Autosport protruding from my jacket pocket, that’s a piece of pure Potter. If, on my wife asking, ‘You don’t look well, are you all right?’ I wince fleetingly before manfully responding, ‘Absolutely fine, yes’, then so is that, and I mentally salute the founding father.

Gamesmanship and other Stephen Potter books can be bought online. Andrew Martin is the author of numerous books, including the ‘Jim Stringer’ detective series, the latest of which is Last Train to Scarborough.

8 thoughts on “Chips with Everything: Stephen Potter and Upmanship”