Well done to the inimitable Stan Madeley, who cracked the lastest quiz while Adelephant was down the shops, though she returned in time to get the trickiest bit, drat her. Click continue for the full answers if you’ve given up…

Earlier we posed the sixth Round Blogworld quiz question, namely:

What connects to a female Quaker to some cheap British smokes and Scorsese’s new Empire, a good cry, K9 and a certain Miss Kimberley Santos?

And the answer is… Monopoly!

The origins of the hellish, endless, family-destroying boardgame Monopoly can be traced back to a female Quaker from Maryland called Lizzie Magie, who created something she called The Landlord’s Game in an attempt to explain the single tax theory of Henry George (it was intended to illustrate the negative aspects of concentrating land in private monopolies). Or possibly she created it as a curse on humanity and cackled as she did so. You can read about how others picked up and developed the game into its modern form here.

Scorcese’s new Empire refers to Boardwalk Empire, the director’s new television drama. Boardwalk is the most expensive property in the traditional US version of the game – and its equivalent in the British version is Mayfair. Mayfair cigarettes are one of the cheapest brand of smokes. Not that any smokes are cheap these days, mind.

What do you do if you have a good cry? Why, you turn on the waterworks of course. The Water Works and Electric Company are a complete waste of time in Monopoly – never buy them. Incidentally, while we’re on Monopoly tactics it has apparently been scientifically proven that the best properties to buy are the orange ones, since they are landed on most often during play thanks to the Chance cards Go to Jail, Advance to Pall Mall, Advance to King’s Cross Station and Go Back Three Spaces. 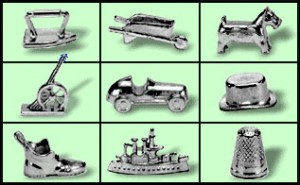 K9 is a sneaky one. K9 was Doctor Who’s robot mutt – hence a metal dog, one of the famously bizarre assortment of playing pieces.

Finally, who the hell is Miss Kimberley Santos? She was the runner-up in the 1980 Miss World competition of course. The winner, Germany’s Gabriella Brum, resigned 18 hours after her victory, already fed up with the media pressure. Kimberley, represented Guam, was crowned in her stead. Winning second prize in a beauty contest is an always hilarious Community Chest card, since it allows fellow competitors to make such quips as “First prize was won by Ann Widdecombe’s arse” et cetera.

Do you have a suitably fiendish quiz question up your sleeve? It should follow a similar ‘link this to that’ format. If so, email it to brit@thedabbler.co.uk  and we’ll help with phrasing etc if necessary.