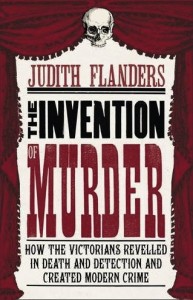 Judith Flanders’ new book, The Invention of Murder (HarperCollins) takes a fascinating look at Victorian society through the prism of its obession with murder: the real-life cases where every gruesome detail is relished by a bloodthirsty press; and the ubiquity of murder in novels, plays and Victorian culture generally. The book has earned rave reviews and was recently selected as BBC Radio 4’s Book of the Week.

In an exclusive article for The Dabbler, Judith looks at the Victorian origins of detective fiction, and wonders, “What came ‘first’?”…

T. S. Eliot once called Wilkie Collins’ novel The Moonstone ‘the first and the best of English detective-novels’. ‘The best’ is a matter of taste; and, oddly, the ‘first’ is almost as hard to define – do the detectives have to be professional, do they have to belong to a police force, do they have to be the major precipitating element in the discovery of the criminal, do ‘novels’ include penny-dreadfuls, those serialized pamphlets that were later published as single volumes?

One of the great discoveries in writing The Invention of Murder was how deep the influences run, how much every writer takes, knowingly and unknowingly, from others. So many ‘firsts’ burst out in the 1860s, to create a new genre, the detective story.

In 1860 Mary Elizabeth Braddon (better known as the author of Lady Audley’s Secret, filled with bigamy, madness and murder) published The Trail of the Serpent, a novel with a professional policeman whose job it is to solve the mystery; just as in later detective-fiction, he has a gimmick (he is mute); and just as in later detective-fiction, he is helped by a sidekick, in his case a boy named Sloshy. (This actually is two conventions for the price of one – a sidekick to explain the plot to, and using children who hang about in the streets unnoticed, as Sherlock Holmes would later use his Baker Street Irregulars.)

Two years later, an even more extraordinary ‘first’ appeared, with Ruth Trail, who is a female detective. In fiction at least, women were in at the death from the beginning, with their male authors suggesting that they might even be superior to men: Ruth is ‘a sort of spy we use in the hanky-panky way when a man would be too clumsy’. Rather splendidly, she is not part of the regular police, but ‘attached to a notorious Secret Intelligence Office’, one so secret that the office has a brass plaque on the door: ‘Secret Agent’, it reads.

Even Sherlock Holmes, who was ‘born’ in 1887, has his origins in this earlier time. Sheridan Le Fanu, the Irish gothic story-writer, published A Lost Name in the same magic ‘first’ decade of the 1860s. Here the suspect (later vindicated) was named Carmel Sherlock. Conan Doyle always claimed that a cricketer was the origin of his detective’s unusual name, and he may have been, but it seems likely that Doyle’s subconscious might also have been half-remembering Le Fanu. Certainly it seems as if Doyle had read Wilkie Collins’ My Lady’s Money, published a decade before Holmes appeared: ‘Old Sharon’ is a private detective who, like Holmes, is an outsider, a bohemian: he is first seen ‘through a thick cloud of tobacco-smoke…robed in a tattered flannel dressing-gown, with a short pipe in his mouth’, a very good description of the more famous Baker Street resident.

Some long-buried influences show up in the most surprising places. Arthur Morrison’s stories about Martin Hewitt, a young clerk who sets himself up as a private detective, were popular in the 1890s. In one of the stories, Martin Hewitt investigates a case where a runner is prevented from entering a race in order to fix the odds for a group of gamblers. One of the characters in the story is called Steggles, and if P.G. Wodehouse did not read this as a thirteen-year-old schoolboy, before growing up to write ‘The Great Sermon Handicap’ in 1922, where a crooked bookie named Steggles rigs a bet, then I will eat my deerstalker.

The Invention of Murder (HarperCollins £20) has just been published, and you can read more about Judith and her previous books at her website: www.judithflanders.co.uk

6 thoughts on “Judith Flanders – The Invention of Murder Fiction”