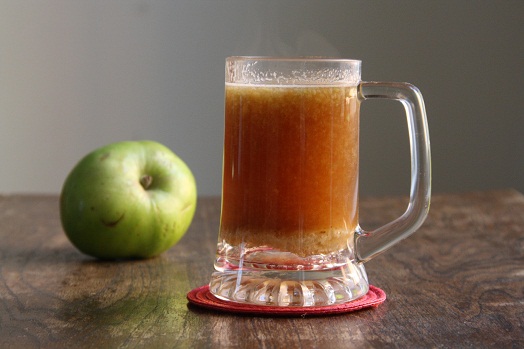 Young whippersnappers will have taken down their Christmas tree last week, on the 6th January. But those of us who still aren’t quite sure about the Gregorian calendar changeover will celebrate Twelfth Night on the 17th January with a wassail.

Wassailing first appears in records in the 15th century, but as the name derives from the Old English waes hael, meaning “be healthy/hole”, the tradition probably has its origins in those misty times before the Norman Conquest. There are two ways to wassail: visiting your neighbours’ homes and demanding food and drink in exchange for blessings or visiting the orchards to jolly along the apple trees and persuade them to fruit well in the autumn.

The occasional band of ragged carol singers keeps the former tradition alive at Christmas, while the apple orchards of Devon, Cornwall, Herefordshire and, somewhat surprisingly, Willesden Green, will receive the attentions of drunken revellers in 2011. The wassailers will bang pots and pans to scare away bad spirits and leave gifts of toast dipped in wassail in the branches of the trees.

The wassail can be made from ale or cider, depending on what’s local to your area. The recipe below is called lambswool after the fluffy apple purée that rises to the top of the drink and looks like lambs’ wool. It tastes both bitter and sweet (and like it will give you a shocking hangover). Like most mulled drinks, it tastes better if you make it a few hours ahead and then reheat it.

1 Preheat the oven to gas mark 2/150°C/fan oven 130°C. Grease an ovenproof dish with a little butter and place the apples in it. Bake for 45 minutes, until the apples are very pulpy and tender.

2 Pull the skin from the apples, leaving as much apple pulp behind as possible, and discard. Mash with a fork to make a smooth pulp. Set aside.

3 Place the sugar and a splash of ale into a saucepan and gently heat, stirring, until the sugar has dissolved. Add the remaining ale and the spices. Bring to a gentle simmer, stirring occasionally, then whisk in the apple pulp. Gently simmer the lambswool for 30 minutes.

4 Cut circles from the toasted bread to neatly fit the mugs or heatproof glasses you’re going to serve the lambswool in. Place the toasts (sippets) in the bottom of the glasses and sprinkle with a little cinnamon. Whisk up the lambswool and ladle into the mugs. Let it sit for a few minutes so the apple puree rises to the surface before serving. Wassail!

9 thoughts on “Dabbler Soup – Wassailing by”