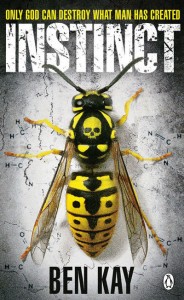 Ben Kay is a seriously talented chap. Not content with being an award-winning advertising creative and proprietor of a highly respected industry blog , he decided to turn his skills and his spare time to creating a high-octane blockbuster novel. The result, Instinct, an apocalyptic sci-fi thriller about deadly mutant wasps, is currently riding high in the bestseller charts. Here Ben gives us the inside story on what it’s like for a writer to enter the murky world of bestselling paperback fiction…

The first time I met my editor I asked him if there was anything he wanted to change about my manuscript.

‘Really?’ I replied. ‘But everything I’ve read about writing books tells you how important it is to trim them to their essentials, to remove any excess words and make the prose as economical as possible.’

He smiled to himself then leaned in.

I swallowed my pride/dignity/gin and tonic and realised once and for all that I had written a book that would not be troubling the jurors of the Booker. Until that point I had thought that books were books, and although my writing was closer to that of Michael Crichton than Michael Frayn, I was unaware that a whole new set of rules applied to what I was doing.

The main difference is that you have to be simultaneously proud and ashamed of what you have done. Yes, you have managed to point 100,000 words in the same direction, structuring a story and developing characters that give your readers a voracious appetite for turning the page. But on the other hand you have almost certainly chosen popularity over quality, the blockbuster over the plucky indie, the dreams of avarice over starving in a garret.

For many in the world of publishing there is no greater crime. It is as if you have stood up in the middle of a dinner party and chosen to defend Michael Bay over Ingmar Bergman. You will not be reviewed in the Spectator, LRB or Observer (not until you have made a name for yourself at least). You will not be profiled in The Culture section of The Sunday Times (ditto) and you will not be sold in Waterstones (ditto).

Instead you must take your delight in a four-star review in the News of the World, shelf space in Tesco, and enough daily sales to choke a hippo.

And I am indeed delighted at such things. Having a novel published is a thrill that ranks alongside the best of my life. With the odds against such an occurrence being as long as they are, it’s like placing a bet at 500-1 and spending five years gently coaxing it home, knowing that at any moment it could pull up lame. For months it will be the first thing your friends ask about; you get to write acknowledgements that express gratitude to the manger of Arsenal then see them printed in a book with that little penguin on the front, and the strange high you get from seeing it on the shelves of WH Smith will be all the sweeter for being impossible to come by any other way.

I never made a deliberate decision to write something ‘popular’ over something literary. I just wrote something I wanted to read. Aside from the sequel (already written in a fit of misguided optimism), the other plots I wish to explore are not in the techno thriller genre, but then my tastes are eclectic and I’d be a bit of a hypocrite to look down my nose at that which gives me pleasure.

For now I’ll just enjoy the positive feedback and see if my next book qualifies as ‘literary’. Then I’ll just be embarrassed about the poor sales, compensating myself with the relief that I’ll never again have to describe my plot by using the words ‘giant’ and ‘wasp’

17 thoughts on “Ben Kay on Instinct”