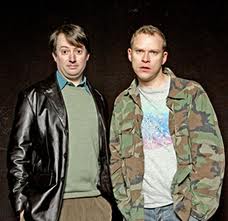 So Peep Show is back with us, the nastiest and funniest of comedies.

For those who don’t watch it, the show follows the grubby lives of two loser friends and flatmates.  One is a  wimp, a corporate drone and a geek (David Mitchell as Mark) and the other a chancer, a fantasist and wannabe rock star (Robert Webb as Jeremy).  You follow their internal monologues and then when one of them speaks to another character, you see the face of that character – smiling, snogging, furious – from their point of view.  So as you watch you are moved from voice over soliloquy to dialogue or action seen through one pair of eyes, which gives the show a slightly jerky feel.  We observe what they observe.  The characters exist in their own skulls and make guesses about what’s going on in other people‘s.

In my time I have missed chunks of Peep Show but that’s like missing a few Sherlock Holmes stories.   Mark and Jeremy are like Holmes and Watson (with Mark as Holmes, i.e. getting the better lines) in that you can pick them up at any time and enjoy their personalities and turns of phrase.   So as I welcome Holmes saying, “I see by your tweed socks, sheep hide patch on the left elbow of your jacket and the cracked fingernail on your third finger you must have served on the Indian frontier with the Royal Fuzz Cuffs, “ so in the first episode of this series I was glad to hear again the resigned and dismayed tones of Mark at the hospital while his ex girlfriend Sophie gave birth to their child.

Mark, full of fear and self-loathing, as usual, was at his ineffectual best trying to escape from being Sophie’s birthing partner, because he‘s “stuck on the medical channel and there’s no remote control”.  He flees to a video games room to be “in the safe zone with gangsters and deserted subways” but he returns to find Sophie getting a Caesarean, and when he looks at her south end, thinks “the screen is there for a reason, there’s a reason they put Guantanamo on Cuba”.

I have seen three episodes of the seventh series and things have been more upbeat for Mark than usual.  On seeing his new born baby he has a happy fatherhood twinge:-  “My son can figure out cold fusion, not as one of the main guys, that would be unrealistic, but in an administrative capacity.”

Mark is a less obnoxious character than Jeremy, and has a worse time, so you can enjoy his occasional wins.  Mark’s super-ego crushes his id, and stresses out his ego, while Jeremy dispels the vague rumours he has heard of a super-ego with drugs.  As you are in their heads and so pretty much on their side you can root for both Mark and Jeremy getting the better of people who are more repulsive than they are .

I’ve been asked,  “what’s a woman’s view of the programme. Don’t you find it rather horrifying to actually hear what it is that men are thinking?! For, sadly and shamefully, these two are but extreme versions of the male of our species.”  Well,  I’m with the two men, as I’m with Hamlet or David Copperfield.  I‘m seeing it all through their eyes and thinking through their thoughts, not those of the various women who they would like to shag but don’t want to be inconvenienced by.  Solipsism and liking to get what we want isn’t a gender-related attribute.

10 thoughts on “Through the Screen, Darkly or Fear and Self-Loathing in Croydon”