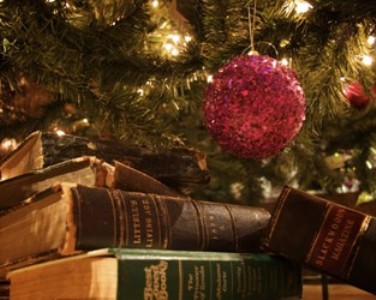 By now you will be feeling a vague unease in the back of your brainbox about the Christmas gifts you haven’t yet bought for family, friends and foes. If you fail to address this problem, that unease will turn into disquiet, then a Weltschmerz, then an angst and finally a full-blown panic.

Fortunately, The Dabbler is at hand to help nip this catastrophic psychological sequence in the bud.

By buying any, or preferably all, of the Dabbler-related books below you will not only furnish your friends’ libraries with fine tomes and earn their gratitude, respec’ and adoration, you will be helping The Dabbler in its quest to bring you further free loveliness throughout the next year and beyond.

For the literary type

You really can’t go wrong with a subscription to Slightly Foxed. Any book-loving recipient will be eternally grateful.

Or for a seasonal stocking-filler, try the Christmas Fox – and don’t forget you can still enter our competition to win a free copy!

For the comedy lover

For the outdoor type

Ian Vince’s book The Lie of the Land is described by the Daily Express thus: ‘Takes the reader on an explosive journey across millenia. Continents glide thousands of miles like contestants in Strictly Come Dancing, Scotland swelters on the Equator and Snowdonia boasts a volcanic ring of fire with mountains taller than Everest.’

You can buy the book on Amazon, or even better, get a signed copy direct from the British Landscape Club shop.

For some reason The Guardian has all the best nature writers. Martin Wainwright’s True North actually justifies the existence of that strange and little-known half of England….

….Meanwhile, Patrick Barkham’s The Butterfly Isles is perfect for the lepidopterist in your circle of acquaintance.

For the serious drinker

101 Whiskies to Try Before you Die by The Dabbler’s drinks correspondent Ian Buxton… self-explanatory really.

For the sporty type

Jon Hotten’s The Years of the Locust, a true account of the murder of a grotesque boxing promoter, is one of the most compelling and thought-provoking books I’ve read for a long while. Think ‘In Cold Blood’, but with more punching.

For the eclectic Anglophile

Philip Wilkinson’s The English Buildings Book is the Bible of its genre – a unique work. And if you’ve been enjoying the BBC series The High Street, Philip wrote the book for that, too.

Alexandra Harris’ book Romantic Moderns this week won the Guardian First Book award and was described by Peter Conrad at the Observer ‘Book of The Year’ awards as “A spectacular debut by a gifted and versatile cultural historian – a study of Englishness that roves from literature to art, music and film as it travels around a rural England of gargoyled churches, eccentric houses and pebbly beaches. A beautiful book; also, with its bucolic end-papers and its cornucopian illustrations, a beautiful piece of book-making.”

And finally, for the gibbering lunatic squelching in a bog…

You simply have to buy Frank Key’s Impugned by a Peasant.

4 thoughts on “The Dabbler recommends…Books for Christmas”