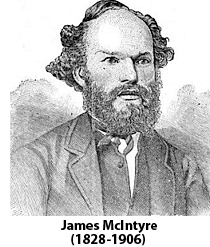 Though never attaining the heights of William Topaz McGonagall (they are unattainable), James McIntyre has a decent claim to being one of the English language’s greatest bad poets.

A Scottish-born Canadian furniture-manufacturer, what McIntyre lacked in poetic talent he made up for in narrow specialisation: odes to cheese. He just loved the stuff.

This is from Oxford Cheese Ode…

The ancient poets ne’er did dream
That Canada was land of cream,
They ne’er imagined it could flow
In this cold land of ice and snow,
Where everything did solid freeze
They ne’er hoped or looked for cheese.

…while in Dairy Ode we receive this warning about cheese made too early in the year:

Our muse it doth refuse to sing
Of cheese made early in the spring,
When cows give milk from spring fodder
You cannot make a good cheddar.

The quality is often vile
Of cheese that is made in April,
Therefore we think for that reason
You should make later in the season.

But McIntyre was a dreamer. Behold his vision in Prophecy of a Ten Ton Cheese…

Such a massive cheese, claims McIntyre, would be “the greatest honour to our land”, with “power to move British empire.” In fact, he predicts that the ten ton cheese would be so great a human achievement that…

… we shall see it at world’s fair.
And view the people all agog, so
Excited o’er it in Chicago,
To seek fresh conquests queen of cheese
She may sail across the seas,
Where she would meet reception grand
From the warm hearts in old England.

Gratifyingly, McIntyre was to glimpse something like his dream of a ten ton cheese. This he eulogised in his most famous poem, Ode on the Mammoth Cheese (Weight over seven thousand pounds) which I replicate in full below. This poem has everything: a relentless rhythm, the genius rhyme sequence ‘scar as/Harris/far as/Paris”, and, in the final stanza, surreal beauty and a perfect closing line….

Ode on the Mammoth Cheese
Weight over seven thousand pounds.

We have seen thee, queen of cheese,
Lying quietly at your ease,
Gently fanned by evening breeze,
Thy fair form no flies dare seize.

All gaily dressed soon you’ll go
To the great Provincial show,
To be admired by many a beau
In the city of Toronto.

Cows numerous as a swarm of bees,
Or as the leaves upon the trees,
It did require to make thee please.
And stand unrivalled, queen of cheese.

May you not receive a scar as
We have heard that Mr. Harris
Intends to to send you off as far as
The great world’s show at Paris.

Of the youth beware of these,
For some of them might rudely squeeze
And bite your cheek, then songs or glees
We could not sing, oh! queen of cheese.

We’rt thou suspended from balloon,
You’d cast a shade even at noon,
Folks would think it was the moon
About to fall and crush them soon.