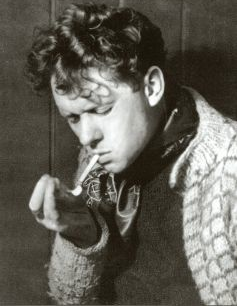 Ben Atherton is a Brisbane-based journalist, dad, misty-eyed expat and sometime blogger on books and bookmen at Biblioparrot. We welcome him to our small (and virtual) piece of the old country here at The Dabbler.

Back in the good old days, when I was trying to get my first job on newspapers, a standard interview question was: “Why do you want to become a journalist?”.

The standard answer always began with platitudes about an “enjoyment” of writing and “reading newspapers”, before being airily expanded to take in some sort of notion of “service to the local community”.

But if I’d been honest I would have told them that I’d been reading too much Hunter S Thompson and wanted to be like the young reporter from the Dylan Thomas story Old Garbo. Embarrassing but true.

I can remember when I first encountered Dylan Thomas. It would have been about 1980, in the pages of Look and Learn, a magazine for swotty schoolkids to which I was almost religiously devoted.

I’m not sure why the editors of Look and Learn thought that a profile of one of English language literature’s biggest piss-heads would be suitable reading for their audience of impressionable young scholars, but there he was, complete with a full-page drawing depicting the poetical menace – looking like a wild-eyed schoolboy – scandalising a dinner party by pelting the guests with bread rolls.

From memory, the article glossed over the role the demon drink played in this outburst, leaving me rather puzzled about (a) what a dinner party actually was, and (b) why grown-ups would act this way.

I think I put it down to an excess of poetical temperament, an as-yet-undefined quantity which exerted a growing fascination on me from then on.

Now then, where was I?

Old Garbo, from Portrait of the Artist as a Young Dog, is a loosely autobiographical tale about a young reporter trying to get in with Mr Farr, the senior reporter on his Welsh paper, the Tawe News.

“He was the senior reporter, a great shorthand writer, a chain-smoker, a bitter drinker, very humorous, round-faced and round-bellied, with dart holes in his nose.”

Mr Farr covers “all the big stories, the occasional murder, such as when Thomas O’Connor used a bottle on his wife …. the strikes, the best fires.”

Young Thomas plays court to Mr Farr and is rewarded with an invitation to a Saturday night pub crawl down the docks, where, slightly mysteriously, “you can see the sailors knitting in the public bar.”

The best bit for me comes at the start of the night, in the back room of the Three Lamps.

“I leant against the bar, between an alderman and a solicitor, drinking bitter, wishing that my father could see me now and glad, at the same time, that he was visiting Uncle A. in Aberavon. He could not fail to see that I was a boy no longer, nor fail to be angry at the angle of my fag and my hat and the threat of the clutched tankard. I liked the taste of beer, its live, white lather, its brass-bright depths, the sudden world through the wet brown walls of the glass, the tilted rush to the lips and the slow swallowing down to the lapping belly, the salt on the tongue, the foam at the corners.”

That “sudden world” glimpsed through the walls of the glass – it’s like a gospel of delight for drunkards.

Anyway, this was the world I thought I was entering as a journalist 60-odd years after the story was written.

A world of pub backrooms, death knocks, intrigue, parades of (in this case Welsh) grotesques, camaraderie, and easy-going drunkenness.

It was a dying world I thought I glimpsed in the early days, when one paper I tried to get a job on still had its printing press downstairs, filling the offices with the smell of ink and hot metal, and reporters repaired to the back rooms of poky little boozers at regular intervals.

But I soon found out that death knocks are no fun, houses that have been burnt out leave a stink in your clothes which lingers for days, and trying to make sense of an inquest while suffering with a screaming hangover is not to be recommended.

Looking back, even at this distance my capacity for magical thinking is wince-inducing.

The only two books I’ve ever stolen in my life were by, or about, Dylan Thomas. One of them has Old Garbo in it. No, I’m not proud of it.

What books or writers have led you astray – and did you enjoy it?

13 thoughts on “Dylan Thomas: his part in my downfall”