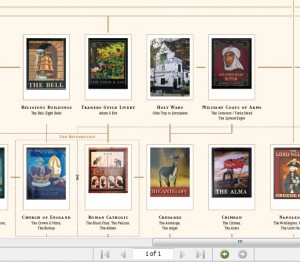 Click for the full PDF of the Pub Tree

A little while ago The Dabbler stumbled across this rather extraordinary and wonderful project – a  family tree tracing British pub names and signs.

British pub signs are one of the great features of our cultural landscape and, you might say, our psychogeography (I know one lady who can only navigate, and give directions, by reference to pubs – thus something is never ‘a few miles north of here’ but ‘you get to it by turning left at the Rose and Crown, keeping on til you get to the White Lion, then turn right’…etc).

The pub genealogist himself – graphic designer Jonathan Chadwick – has kindly supplied us with an up-to-date version of the Pub Tree (click the image for the full PDF), and an explanation of the theory behind the project…

Last year I began my MA, in Design and Art Direction at Manchester Metropolitan University. After sixteen years in industry working as a graphic designer I was looking to re-enthuse, re-educate and re-train my brain whilst also shifting my skill set towards those more traditionally attributed to illustrators. I recognised that I needed some kind of framework or context to define my studies and within which to reflect on the critical theories I would be considering.

I found everything I would need in the Great British Pub…

There are many resources available concerning Britain’s pub signs and names that aim to explain what they actually mean or stand for. Sometimes these theories concur, other times they might offer different opinions. Sometimes these suppositions might be based on an element of fact and other times it would seem, on myth. Sometimes, I felt the ‘meaning’ might only represent what I would describe as a ‘convenient truth’. Martyn Cornell wrote a very interesting piece along these lines about the origins of ‘The Red Lion’ on his blog, the Zythophile.

I did however begin to recognise that there were certain patterns developing in the themes behind the names and signs of our pubs and this got me thinking. There is something in the human condition that leads us to attempt to categorise things – to make sense of the world around us. For example you might believe in Genesis, The Big Bang Theory or something completely different, but you will have an opinion on how the world began. This can be categorised as being either a scientific or a faith based belief. Naturally then, I began to categorise the origins of different types of pub names and then the categories of those categories. This developed further into a hierarchy or lineage of pub names and began to take the form of something akin to a family tree.

The current form of this typology as presented here shouldn’t be viewed as a finished or definitive piece of work. Since I first planted the seed it has continued to develop, to evolve and grow organically just as any other kind of tree would. Occasionally third parties come along with additional insight or knowledge and tended to my tree, offering advice that would either prune its branches or nourish its roots. On reflection however I have considered that in view of the subjective nature of why any given pub was assigned a particular name, maybe it’s futile to even attempt to reconcile conflicting opinions. On the other hand however can’t we still appreciate or at least have an opinion about a beautiful tree even if it doesn’t bear fruit?

As part of my studies I read “Think/Classify” from “Species of Spaces and Other Pieces” by Georges Perec. Initially I have to admit to taking Perec’s words personally, almost as if they were a direct criticism of me and my list making actions. Only now, several months down the line am I starting to understand perhaps what his intentions in the text were. That maybe the act of developing my tree as a means of visually understanding where our pub names comes from was as ill considered as if I’d just presented them in a random list? If the conclusion is to be that there is no definitive article, maybe I have been ‘urgently’ producing ‘trivia’? The key, I believe, in understanding Perec’s work and my Pub sign family tree can be found in the following lines from the text:

In every enumeration there are two contradictory temptations. The first is to list everything, the second is to forget something… Thus, between the exhaustive and the incomplete, enumeration seems to me to be, before all thought (and before all classification), the very proof of that need to name and to bring together without which the world (‘life’) would lack any points of reference for us.

I think I owe that man a beer…

10 thoughts on “The Genealogy of British Pub Signs”