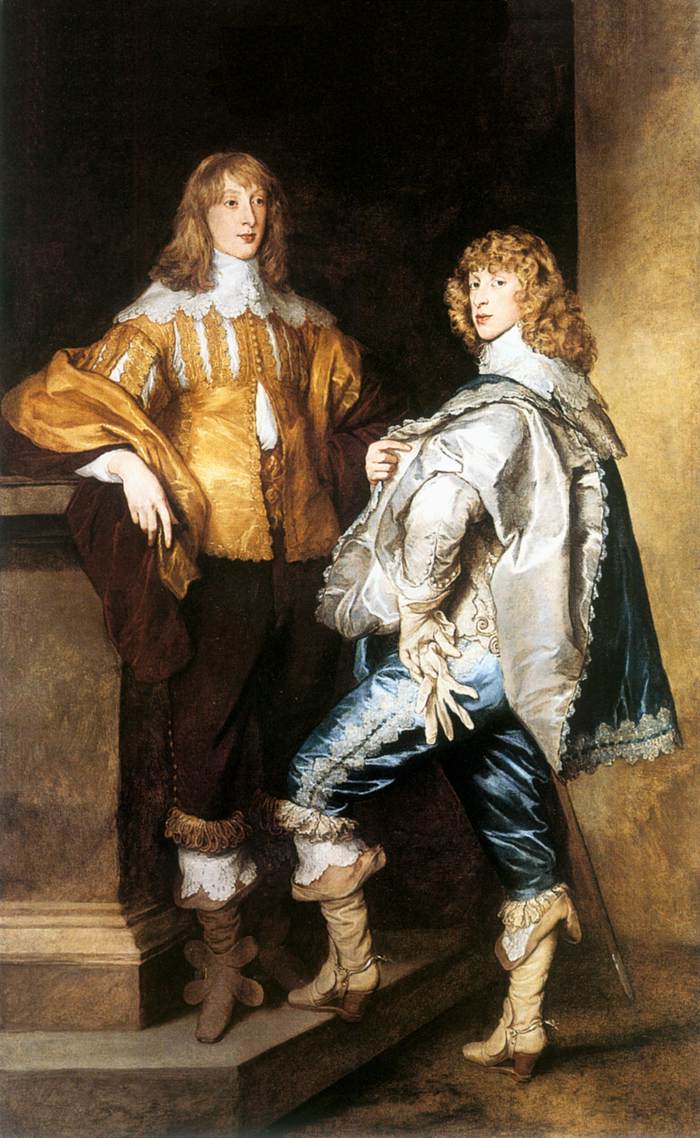 In a room full of paintings, why does a particular one leap out? Practically every painting in the National Gallery would probably leap out if it were instead displayed in a common-or-garden gallery, so a painting housed here must have a very high degree of leap-outishness indeed if it is to perform the trick.

I can’t say exactly why Antony Van Dyck’s double-portrait first leapt out at me, other than because of its luxurious colours and the extreme foppery of its subjects’ poses. What a pair o’ ponces, I thought, mirthfully. But whereas some art is diminished by narrative explanation, the more you learn about this one, the more striking it becomes.

The young men portrayed are Lord John and Lord Bernard Stuart, sons of the Duke of Lennox and cousins of the doomed monarch King Charles I. They could hardly look wetter if they tried, could they? Alabaster skin, golden spaniel hair and huge Stuart conks. Their mirrored three-quarter profiles and unnaturally co-ordinated front feet create the vague sense that they are engaged together in some sort of foxtrot. Lord John (left) is the elder brother, leaning contemplatively, his expression entirely placid. Lord Bernard is lower on the steps, as befits his junior status, but is arranged in an aggressively foppish and complicated ‘I’m a little teapot’ stance (a sketch for which survives in the British Museum). John, it seems, is the thinker; Bernard is the do-er.

Yet it turns out that these characterisations are inaccurate. Contemporary literature describes John has having a ‘rough and choleric nature…not delighted with the softness of the Court’ but ‘dedicated… to the profession of arms.’ Bernard, meanwhile, had ‘a most gentle, affable and courteous nature.’ Looking again at the painting, this knowledge somehow confers a layer of poignancy; they are posing within poses. It is as if neither boy could live up to the demands of image (just as none of us can live up to the permanent joy of family photo albums), and as if each is trapped in a pre-ordained role (as royals are to this day).

There is a further layer of poignancy. A few years later, both John and Bernard were to die in the Civil War. Knowing this, the setting seems ominous: they stand on the steps as if waiting for the carriage that will take them away, ultimately, to battle and death. Those grinning photographs of uniformed doomed youth heading off to one the 20th Century’s horrors are always rather heartbreaking, aren’t they? As indeed are most lively snapshots of the now deceased: we are all doomed but not one of us knows the hour. Looking again, the fops aren’t funny anymore.